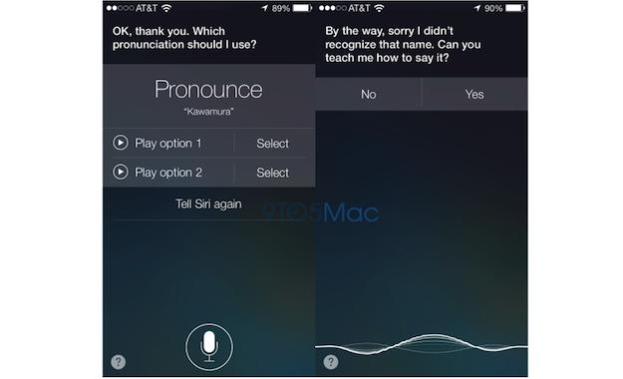 As developers continue to explore the beta version of iOS 7, so more features not discussed during the WWDC 2013 keynote become known. The latest relates to Siri, Apple’s virtual assistant introduced with the iPhone 4S and iOS 5, who thanks to a clever learning feature will be better at pronunciation in iOS 7.

A reader of 9to5mac.com highlighted the alteration, and so far it seems to be limited to names, but there’s not reason why it couldn’t be adapted to work for all words. Apparently, if Siri is having trouble correctly pronouncing a name, it’ll now ask for clarification, based on previous attempts, or you can manually prompt Siri to learn the name.

From the screenshot, it seems Siri may provide several choices and you get to select the correct one, or you can tell it, “That’s not how you pronounce X name,” and Siri will go to a learning phase. Siri has never excelled at pronouncing names which aren’t in English, and attempts to dial or message a contact have meant the user adapting to Siri’s ways instead of the other way around.

This is just one area where Siri will be improved in iOS 7, as not only will you be able to choose between a male or female voice (at the moment, Siri is female in the U.S. and male in the UK for example), but you’ll also be able to ask it to turn on Bluetooth, check voice mail, post to Twitter or even adjust the brightness of the screen. When asked a question, Siri will check Bing search and Wikipedia too.

Siri’s ability to learn complex names isn’t the only new iOS 7 feature to be revealed after the software’s announcement. A hidden menu has shown Apple is still tweaking the OS’s final look, and contemplating new gesture controls, while code has shown LinkedIn may receive the same degree of deep integration as Facebook and Twitter.

You can read everything we know about iOS 7 so far here, but you’ll have to wait until the fall for its public release.