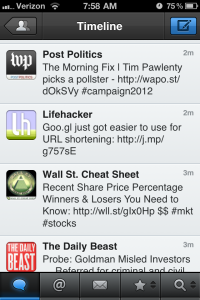 Despite sudo-demands by Twitter that third-party developers no longer release clients that replicate Twitter’s functionality, the folks at TapBot have launched a new app for iPhone, Tweetbot, that could unseat Twitter’s official app as the go-to mobile software.

Last night’s release of Tweetbot immediately had Twitter abuzz with micro-chatter about the new client, which doesn’t bode well for Twitter’s quest to keep its official Twitter for iPhone app the primary mobile client.

Unlike Twitter for iPhone, which is free, Tweetbot costs $1.99 to download. For that, users get a smooth functionality with a dose of cool personality in the form of sounds, animations and graphics that add to — rather than distract from — the experience.

As many will notice, Tweetbot’s user interface is reminiscent of the official Twitter app, but with heavy bit of polish that Twitter for iPhone lacks.

One of the first major features delivered by Tweetbot is the addition of “multiple timelines,” which allows users to view their lists in place of their full feed. So, if you only want to see tweets by a certain group, rather than the fire hose flowing from everyone you follow, simply tap the timeline bar at the top of the app screen, and pick which list you’d like to view.

Other useful Tweetbot perks include the ability to easily view conversation threads, and “smart gestures,” which allows a wide variety of functionality, like reply-to, retweet, etc, simply by double- or triple-tapping the tweet. Tweetbot also lets users customize their tab bar at the bottom of the screen, so their most-used functions can be a touch away.

As TechCrunch notes, Twitter may have doomed its official iPhone app with the launch of the QuickBar (more commonly known as the “dickbar”), which abruptly inserted ads onto users’ timeline screens, and shattered confidence in Twitter’s ability to maintain the app’s clean functionality.

The QuickBar is now dead. What remains to be seen, however, is how peppy Twitter for iPhone will be after more users get a feel for the smooth running gun of Tweetbot.

We’ve only had a short time to explore the app, so far. For a complete (and highly positive) rundown of Tweetbot and all its shiny bits and pieces, check out Shawn Blanc’s review here.

Video-editing app LumaFusion to get a Galaxy Tab S8 launch
The iPhone 14 Pro’s Dynamic Island needs to get a lot more useful, fast
Forget Apple’s newest iPad — the Galaxy Tab S8 should be your next tablet
How to unlock a phone on every carrier in 2022
I thought iOS 16 would ruin my iPhone 8, but it shocked me
Don’t listen to billionaires like Elon Musk — app stores are fantastic
The best Samsung Galaxy S22 Ultra screen protectors for 2022
The most innovative tablets of 2022
Sunbird looks like the iMessage for Android app you’ve been waiting for
The most innovative smartphones of 2022
The most innovative smartwatches and wearables of 2022
These 6 things could make the Pixel 7a the perfect Google phone
Best Cyber Monday Tablet Deals: iPad, Amazon Fire, Samsung Galaxy Tab