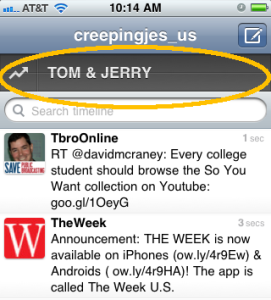 Less than a month since its release, the widely despised QuickBar feature in Twitter’s official iPhone app has been removed, the company announced today.

Commonly known as the #Dickbar, this obnoxious tab sat constantly at the to top of the app screen. It’s purpose, said Twitter, was to keep users abreast of all the latest trending topics. In reality, however, it was a way for the company to more prominently display its promoted tweets to its mobile users.

Twitter says that the QuickBar was “a new feature we wanted to test,” and was “seen as a potential means of in-app notifications for new @mentions, DMs, and other important activity.” But after all the complaints about the feature, it was time for the QuickBar to die.

“After testing a feature and evaluating its merits, if we learn it doesn’t improve the user experience or serve our mission,” says Twitter, “we’ll remove that feature.”

The QuickBar’s mocking moniker, “DickBar” was originally coined by Daring Fireball‘s John Gruber, who used the term in a tweet complaining about the update. The term quickly took off, and appears to have become more widely used than the official QuickBar name.

Just because the QuickBar is now a thing of the past doesn’t mean Twitter won’t release something similar (but hopefully improved) in subsequent updates of its app. In fact, it’s nearly assured that they will — even the unpopular QuickBar had “incredibly high usage metrics,” according to Twitter’s internal count.

“We believe there are still significant benefits to increasing awareness of what’s happening outside the home timeline,” says Twitter. “Evidence of the incredibly high usage metrics for the QuickBar support this. For now, we’re going back to the drawing board to explore the best possible experience for in-app notification and discovery.”

Hopefully, their next creation won’t ignite such a backlash.

Twitter’s SMS two-factor authentication is having issues. Here’s how to switch methods
How to use Twitter Advanced Search
YouTube brings pinch to zoom and video navigation changes to everyone
How to create multiple profiles for your Facebook account
Having trouble accessing your Instagram account? You’re not alone
Elon Musk considers bringing Vine back from the dead
Staying on Twitter? Here are two ways to make it easier
Elon Musk now Twitter CEO after firing entire board
Twitter Blue is losing Ad Free Articles and Musk’s latest tweets indicate further changes
Clear Mode on TikTok: Here’s what it is and how to use it
Twitter’s edit button could soon be free for all users
Instagram to soon let creators make NFTs and sell them to fans
Elon Musk to cut half of Twitter workforce, report says