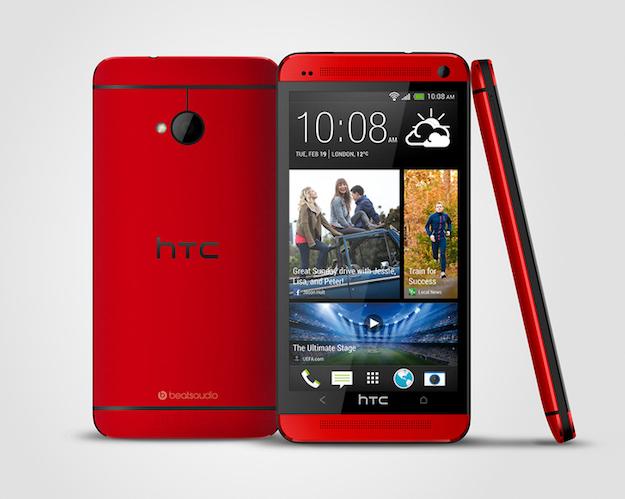 When the HTC One was announced back in February, a red version of the phone appeared alongside the standard black and silver models, before being rudely removed from HTC’s website, never to be seen again. Today, it has made an official reappearance as a UK exclusive model.

Phone retailer Phones4U has snapped up the device, and HTC has named the color Glamour Red. The good news is there has been no alteration to the One’s body shell, so that’s a red aluminum casing you’re seeing in the pictures above, not polycarbonate. We think it looks fantastic, particularly thanks to the black accents, and it’s sure to look even better in real life.

The phone hasn’t changed, and still has a 4.7-inch, 1080p touchscreen, the UltraPixel camera, a quad-core 1.7GHz Snapdragon processor, and HTC’s BoomSound stereo speakers. Android 4.1 Jelly Bean and the HTC Sense 5.0 user interface are displayed on the screen, and Beats Audio enhancements are also included. According to Pocket-Lint, Phones4U will offer the red HTC One for free with a £33 per month, two year contract, which is likely to be with Vodafone and come with 500MB of data, unlimited SMS, and 600 free minutes.

There’s no word whether the Glamour Red (which would probably have to be renamed Glamor Red) HTC One will make it to America, but given the color, Verizon would do well to pick it up. However, anyone looking to buy a special HTC One in the U.S. can now select the Google Edition, which went up for sale through Google Play this week for $599. For this, you get standard Android Jelly Bean and no HTC Sense interface, plus the device is unlocked and ready to use on AT&T and T-Mobile’s 4G LTE networks.

If you’re in the UK and want the red HTC One, it’ll go on sale in mid-July.