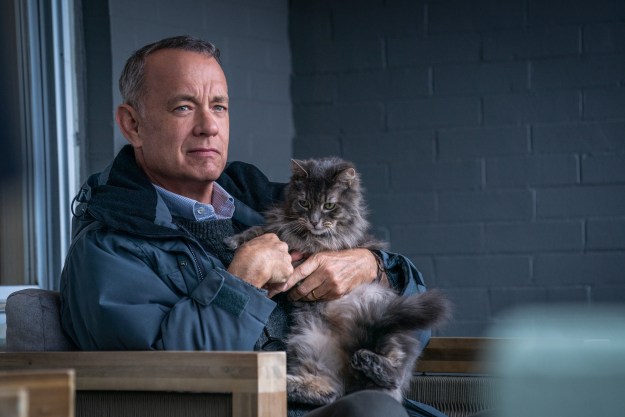 “A Man Called Otto is a straightforward drama that often veers too far into sentimentality but is nonetheless frequently saved by Tom Hanks' reliably charming lead performance.”

A Man Called Otto is the kind of straightforward, inoffensive dramedy that used to be incredibly common. Nowadays, Hollywood seems less and less interested in producing movies like A Man Called Otto, though, even during the end-of-the-year holiday season that has always seemed well-suited for middling-budget, family-friendly dramas like it. That fact doesn’t make A Man Called Otto a particularly unique or boundary-pushing film. It does, however, make it feel like a relic from a different time.

That’s OK, because Otto, as played here by Tom Hanks, is a bit of a relic himself. Not only is Hanks’ likable curmudgeon one of the oldest residents of his Midwest neighborhood when A Man Called Otto begins, but he’s also desperate to shuffle off this mortal coil as quickly and efficiently as he can. Of course, Otto isn’t nearly as stone cold as he makes himself out to be, nor is his desire to die as unwavering as he claims. His path from embittered pessimist to renewed optimist is clear from the moment A Man Called Otto begins, and the film itself doesn’t have too much to offer in terms of ingenuity or originality.

The film is, in fact, exactly what any reasonably well-versed moviegoer may expect it to be, but that doesn’t mean it’s without its charms.

A Man Called Otto is the second film adaptation of Fredrik Backman’s 2012 novel,A Man Called Ove, which was previously adapted as a Swedish-language movie in 2015. Both Backman’s original novel and director Hannes Holm’s 2015 adaptation tell virtually the same story as A Man Called Otto. The new film follows Hanks’ grumpy older man as his attempts to end his life are repeatedly interrupted by the sudden arrival of his newest neighbors, Marisol (a scene-stealing Mariana Treviño) and Tommy (Manuel Garcia-Rulfo), as well as their two plucky young daughters.

It isn’t long before both Marisol and Tommy have inserted themselves into Otto’s life. In doing so, they open the door for Otto’s past to be explored via a series of often saccharine flashbacks that offer glimpses into Otto’s marriage to Sonya (Rachel Keller), who died just a few months prior to Marisol and Tommy’s arrival. Sonya’s death, combined with his forced retirement, briefly but understandably render Otto uninterested in life. Fortunately, his unexpected friendship with Marisol gives Otto’s previously sweet self the chance to reemerge.

The film’s story is not, by any means, a particularly original one. Marc Forster’s direction and David Magee’s open-hearted screenplay don’t go out of their way to inject many new surprises or instances of structural invention into A Man Called Otto, either. Instead, the film is perfectly content to rely solely on the dramatic strength of its undeniably simple story and the performances given by its cast members.

Thankfully, Forster’s instincts aren’t totally off base in A Man Called Otto, a film that has, among other things, Tom Hanks going for it. As Otto, Hanks alternates between cartoonishly grumpy and understatedly sorrowful with the kind of precision that only a performer as experienced as him could muster. Throughout the film, Forster effectively juxtaposes Hanks’ seasoned, unassuming presence with the live-wire energy conjured by his scene-stealing co-star, Treviño. Together, Treviño and Hanks make for an infectiously likable duo.

The two stars’ chemistry is so good that A Man Called Otto is often at its best whenever it’s focusing on Marisol and Otto’s growing friendship. Otto’s relationships with several of his other neighbors, including the endlessly joyful Jimmy (Cameron Britton), provide the film with moments of effective humor and heart as well. However, while Hanks’ real-life son, Truman, makes for a believable version of Otto’s younger self, the flashbacks involving him and Keller’s Sonya are often so one-note that they add little except extra minutes to A Man Called Otto’s runtime.

In addition to the film’s superfluous flashbacks, Forster makes a handful of creative mistakes throughout A Man Called Otto, including one badly timed needle drop. Magee’s script also invests little time in setting up or exploring Mike Birbiglia’s unnamed real estate agent, who just so happens to be the closest thing the film has to an antagonist. Altogether, these decisions lead the film toward a strangely lackluster climax. The film itself also runs about 10 or 15 minutes longer than it should, which similarly takes some of the weight away from A Man Called Otto’s otherwise bittersweet final moments.

For all of its faults, though, A Man Called Otto still succeeds solely on the power of Hanks and Treviño’s performances. The film is not, by any means, as cohesive or emotionally stirring as many of its team members’ previous efforts, but it’s a harmless and charming affair nonetheless. Ultimately, that’s just another way of saying that A Man Called Otto really is just like the family-friendly, end-of-the-year dramas that Hollywood used to annually put out, the best of which could be relied upon to supply enough laughs and heartwarming moments to justify their holiday-timed releases. A Man Called Otto, for its part, does just that.

A Man Called Otto is playing in theaters now.

God’s Creatures review: an overly restrained Irish drama
Blonde review: a striking and tough Marilyn Monroe biopic
Meet Cute review: Peacock’s time travel rom-com falls flat
Pearl review: a star is born (and is very, very bloody)
How to watch 1883 online: where to stream Yellowstone prequel
M. Night Shyamalan explains how he tells stories in Knock at the Cabin featurette
2023 Oscars: where to watch all the Best Picture nominees
The most likable characters on That ’90s Show, ranked
The 10 most popular TV shows on Netflix right now
Where to watch Jurassic World Dominion
The 10 most popular movies on Netflix right now
5 upcoming horror movies you have to see in 2023
The best MCU fights, ranked