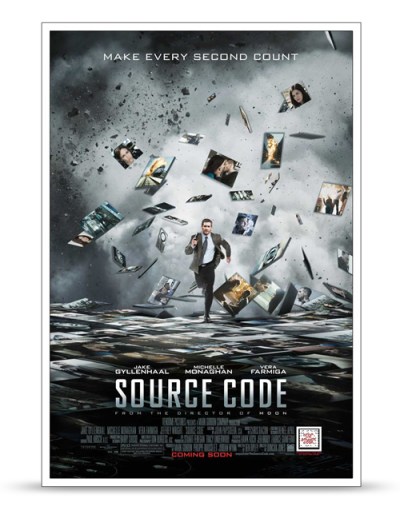 Director Duncan Jones (Moon, Whistle) is a fan of science fiction in the truest sense. Where most films in the genre these days lean heavily on fantasy, his films use fictional science to create a believable world. The logic of the science is sometimes stretched thin, but it is generally just the backdrop for a drama that is set against it. In Moon, the science fiction aspect was used to give birth to an original drama that couldn’t exist in the natural world, but could be believable in the framework of that film, and Source Code is similar in its approach.

Source Code is a thriller, a mystery, a drama and a science fiction film all rolled up into one. You begin with one primary mystery, but soon realize that what you thought was the point of the film was actually just the motivating force that leads to the real drama—then once you understand that, the movie changes course again and becomes a different type of film. With so many emotions and themes running wild in this movie, it would have been easy for them to cancel each other out, but instead, Source Code is the best science fiction movie of the year so far — as long as you can accept the somewhat dubious logic behind the science.

To Serve Your Country

I don’t want to give away too much about the Source Code, because much of the drama and impact of the film comes from the surprises, especially the “big one” that the film drops on you about half way through. In fact, the best comparison to the surprise is probably Moon (which I will not spoil, but if you have heard anything about that film then you probably know the truth about the character that is revealed about half way through).

Source Code is about an Army helicopter pilot named Captain Colter Stevens (Jake Gyllenhaal), who wakes to discover that he has become part of a government experiment and is asked to put aside his confusion to serve his country and help prevent a disaster. A bomb has recently gone off on a train outside of Chicago, and the bomber has threatened to detonate a dirty bomb in the heart of the city. There are no clues as to who is behind the threats, so a new and secret project is activated.

The “source code” is a program that allows the test subject to relieve the last eight minutes of a particular person’s life. The theory is that each person contains a short-term memory that can be explored and expanded on, and while in that eight-minute cycle, you are essentially in an alternate reality that allows you to explore and interact with your surroundings. It is more than a memory, it is real, but it is also a frozen moment in time that cannot be used to affect the present or future. It is not real, and yet in a sense it is.

Stevens is suddenly thrust into the life of a passenger on board the doomed train, and tasked by his government handlers, Captain Carol Goodwin (Vera Farmiga) and her boss played by Jeffrey Wright, to repeat the eight minute loop until he can identify the bomber and help prevent the larger impending attack. Time and again he restarts the scenario, and each time he must find clues before he experiences death.

Complicating matters is Christina (Micelle Monaghan), a friend of the man who Stevens is inhabiting. As he repeats the loop, he slowly gets to know her, and is compelled to find a way to save her despite the impossible nature of their relationship.

That is the groundwork for which the movie is set, and while the threat of the bombing and the task Colter is given to find the man responsible is the thread for which the rest of the movie dangles, it actually becomes secondary to the truth of what the source code is, and the secret of Stevens himself.

To go into more detail would be to spoil it, and while many might guess the twist, even if they do, it is just something that allows a new level of drama to unfold. It works throughout, and while this movie is not exactly uplifting, it does offer a satisfying conclusion—as long as you can move past some of the scientific plot holes and paradoxes.

The Science of Source Code

You just have to go with the train of logic that allows one person to step into a dead person’s reality for eight minutes. The film defends the science by essentially dismissing it. The key idea behind the science is that it is based on quantum theory, which is loosely broken down to mean that each possible reality is actually an alternative reality until the timelines reconnect.  If you want to call it magic instead, that is probably fine too. The film doesn’t really go into the details much, which is probably for the best, but it does require that you accept the logic it imposes, because much of the drama of the film is based on these “scientific” assertions.

When you reach the climax and conclusion of the film, there are a few paradoxes that are created by the film’s own scientific logic, and while they are minor and you can probably explain them away with effort, if you are a person who is deeply committed to realism in film, this movie will be your nemesis.

Despite that, the science established in the film—real or not—creates an interesting scenario that could only exist under these circumstances. As a result, Source Code manages to do something that is almost unimaginable in Hollywood these days by creating an original film based on original ideas. You won’t have seen the story before, and the situations are unique to this film. That alone should be enough to excite fans of film.

Source Code is a well-made film from start to finish, and Jones is a rising star amongst directors. Gyllenhaal plays the role well, but there seems to be a growing, and somewhat unfair backlash against the actor of late. If you are not a fan, nothing he does will convince you otherwise, but if you like him or are just impartial, he turns in a solid and likable performance.

Perhaps the two most difficult — and best-executed — performances in the film rest with Farmiga and Monaghan. Farmiga plays Stevens’ contact, Carol Goodwin, and the role is a complex one. You know she is hiding something, and yet her duty takes precedence over her feelings. As the mystery unravels and the drama begins, Goodwin becomes more and more important to Stevens, and her role is vital to the climax of the film. The less said about what she does the better, but Farmiga takes a difficult role and handles it exactly right.

Monaghan has the difficult job of replaying the same role over and over. Her character of Christina is connected to the person that Stevens lives through, so each time he restarts the eight minutes, she is there repeating the same lines again and again. It isn’t until one of the later times you see her die—there is one moment in particular where she dies slowly, with a heartbroken and confused look on her face—that you realize that you are actually rooting for her. She is the ultimate victim in this movie, trapped to relive a tragedy again and again, but with no sense of anything bigger beyond her. Monaghan will likely receive less credit for her part in the film than Gyllenhaal, Farmiga or Jones, but she turns in a fantastic performance.

There is one notable flaw on the technical side, though.  The music seems to be lifted from another movie at times, and just absent at others. It was apparent right away that the music felt off, and afterwards I did a little digging and read that the original composer, Clint Mansell, was forced to back out late in the process due to time constraints, and he was replaced by Chris P. Bacon. Last minute changes like these are never a good thing, and this one is no exception. You eventually tune the soundtrack out, but it stands out as being bad—or at least being off.

It is hard not to discuss the twists and turns of Source Code. Some people will love them while others won’t, but you can’t deny the film’s originality. The ending will also have people talking, and while I enjoyed it, many won’t be able to look past the scientific paradoxes and problems inherent in the nature of the logic it uses.

Jones has quickly made a name for himself as a director of science fiction, but his talents are well suited in character development regardless of the genre. He is at the beginning of his career, and odds are it will be a long and fruitful one. All the actors turn in solid performances which credits them and Jones both, and (with the exception of the music) the film handles a complex and original story exceedingly well.

If you are looking for an original movie with themes of mystery, drama and science fiction, then Source Code should be at the top of your list.