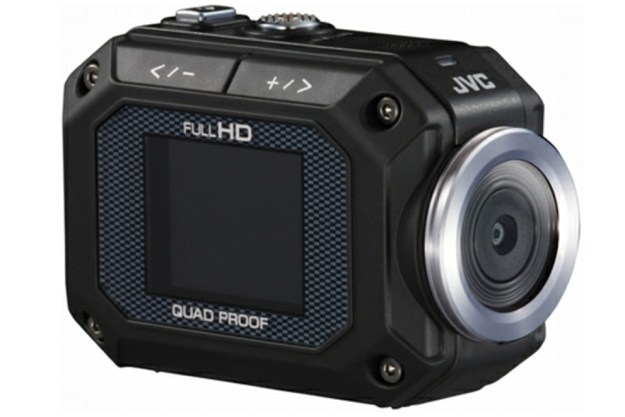 “Overall, the JVC GC-XA1 is a rugged, lightweight, and good-quality HD POV camcorder. Like its namesake, you just might get addicted to using it.”

A camcorder that’s designed to capture action sports needs to be as tough as nails as the daredevils who pull off those stunts, and the JVC GC-XA1 ADIXXION rugged POV camcorder ($299) is just that. It’s shockproof up to a 6-foot drop, waterproof down to 16 feet underwater for 30 minutes, dust proof, and freeze proof – “Quad-Proof,” as JVC calls it. It’s small and lightweight, weighing less than 4 ounces – so it can be attached to all parts of your body without weighing you down. It shoots good-quality video at 1080p, however, it isn’t the best we’ve seen from a POV cam.

The XA1 captures video in high-definition up to 1080p/30 frames per seond resolution; it also supports 960p (30 fps); 720p (60 fps, 30 fps); WVGA (30 fps). That’s quite versatile, ranging from Blu-ray resolution down to a quality suitable for the Web (in specs). A wide-angle (170-degree field of view) f/2.8 fixed focal length lens captures all the video and stills. Still image capture in Photo Mode is a modest 5-megapixel resolution.

Aside from standard video and still image capture, there are other shooting modes: Endless Recording, Time Lapse, and Picture Inversion. The instruction manual does a poor job explaining what Endless Recording does, but it is a special feature that lets you to capture the key moment of a video sequence, even if you were late in starting the recording. Here’s how it works: When Endless Recording is enabled, video is constantly being buffered into the camera, just not saved; when you finally click on the Start/Stop button, only the previous 15 minutes of video actually gets saved to the memory card. It’s not a must-use feature, but it can help you capture an elusive moment, as long as it’s 15 minutes or less. Time Lapse mode speeds up time by creating a video based on capturing a single frame of video every second or every 5 seconds. Picture Inversion allows the camera to be used in a more convenient upside-down mode, but to invert the image properly. Another handy feature, Digital Image Stabilization (DIS) smoothes out camera motion, especially useful if the action shakes the camera a lot.

The XA1 has robust built-in Wi-Fi feature set: You can stream video to an iPhone or an Android smart phone (via JVC’s WiVideo app); stream video to a PC; and set up a channel via the U-Stream service to “broadcast” video. To enable the Wi-Fi features, you’ll first need to install the latest WiVideo firmware and software from JVC’s website.

What’s In the Box?

Packed along with the XA1 camera, there is the rechargeable Li-Ion battery, USB cable, goggle and flexible mounts (for attaching the XA1 to your ski goggles, bicycle, helmet, etc.) two flexible adhesive bases, screwdriver, attachment screws, and a Basic User Guide.

To check out the camcorder’s video recording capabilities, we used it in a variety of scenarios. In one test, we took our mountain bike out to Corriganville, a local park in Simi Valley, California famous for its rocky terrain, which made it a perfect backdrop for western movies in the 1930s and 40s. We attached the XA1 directly to a repurposed bracket for a bike reflector and mounted it firmly to the front handlebar. In this test, we were particularly interested in how the XA1 recorded audio with its built-in microphone. The terrain was fairly bumpy, so we picked up a lot of vibration noise from the bike. Using the provided mount fixtures with helmet or goggles instead of our jimmy-rigged approach would have yielded less noise, because one’s body acts as a shock absorber. We discovered a way to minimize the wind noise by covering up the microphone port with tape.

With this test, we encountered the image wobble or “rolling shutter” effect that’s common on all HD camcorders using CMOS sensors at lower frame rates (30 fps), and is exaggerated with fast moving subjects. The way around this is to shoot at a higher frame rate; most POV action sports videos are shot at 720p/60 fps to minimize this rolling shutter problem.

In another scenario, we attached the XA1 to a small Gorillapod tripod and mounted it to the dashboard of a car. We wanted something really different, so we chose Time Lapse mode, with a frame rate of 1 fps. The entire 15-minute recorded trip to Corriganville played back in about 30 seconds, for a time lapse “speed-up” factor of 30x. The frenetic activity of automobiles on the road was quite amusing, and it confirmed that the 1 fps setting worked well. Just make sure you secure the XA1 firmly when in this mode.

The lens on the XA1 is very wide angle, which is great for POV video. How does it stand up when used to take photos? Because of the wide angle, objects close to the lens appear distorted, giving them the fisheye “bulge out” effect. Also, because the lens is fixed focus, objects closer than about two feet will be out of focus. There is also a digital zoom up to 5x, so in a pinch you can zoom in on really distant subjects. But the expanded 5x image will degrade since it’s not a true optical lens zoom. Because the XA1 is so small, you might accidentally shake the camera and get a blurry still image. So press that big red photo-capture button gently. It also helps to have image stabilization engaged to help remove camera shake.

The coolest “bell and whistle” of the GC-XA1 is the built-in Wi-Fi. With Wi-Fi activated, you can remotely control the camera and even see the video on your an iOS or Android device. Actually getting the Wi-Fi to work takes some steps, but it’s fairly straightforward and worth doing so. Unfortunately, there’s one drawback: you can watch the camera live, but you can’t simultaneously watch and record it live. When you hit record from the remote control, the live image will freeze. Recording takes place normally, but you just can’t watch it happen. This is a limitation of the current technology, not a problem with just the GC-XA1. We confirmed the same phenomenon with our review of the Drift HD Ghost. If you want to utilize this remote feature, it’s critical to check the placement and framing of the camera through your smart device before you start recording.

To transfer images, you can do it wirelessly in Wi-Fi mode, but that is a very slow process, and not recommended. It’s best to transfer them with a USB cable connected to the USB port, or by removing the SD memory card from the XA1 and inserting it directly into a memory reader. The latter option is better because it eliminates battery drain on the camera.

The XA1’s battery is charged inside the camera via the provided USB cable connected to your laptop/desktop’s USB port; it takes three hours, so it’s best to do this overnight, not right before your activity. A fully charged battery is only good for about an hour of continuous use at the highest 1080P resolution. You can purchase an optional external charger, or carry a spare battery that will cost around $25 retail.

To sum things up, the XA1’s 1080p video that we shot and played back on a HD monitor was good, but not the best, sharpest video we have seen from a POV action cam (like the HD Ghost). Some of our still images seemed a bit soft, especially with distant subjects. This might be due to the single focus lens, or the modest 5MP resolution. The built-in Wi-Fi mode is awesome, allowing us to stream video to our smartphone or PC computer. On the downside, we can’t view and record at the same time. Battery life is too short, and the LCD monitor is tiny at 1.5 inches, but is tolerable with large menu icons and buttons. While no physical remote control is included, there are free remote control applications you can download for your iPhone or Android phone.

Overall, the XA1 is a rugged, very lightweight, HD POV camcorder that takes good quality – not the best – videos.