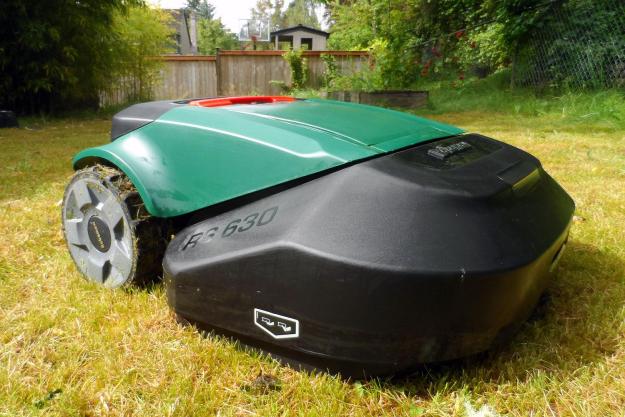 “If you don’t mind dedicating an afternoon to setting it up, Robomow’s flagship RS630 will power through even the most unforgiving terrain and get your lawn looking like a golf course fairway at the touch of a button.”

Mowing the lawn is a calming, zen-like experience for some. For others, it’s a tedious chore to be avoided like Tom Sawyer on fence-painting day. If you’re in the latter camp, we’ve got great news: Technology is here to save the day.

In case you haven’t heard, robotic lawn mowers are totally a thing now. Believe it or not, they’ve actually existed for the better part of the last decade, but it wasn’t until recently that they’ve started to become affordable enough for average consumers.

Nowadays, you can get yourself an autonomous robotic lawn mower for roughly the same price you’d pay for a traditional gas-powered riding mower. But with only a tiny fraction of the population welcoming blade-equipped bots onto their lawn, user reviews are still relatively scarce.

That’s where we come in. We got our hands on Robomow’s flagship RS 630 mower bot and took it for a spin in our backyard; we’ve chronicled our experience with it here to give you an idea of what it’s like. Here’s what we thought of this lean, mean automated grass cutting machine:

Unfortunately, setting up Robomow isn’t nearly as easy as setting up a robotic vacuum cleaner. Robotic vacuums have clearly defined boundaries – walls. Robotic lawnmowers can’t rely on walls, because not all lawns have such boundaries. For this reason, you’ve got to set them up before you can set the bot loose on your Bermuda patch.

The first step defining the boundaries of your yard with a length of green wire and a boatload of stakes. They’re not unsightly and actually blend in fairly well. The wire sits directly on the ground, and the stakes hold it in place right on the surface. The robot actually drives right over the top of the wire to find its way, so these things sit pretty low to the ground and won’t ruin the aesthetic appeal of your lawn – something we were definitely worried about at first.

Still, we’re not going to sugar coat it: Setting up the wires is a pain. You’ve got to make sure they’re relatively straight, flush to the ground, and placed a fixed distance from edges. And if you’ve got obstacles in the middle of the yard you want the bot to go around, you’ll need to align the wires in a specific way so that Robomow understands. It’s a bit of a chore, for sure, but the idea here is that after the initial setup you wont have to mow your lawn manually ever again, so it’s kind of a give-and-take situation.

Getting the stakes and wires into the ground is the hardest part – after that, it’s smooth sailing. Despite being somewhat old school, Robomow’s controls are straightforward — just let it sit on the charging station for a while, toggle the main power switch to “on” and hit the big green “Go” button on the button pad.

The control interface isn’t as intuitive as we’d like it to be, but it also isn’t particularly difficult. Accessing advanced functions like mowing modes, scheduling, and zone control is cumbersome, but as long as you can read the user’s manual, you’ll be fine. And if the physical interface confuses you, you can always download the smartphone app (iOS or Android) and configure it that way.

When people first lay eyes on this bot, they generally describe it as “Roomba for your yard,” and to be quite honest, that’s a fantastic comparison. Robomow hews down your grass in a strikingly similar fashion to the way iRobot’s iconic vacuum bot tackles dirt on your living room carpet. Regardless of the mode you choose, it takes a seemingly random and inefficient route around your yard, bouncing haphazardly from boundary to boundary, yet somehow managing to cover every square inch by the time it’s done. If the bot were to stop in the middle of the job, you’d think a drunk mowed your lawn. Luckily, if Robomow is on the verge of running out of battery power in mid-mow, it’ll return to its home base to charge up for a bit, then finish the job.

Robomow never once got itself into a situation it couldn’t get out of.

There’s no beefy gas-powered engine behind the blades (two silver-plated, roundish, triangle-shaped ones), but they still make quick work of grass, weeds, and other greenery. Unless the bot hits a piece of particularly thick-stalked vegetation, it shouldn’t have much trouble chomping through your yard. It’ll mow through just about anything you point it at, and even has adjustable height controls — but unfortunately you’ll still need to do most of the edging work yourself.

Robomow also doesn’t bag the grass for you, but in our experience, that’s not much of a problem. First of all, this saves you from the trouble of emptying any trimmings, which is great. Second, because you can schedule Robomow to trim the grass more often than you would normally do it yourself – say, every other day—the trimmings it creates are much smaller, and tend to decompose and disappear fairly readily.

It’s also worth noting that because this little bugger runs on an electric motor, it’s extremely quiet — orders of magnitude quieter than a gas mower. This means you can run it at night without having to worry about waking up everyone on the block.

Even if your lawn is filled with bumps, holes, hills, sticks, giant pinecones, and enormous tree roots, Robomow will handle it. The yard we set it loose on was one of the most unforgiving testing grounds you could imagine, but the bot muscled through like a boss.

If it bumps into something solid, it’ll simply stop the blades, kill the motor, back up a few feet, and then start up in a new direction. If the obstacle is still there or it encounters a new one, the process is the same. Robomow just keeps chugging along until it works it’s way out of a trouble spot, returning at some point to finish the area thanks to its random mow pattern.

We were blown away by the type of terrain Robomow could handle: Overgrown grass and weeds barely slowed it, bumps and roots were easily overcome, and pinecones only tripped it up momentarily. Going up and down hills didn’t seem a problem, and even with our yard’s numerous potholes, Robomow never once fell into a situation it couldn’t get out of.

This bot is a tough little bastard, and after seeing it power through the unkempt jungle we call our backyard, we’re confident it can handle most normal lawns. In our testing we did notice one point of weakness … sort of. Due to it’s seemingly randomized navigation pattern, it sometimes has trouble getting to certain sections of the yard, especially if you have an oddly shaped lawn.

We’ve got two large chunks of grass connected by a narrow corridor, and Robomow had some trouble getting from one zone to the next. At first it seemed a fatal flaw, but after returning to the manual for guidance, we realized that this problem is easily remedied with Robomow’s “Zones” function. This setting lets you designate separate areas the bot should cover, so not only is it great for directing the bot when it’s having trouble, it’s also the best way to get Robomow over a walkway or a fence separating two areas of your yard.

One of the biggest concerns we had when we first took Robomow out of the box was how well it could withstand the elements. Since it’s an outdoor robot (and one that doesn’t come with a roof to live under), we weren’t sure it could handle the torrential downpours that the Northwest is notorious for. Robomow proved us wrong. Even after a week of sitting unprotected through multiple heavy rainstorms, this bad boy started right up and kept mowing as soon as the rain subsided. It was like nothing had ever happened. Things like rain, mud, dust, and pollen don’t even faze this bot, so we give it big points for hardiness.

After putting this robot through the ringer for well over a month, we’re absolutely blown away by how well Robomow performed. Based on the videos we had seen prior to testing it ourselves, we thought it was designed for flat, even lawns devoid of any major obstacles. Boy were we wrong. No matter what kind of horrible, jungle-like ecosystem we put it through, the RS 630 took it in stride, and handled itself like a top-of-the-line robotic lawnmower should.

If you’re willing to invest some money, and don’t mind setting aside an afternoon to set it up, this hardy little robot will ensure that you never have to trim your grass manually ever again.

Smart kitchens do everything but cook, and now Samsung will even help with that