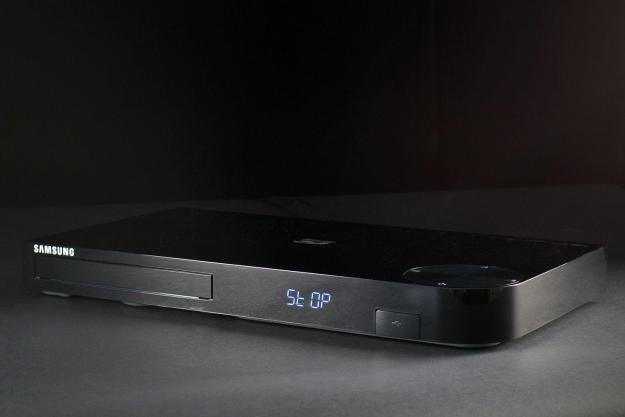 Chances are, if you’re looking for a Blu-ray player these days, you’re eying one that will do more than just play Blu-ray discs. That means serving up all of your favorite online streaming content, blasting out some decent audio, and most important, doing all of those things in an intuitive manner. Samsung’s latest flagship, the BD-H6500, takes on all of those tasks with bravado.

While it has fewer apps than streamers like Roku, and to a lesser extent, the Apple TV, it holds its own. And its smooth interface lends any display a nice slice of smart TV functionality, for under $200. Oh yeah, did we mention it plays 3D Blu-rays, and upscales to 4K, too? If you’re looking for a single tool to handle the bulk of your media burden, follow us below to see why the BD-H6500 might be one of the best choices around.

The BD-H6500 is by no means a top-tier Blu-ray player — if you don’t believe us, do some shopping on Oppo’s website, where you’ll find devices that go past the $1,000 mark. As such, the unboxing experience is decidedly vanilla. But that doesn’t stop this glossy little unit from looking sexy as hell when you get it out of its cardboard compartment.

Layers of glossy plastic give it a sleek look, interrupted only by a circular control panel up top. The right edge picks up its curved profile and sweeps back with it, rounding it off in a distinct way. Sexy or not, the device did feel a shade light as we set it on the TV stand, letting us know it likely isn’t packed with a heavy dose of premium components.

The box includes a slim quick-start guide, a pack of batteries, and a backlit remote with all the controls you’ll need to navigate.

In design, the H6500 sticks close to past models like the BD-F5900, and the lauded BD-F6500 — when you’ve got a good thing going, you may as well stick with it. A prominent digital display on the face shows basic operations, and a timer for discs and media streaming. There’s also a tight disc tray, and a USB port for plugging in media.

The back of the device offers a digital optical audio output, an Ethernet port, and a single HDMI output, which does not include ARC (Audio Return Channel). That hampers its ability to speak with some devices over the common language, CEC (Consumer Electronics Control) but it speaks just fine with Samsung’s version, called Anynet+. Keeping things in the family is a common theme you’ll find throughout our review, or with any Samsung product, really. Still the remote is programmable for basic TV functions including power, source, and volume, and as we may have guessed, worked automatically with our Samsung PNF5500.

The unit is layered in sleek, glossy plastic, with a prominent circular control panel in midnight blue along the top.

The remote has an intuitive layout, from the crossbar navigation at the very bottom, to the less-employed power and number keys towards the top. Also at the bottom are return and exit keys, the backlight button and the search key, the latter of which is harder to find than we would have liked. At the center is a large Home key to get to the main screen, and other basic disc navigation controls like play, pause, and search. Although the orange backlight looks a little old school, it’s a greatly appreciated addition.

The H6500 is loaded with features, including Wi-Fi connection, as well as the aforementioned 3D and 4K/UHD video upscaling. The unit includes DLNA, which will allow you to access media you’ve got stored on your computer or NAS server, and it will also allow for screen mirroring of select Android mobile phones and tablets to your TV, including (obviously) Samsung’s Galaxy devices.

Sticking with the theme of keeping it in the family, the H6500 is also specially designed to work with Samsung’s new multi-room audio Shape speakers, like the M7 and M5. If you own some, the player can connect to them wirelessly, allowing you to play movies, CDs and other media with zero latency over your Wi-Fi network.

As for compatibility, the player works with most basic surround sound codecs, including Dolby TrueHD, Dolby Digital, and DTS-Master Audio. It also works with a wide swath of audio and video files, and can handle sample rates up to 96kHz.

Deeper control settings include audio tools like sync control, Dynamic Range to help tailor volume compression, and controls for downmixing multi-channel audio to stereo. There are also deeper video settings like HDMI color control, frame rate control to convert DVD playback to 24 frames per second, and even a picture mode similar to what you’ll find on your TV, with options like Standard, Movie, and User.

In keeping things intuitive, most of the options are automatically optimized, and the average user won’t need to spend time wading through them to get good performance. The system is easy to set up and get on Wi-Fi, and from there, it just works.

Owners of Samsung’s smart TVs will find the H6500’s interface familiar. The pared-down Home page has icons for discs, movies and TV (which mostly served up content from Vudu in our searches), media, and apps.

The bottom row of apps includes three “Recommended” apps that stay put, including Netflix, YouTube, and Amazon Instant, as well as three apps of your choosing. It’s nice to have all of your favorite stuff on the main page, so we moved Hulu+ there. For some reason, however, you can’t move apps labeled as Recommended – a strange quirk which means Pandora, Facebook, and others stayed off our Home screen. We spoke with Samsung about it, and they said a firmware update to resolve that issue is in the works.

We could go on for a long while about the extensive app selection – some you’re likely to find quite useful, and others not so much, depending on what you’re into. Apart from those already mentioned, there’s a long list regulars like Twitter, Vudu, and Crackle, as well as some further outliers like Amazon Cloud, AccuWeather, and Fandango. Of course, the ever-present Web browser you won’t be using, powered by Microsoft’s Bing. A host of fringe apps include a UFC app, an exercise app that will teach you yoga lessons, and more. Signing in with a Samsung account will get you even more access, and you’ll also need to do so to purchase certain products like paid apps and movies. One notable omission? HBO GO. But we’ve yet to find a Blu-ray player that does host it.

When it comes to basic operation, the H6500 runs like a top. Throughout our evaluation, startup was snappy, discs loaded quickly, and it was easy to move in and out of different mediums. We were also able to do things like skip scenes, and search about as rapidly as we desired – something that can be tough to find from a lot of players that float around this price point. Perhaps most importantly, as mentioned before, we just really like the UI – it’s succinct, easy to use, and it looks good.

When it comes to basic operation, the H6500 runs like a top.

Apps loaded pretty swiftly, apart from a couple of hiccups when the player froze once loading Netflix, and also gave us an error with Pandora a few times. To get a feel for the overall speed, we conducted a Netflix launching race against our PN5500 TV.

Over four back-to-back time trials, the H6500 ended up just a hair slower, averaging about a half second behind. And it completely destroyed our poor old Sony BDP-S590 when we added it into the fold, loading in as little as a third of the time.

Audio sounded excellent, overall, letting the best moments from our Blu-ray collection shine through from selections like the brilliantly mixed Skyfall, as well as The Dark Knight Rises. Dynamic moments seemed to be better under control than on other players we’ve tested, music sounded full, and dialogue was soft and detailed.

While many users may think 1080p will look the same from all players, the H6500 is good proof that, even on the affordable rung, that simply isn’t true. Turning to the visual spectacle of our favorite Blu-rays left us utterly impressed. Our recently acquired copy of Raiders of the Lost Ark was nothing short of gorgeous, looking clean and smooth, with plenty of highlights. Favorite moments included the absolutely beaming gold sunset behind velvety profiles as the diggers worked to find the Ark in Cairo, as well as the supernatural storm that comes in over the horizon when the Ark is opened.

Returning to the more sharply rendered finale to Christopher Nolan’s Batman series, the vivid colors were engaging from start to finish. Simple moments like the blue CIA plane cut against the rocky, moss-green peaks at the intro scene were strikingly clean and beautiful, and night scenes offered deep, dark tapestries along the buildings, while the lights strewn along the bridges sparkled like well-cut gemstones.

We had a similar experience with Skyfall. The shots of Shanghai at night looked spectacular, culminating with the impossibly blue infinity pool atop Bond’s hotel. The picture was sharp, and the colors were splashy, without looking oversaturated in the more subtle moments – a difficult trick. We found ourselves deeply engaged with the multiple colors of Bond’s meeting with Q at the museum, as well. The scene seemed to perfectly blend accurate flesh tones with the richly drawn golden picture frames, and green marbled walls. Truly, the H6500 made our entire collection look better than several other players we’ve seen at this price.

The player did a fine job with our 3D copy of Prometheus, but we’re honestly just not real fans of Samsung’s active-shutter technology, so there’s always a bit of an issue for us when we watch 3D on our Samsung screen at home.

Thanks to a speedy, intuitive UI, loads of features, and gorgeous video performance, Samsung’s BD-H6500 deserves a spot below your TV. While the player had a couple of stutters in our testing, and we wished the layout of the apps was more adaptable, we really can’t think of much else to complain about. Those looking for an excellent-performing, one-stop shop for all of their media needs should consider the BD-H6500 a prime choice.