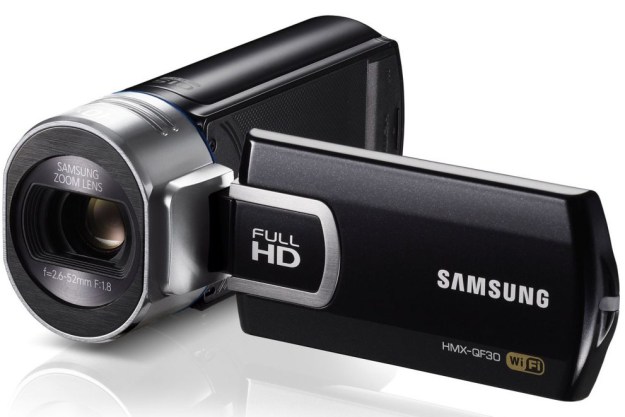 “The QF30 is for those looking for an affordable solution and who are willing to overlook some quirks and average video quality, but keep your expectations low”

Compact budget camcorders have come a long way. They all now shoot Full HD and come with optical image stabilization. With the HMX-QF30, Samsung even adds Wi-Fi for wireless connectivity and a touchscreen LCD. The QF30 is for those looking for an affordable solution and who are willing to overlook some quirks and average video quality, but keep your expectations low.

At $280 the QF30 is essentially a budget camcorder. A low price usually comes with low expectations, but Samsung has packed a few midrange features like a 20x optical lens and optical image stabilization. The camcorder has a 5-megapixel back-illuminated CMOS sensor (albeit 1.75MP effective pixels) that’s designed for improved low-light performance, although it’s a small sensor.

If your concept of a camcorder is something cumbersome, you’ve been stuck in time. The QF30, while by no means pocketable, is relatively compact and easy to hold in your hand. When you pick it up you’ll notice right away how lightweight it is (roughly 6 ounces). Construction wise the plastic feels a bit on the cheap side; it’s a budget cam, what can we expect. The camera can be held right- or left-handed, and it can do vertical recording.

The 2.7-inch LCD has a resistive touchscreen with a menu system designed to mimic that of a smartphone. You can swipe between screens and press on an icon to enter that function. But don’t expect the same kind of responsive experience. Because it’s a resistive display, you really have to use the tip of your fingernail since lightly pressing on it will get you nowhere; the same goes for sliding between screens. We had a difficult time using it, and it was oftentimes not as responsive as it should be. Rated at 230k dots, the display isn’t very bright, and can be hard to use under bright sunlight. Plus, when icons appear onscreen while you’re shooting, it’s difficult to see what it is that you’re recording. When the display is open, there’s a balancing issue as the camera tilts to the left, so you can’t put it on a table. If you want to do that, you’ll have to close the display with the screen facing the outside – a minor inconvenience.

You can shoot video in a few modes. Smart Auto is a full-auto mode where the camera takes care of the settings. A manual mode lets you adjust settings for things like white balance, exposure value, and focusing, but don’t expect total manual control. There’s also an Art Film mode for adding filter effects and an Art Time Lapse mode for shooting time-lapse video. (You can take photos in Smart Auto, manual, and Art Film modes) For video, you can shoot H.264 (MPEG-4 AVC) videos

Samsung is putting Wi-Fi into many of its products, from low-end to high. With the QF30’s Wi-Fi you can backup your videos and stills to a computer, but you can also transfer them to an iOS or Android smart device running Samsung’s MobileLink app; upload directly to YouTube, Facebook, and Picasa; or conduct a live broadcast via Ustream as you’re recording.

For a budget camcorder, we kept our expectations low, so we weren’t overly surprised by the performance.

The design of this camcorder is clean and simple, with few physical buttons to have to figure out. On the front is the lens with a switch on the side to open and close the lens cover. On the back are buttons for zoom, record start/stop, and My Clip (which lets you tag a moment while shooting and can be extracted later); a small cover peels back to reveal the DC-in jack to connect the power adapter. The bottom of the camera is where you’ll find battery and memory card slots behind the compartment door, and the tripod receptacle. At the top is the built-in microphone.

Along one side of the camcorder is a strap/grip to secure the camera to your hand. On the other side is the touchscreen LCD panel that flips out and swivels; next to the LCD is a home button that takes you back to the main menu screen. With the LCD opened you’ll see a small speaker and jacks for audio/video, HDMI, and micro USB (behind a cover). There’s no hot shoe or a way to connect accessories.

The QF30 supports the SD, SDHC, and SDXC (up to 64GB, which is approximately 497 minutes of recording time in Full HD 1080/60i) formats, however, Samsung recommends a Class 6 memory card or higher, which is what we used for testing.

The QF30 comes with a removable battery (charged in-camera), AC power adapter, USB cable, audio/video cable, and a quick start guide. Although the QF30 has a micro HDMI port for connecting to high-resolution displays, you’ll need to supply your own cable or adapter. The camcorder can be charged either with the AC power adapter (i.e., wall outlet) or via USB.

Turning on and off the camera simply requires flipping the LCD panel open and close; if the screen is already open, simply press and hold the home button. The problem you’ll notice right away is that the QF30 takes a bit of time to power up and down, which is a potential issue if you’re trying to capture those moments that pass by too easily if you aren’t quick enough. If you’re shooting constantly, make sure you enable the standby feature that allows for instant-on operation when you open the LCD; this mode essentially leaves the camera on even when you close the LCD, but it powers down automatically after 5 minutes of inactivity. One little annoying thing is you also have to manually open the lens cover, and usually forget to close it after use.

The typical user of this camera will shoot in the Smart Auto mode. The manual mode is nice to have when you want to play with the white balance and exposure compensation, but because the touchscreen display is so unresponsive it can be frustrating to drill through the various menu options. Unless we really needed to make those adjustments, we stuck with auto. Using the camera is fairly straightforward and easy.

With the camera strapped on your hand, zooming in and out and hitting the record button is easily reachable by thumb; you can also zoom by pressing on the LCD, but you don’t need to. Because the power adapter plugs into the DC-in port that sits above the rear controls, it can be annoying if you’re shooting with a cable in the way. Another quirk we found is that the video record button isn’t very responsive when we want to stop shooting.

As for performance, the video quality isn’t exceptional when viewed on a 46-inch HDTV and 27-inch computer display, but we somewhat expected that. The optical image stabilization isn’t as strong as we would like, and many of the videos we shot were jittery despite with the OIS on. Videos don’t look silky smooth when panning, and there are a lot of compression artifacts and lost details, despite shooting in Full HD. Colors look a bit faded, edges are jaggy, and it just doesn’t look as bright and sharp as we would like from a dedicated camcorder (in fact, we liked the video quality from our iPhone a bit better). The biggest issue is autofocus. We found that the QF30 had a hard time focusing, even before we start recording; it would also stumble when zooming and panning. Coupled with a slow lens, you need to move very slowly and try to avoid the zoom. The QF30 can’t handle low light shooting well, despite the back-illuminated CMOS, resulting in noisy video. And forget about taking photos: Stills come out very noisy even under the best light, and it likes to over brighten the image. If you plan to upload videos to the Web and view them in smaller sizes, they’ll look OK. The ideal usage for the QF30, in our eyes, is in a situation where the camcorder is on a tripod and there’s very little zooming and panning involved – great for starting up your own TV network on Ustream (what you do on your own network is none of our business).

The Wi-Fi functionalities are relatively easy to use in concept. We had no problems connecting it to our iPhone, but there are a few steps involved to get the two devices paired. Once connected we could view content and save them on the phone. But there are stability issues. The Samsung MobileLink app oftentimes would have issues keeping the connection (if you go out of it, you’ll have to close the app completely and restart it again; sometime we would have to reestablish the Wi-Fi connection before the devices would talk to each other). If there’s any interruption to the app, the connection will drop. Then, strangely, after a while, the app would no longer display any of the camcorder’s content; even though there’s plenty of videos and photos in the camcorder, the app would say there’s none. We tried reinstalling the app several times and turning on and off the phone, but we were never able to view any content. (We also discovered that you can only transfer and view videos recorded in the Web/HD resolution on the smartphone.) We had better luck uploading some samples directly to YouTube and Facebook, but the issue we encountered here was logging into our accounts with the touchscreen. It’s tedious because it’s slow (exacerbated by the unresponsive touchscreen) and it’s through a 3×4 keypad (similar to typing a text message on an old cell phone), not a virtual QWERTY keyboard. (You’ll also face this issue when you have to enter a password for a secured Wi-Fi network.)

For a budget camcorder, we kept our expectations low, so we weren’t overly surprised by the performance. What did surprise us was how mediocre it performed against our iPhone. Sure, you can enable optical zoom with image stabilization, but that’s a plus only if it works well. We did expect a better Wi-Fi experience, however, since we tend to like what Samsung does with wireless connectivity in its digital cameras, but the experience here was underwhelming (we do like that you can upload directly to YouTube and Facebook, provided that you can punch in your login information correctly the first time). If you can spend more, there are definitely better options.

Topics
Could the Huawei MateStation X dethrone Apple’s iMac?
UFC PPV: How much is Oliveira vs. Makhachev?
Apple has a bunch of new products coming, but not this year
Logitech’s new webcams are an alternative to Apple Desk View
AMD quietly slashes the prices of some of its best CPUs
A keyboard with its own CPU and GPU? Yes, it’s real — and it’s coming soon
The dream isn’t over — AMD’s RX 7900 XTX may still hit 3GHz
Great, now even the RTX 4090 power connectors are starting to melt
Best Samsung Galaxy Note 20 deals for November 2022
Nvidia’s RTX 4080 may be up to 45% slower than the RTX 4090, but it’s still pricey
We’re lovin’ this official McDonald’s gaming chair — the McCrispy Ultimate
Scientists find a surprising answer to the future of computers — paper
The Framework laptop is officially Thunderbolt 4 certified