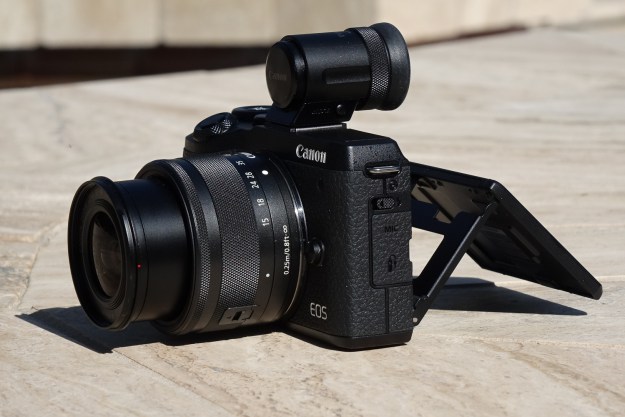 “The M6 Mark II has the highest-resolution sensor of any APS-C mirrorless camera -- but that's not enough to save it.”

Looking for the most resolution without going to full frame? The new Canon EOS M6 Mark II might be your best bet. With 32.5 megapixels, its sensor has almost a third more pixels than the much more common 24MP and 26MP APS-C sensors from Sony and Fujifilm. It’s the first big leap in resolution for crop-sensor cameras in several generations, but that doesn’t necessarily make it a worthy investment.

Megapixels alone aren’t enough to sell a camera these days, and unfortunately the $850 M6 Mark II falls short in other areas. Given stiff competition from more established systems, it’s a hard sell.

The Canon EOS M6 Mark II is a very compact and lightweight mirrorless camera, looking much like the company’s G Series point-and-shoots. It measures 4.7 x 2.8 x 1.9 inches and weighs 14.4 ounces without a lens It uses the EF-M mount, and there are still only eight native EF-M lenses from Canon. Fortunately, there’s an adaptor available that lets you attach the zillions of EF lenses floating around built for Canon’s DSLRs, but that won’t help the M6 Mark II stick to its compact nature.

The M6 Mark II looks like most other competitive mirrorless cameras. It’s boring but that’s all right as it has a simple layout and a decent grip. There is one thing that really stands out, and that’s the lack of a built-in viewfinder. Without it, you’re limited to the articulating 3-inch LCD monitor to both frame and review your shots. Since the LCD is a so-so screen with just over 1 million pixels — and tends to wash out in bright sunshine — this is far from ideal.

Fortunately, the kit we tested came with the optional EVF-DC2 electronic viewfinder that slips into the hot shoe. This 2.36-million-dot EVF isn’t the best, but it’s certainly helpful on bright day and gives the camera a retro look and feel. It also costs $200, which pushes the total price of the camera to over $1,000 without a lens, making it more than the Fujifilm X-T30, one of the best mirrorless cameras you can buy.

Even so, we would urge anyone considering this rig to buy it with the EVF. We might also urge you to avoid the standard 15-45mm kit lens, however, which is compact and lightweight but doesn’t take the best pictures.

For a small camera, there’s a good amount of buttons and dials to quickly access different controls. The movie record button, however, is too convenient — meaning you can accidentally hit and start recording a video when you don’t mean to. This happened to us many times before we realized the issue and became decidedly more careful as to how we handled the camera. Still, it’s a step above Sony’s competing mirrorless models that put the record button awkwardly on the side of the thumb grip.

USB, HDMI, and microphone ports are all included, but notably absent is a headphone jack.

The headline feature for the M6 Mark II is the 32.5MP APS-C sensor, up from 24.2MP for the older M6. The sensor is paired with a new Digic 8 processor, which improves burst rate to 14 frames per second, despite the increased pixel count. That’s double the rate of the older M6. Video has also jumped from Full HD to 4K. If these specs sound familiar, that’s because they’re the same as the new Canon EOS 90D DSLR.

One thing that’s definitely not the same as the 90D is the battery life. Rated for just 305 shots, the M6 Mark II falls well short of its DSLR counterpart, but is pretty standard for an entry-level mirrorless camera.

While we always look forward to more megapixels, you don’t have to leap to the 61MP full-frame Sony A7R IV for quality images. Lower resolution APS-C sensors are more than good enough for the vast majority of photographers, and the extra bit of resolution the M6 Mark II offers over the original M6 comes in handy if you need to crop.

But as we stated upfront, resolution isn’t everything, especially nowadays when so many of our photos are consumed solely via Instagram and its 1,080-pixel resolution. Fortunately, the sensor isn’t the only new thing in the Mark II. It also has an improved Dual Pixel CMOS autofocus system with Eye AF, a feature found on almost every new camera. We’ve raved about it in our Sony reviews and it works well here, too, but not as good as Sony’s more advanced system. We were able to test the Canon M6 Mark II alongside the Sony A6100 in a dark interior scene, where the Sony achieved sharper results of the same subject using Eye AF.

Another new feature is the 14 fps framerate. It’s a major selling point of the M6 Mark II, and as such Canon took us to the Road Atlanta Motor Sport Center to test it out (we were guests of Canon, but all opinion is our own). There we had the opportunity to photograph sports cars zooming around the track as well as more static, human subjects. We used the native 18-150mm f/3.5-6.3 zoom and the very cool 32mm f/1.4 prime. We loved this little lens as it makes for a fun walking around camera with good depth of field control; it’s the only real portrait lens Canon makes for the EOS M system.

Typical for Canon, the M6 Mark II has a menu system that’s slam-dunk easy to use and a responsive touchscreen. Everything is geared toward novices who may not understand camera terminology; if you turn the mode dial to Tv (Time value, more commonly called shutter priority) the camera will show examples of what slow and fast shutter speeds do. Other exposures modes are illustrated likewise, making the advanced controls more approachable to new photographers.

Unfortunately, when it actually comes to producing good images, the Mark II is a disappointment — especially with the kit lens. Although it worked well in bright sunshine, dim interiors were its downfall. However, the results we got with the 32mm f/1.4 were much better thanks to its wider aperture.

After the racetrack, we took the Mark II and kit lens to an indoor rodeo; a challenging situation for any camera. Due to the f/6.3 maximum aperture of the kit lens, we had had to crank the ISO to 25,600 to hit a shutter speed fast enough to freeze motion. For the record, the ISO range is 100 to 51,200, but the noise will prevent you from wanting to go that high.

This sensor coupled with the kit lens is too starved of light to make clean results. Our standard test confirmed the Mark II isn’t in the same ballpark as competing models like the Sony A6100. As we said up front, there’s more to any camera than megapixels, and low light performance is often more important.

On a more positive note, the 4K/30p videos look good. We’ve always liked the Dual Pixel CMOS autofocus system and it did a good job tracking fast-moving subjects such as horses racing on an indoor track. This isn’t billed as a video camera, but it will do a decent job for vlogging and home movies.

This is not one of Canon’s best efforts, although its shortcomings can be overcome with the right lens. Sadly, Canon has a dearth of wide-aperture lenses for the EF-M mount, but the 32mm f/1.4 that we loved is at least affordable at $479.

EOS M is hardly new, but it remains an immature system that fails to live up to the standard set by the likes of Sony and Fujifilm, which have far more lenses and offer built-in EVFs in models at similar prices to the M6 Mark II. We are puzzled as to why Canon offers two mirrorless systems based on different mounts (EF-M and RF), compared to Sony which uses the same mount for its APS-C and full-frame models. Canon’s newer R series is definitely its favorite child, and EOS M just doesn’t seem like a wise investment at this time.

Are There Better Alternatives?

Yes. The Sony A6100 ($750, body only) has a built-in viewfinder and state-of-the-art autofocus and subject tracking. It’s “only” 24MP, but its images are quite good. There are also over 50 E-mount lenses available, and Sony also makes full-frame cameras that use the same mount, meaning you have an easy upgrade path should you want it.

The $900 body-only Fujifilm X-T30 is 26MP, also has excellent image quality, a built-in EVF, excellent video specifications, and a cool retro design. There are also close to 30 XF-mount lenses available, including many primes with wide apertures for good low light performance.

How Long Will It Last?

The original M6 was on the market for over two years, so a Mark III won’t arrive anytime soon. This camera isn’t built for professionals, but we’ve always been pleased with Canon’s build quality and the M6 Mark II should easily give you many years of use.

Should You Buy It?

No. The M6 Mark II is an entry-level mirrorless camera with leading-level resolution, but is otherwise behind the times. The system as a whole is also lacking lenses, and Canon seems to be more focused on its R series of full-frame mirrorless cameras.

GoPro takes to the skies with the Hero10 Black Bones