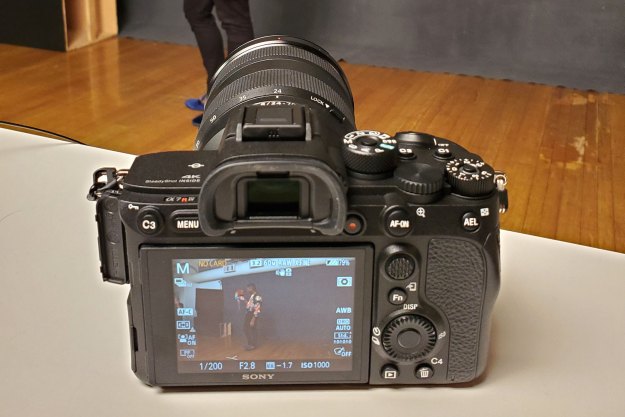 “Not everyone needs 61MP, but you'll still want the A7R IV for its speed, autofocus, and durability.”

Want a great deal on the Sony A7R IV, or another digital camera, this holiday? Check out our favorite Black Friday camera deals.

The Sony A7R IV is a 61-megapixel full-frame mirrorless camera.

That statement is pretty incredible when you recall people jumped up-and-down over the 42MP A7R II just a few years ago. Yet here we are in 2019 and the numbers keep soaring into the stratosphere. Not that we’re complaining, mind you — especially since we got a chance to see what that resolution really means capturing a variety of subjects at the A7R IV launch event in New York City.

Let’s set the table first. The new A7R IV arrives in September for $3,500. The samples we used were production-ready in terms of image quality, but the bodies and the attendant circuitry were a little squirrelly and likely to be updated before the cameras hit store shelves.

Not that this impacted our shooting very much, but it does mean this is our initial hands-on impression and not a final review. The goods news is, we can talk as much as we want about the image quality and what a 61MP sensor can do.

The best digital cameras
If you're ready to move beyond your smartphone, reach for one of these powerful, versatile dedicated cameras.
By Daven Mathies

To be honest, not everyone needs so much resolution — in fact, most people don’t. We’ve been quite pleased with the 24MP images from the Sony A7 III and other cameras with similar sensors. 61MP comes out to 9,504 x 6,336 pixels, or enough resolution to make a 31 x 21-inch print at 300 pixels per inch. For another perspective, 8K TV, still a nascent technology, is “only” 7,680 x 4,320 pixels, or about 33MP. If super-large prints or extensive cropping are in your plans, then the A7R IV probably looks very attractive. But for viewing images online, especially on the likes of Instagram, it’s beyond overkill.

There’s been a lot of buzz in the photo world with the introduction of medium format cameras like the $10,000 Fujifilm GFX 100, with a 100MP sensor. Clearly targeted to studio professionals, it’s hard to knock such cameras, but the rest of us don’t have that kind of money, or simply don’t want a camera that big and bulky. 61MP may sound like a lot less than 100, but in any practical sense, it really isn’t. You can still shoot all the same subjects, and there are very few delivery methods where the difference would be noticeable at all.

What’s more, the A7R IV delivers a claimed 15 stops of dynamic range for “breathtaking realism,” according to Sony, which puts it well within — and potentially even above — medium format territory. Typically, we take this kind of hype with several grains of salt, but the images we captured were really fine.

And on the off chance 61MP isn’t enough resolution for you, the Mark IV has a 16-image pixel-shift mode that outputs a 240MP file, easily surpassing the 180MP eight-image mode of the Panasonic Lumix S1R. The sensor shifts slightly between each exposure, then the 16 resulting images are stitched together to form one ultra-resolution photo. The camera must be on a tripod and the subject perfectly still (so, portraits are out), but that’s an incredible amount of detail. Using a remote shutter or a shutter delay is also recommended.

Unlike the Lumix S1R, however, that stitching can only be done in Sony’s Imaging Edge desktop software — there is no way to preview a pixel-shift file in-camera. Clearly for still life and landscape photography (on a windless day), this offers even more resolution for pixel peepers. We did not have the opportunity to use this feature due to the frenetic nature of the shooting schedule during the unveiling, but we’re definitely anxious to try it out when a production sample arrives.

We’ve used practically every Sony Alpha interchangeable lens camera that’s been released, going back to the initial A-mount introduction 10 years ago as well as most E-mount models. The biggest change in that time is how the E-mount (used on all Sony mirrorless cameras) has grown to dominate the mirrorless sector, with 52 Sony lenses available and a whole lot more from third parties.

Sony set the bar for full-frame mirrorless and continues to lead the way, and not just with resolution. Sony cameras have a good feel, nice balance, and logical placement of key controls, and the A7R IV improves on this with a deeper grip, improved moisture and dust resistance, a lock button on the exposure compensation dial, a textured autofocus joystick, and a few other minor enhancements. We have some issues, like the movie record button being too close to the AF-On button, but for the most part the layout is very straightforward and — dare we say — DSLR-like, although certainly not as bulky as the Lumix S1R. The battery is also potent, rated for 670 shots when using the LCD, based on CIPA testing.

The LCD looks to be the same as on the Mark III, with 1.44 million pixels and measuring 3 inches, but the 5.76-million dot OLED electronic viewfinder is all new, with selectable refresh rates of 100 or 120 fps. We’ve seen this viewfinder previously on the Lumix S1 series and it is absolutely gorgeous.

We have complained about Sony’s menu system for years and the company finally appears to be listening. With the Mark IV you no longer have to go into the menu system to enable Eye AF, as it is on by default. There are other tweaks, such as the ability to customize the function options for stills and videos, but you’ll still need to delve into the menus to make the most of this camera — but at least Sony is trying.

Thanks to the new Bionz X processor, the A7R IV keeps the same continuous shooting rate as the lower-resolution Mark III: 10 frames per second. The buffer holds up to 68 Extra Fine JPEGs. As expected, there is some lag as the files load to the card, but it’s still reasonably fast considering just how much data is being processed.

To keep up with that speed, the Mark IV also has the latest-generation autofocus system, with 567 phase-detection points and 425 contrast-detection points covering 74% of the image area. That’s not quite as good as the $4,500 A9, but it’s still very impressive. The Mark IV also gets the latest Real-Time Eye AF and Real-Time Tracking, features that use artificial intelligence to identify and track subjects. For the first time, Real-Time Eye AF is also available in movie mode. This all means more shots that are sharply in focus, but it’s not foolproof and you still have to use some skill for the best results. The same can be said for any camera, but the AF system in the A7R IV goes a long way helping you get more keepers than not.

We have raved about Eye AF ever since Sony introduced it several years ago, and they keep refining it. If portraits of people or pets are your thing, you really need to try out this new Real-Time system.

Obviously, the lens plays a big role in autofocus performance, too. Many of the shooting scenarios we were presented were static, where the 85mm was a winner, but others featured dancers twirling and leaping into the air, where it couldn’t keep up during high-speed bursts. The 85mm uses the older supersonic wave AF motor, versus the XD linear motor system of newer lenses such as the 135mm. When you’re working with 61 megapixels, even slight autofocus errors can show up.

As the camera was so new, RAW support wasn’t available, so we were stuck shooting Extra Fine JPEGs. We enhanced the contrast in the Creative Styles settings to meet our preferences, but the images presented here are straight out of the camera. While most pros will undoubtedly shoot RAW and edit in Lightroom or another desktop application, it’s worth pointing out that Sony makes enough tweaks available that you could probably dial in the look you’re going for in-camera.

The subjects Sony supplied for the event ranged from old Miami Vice-type vignettes to modern dancers and Vogue-like fashion scenarios. Parrots and dogs were thrown in to test the Animal Eye AF. We took hundreds of photos and the toughest task was simply examining them all. We were really, really impressed by Real-Time Eye AF and were taken aback at the detail when viewed from OLED viewfinder; they looked ever better on a 27-inch monitor. Colors were real-world accurate, and it felt like you could enlarge certain files to fill a wall without falling apart.

Aside from needing perfect focus, there is another “negative” about all that resolution, though — it can be really unforgiving. Every imperfection, from uneven makeup to blemishes, are there to see. We liken this to the early days of HDTV, when television makeup artists had to learn new techniques since the video resolution was so much better and every mistake was magnified. We guess these are good problems to have, all things considered, just know that you may need to spend a lot of time retouching these files if you want to present them at their maximum size.

A lot to look forward to

The Sony A7R IV should be an Avengers: Endgame-type blockbuster when it arrives this fall. It’s got the resolution, autofocus, speed, and form factor that should place it near the top ranks for Camera of the Year honors (of course, we have just shy of half a year left to go).

Until then, we’ll count the days until that happens — and hope other manufacturers step up their game by introducing cameras that can meet or beat the A7R IV. Good luck to them.

Netflix sheds light on its ‘approved cameras’ for filmmakers
Insta360’s next camera could be amazing for lowlight photography
The Insta360 Sphere is a virtual invisibility cloak for drones
Insta360 is about to reveal … exactly what?
Nikon’s new 800mm lens for Z-mount cameras lightens the load
ReelSteady makes GoPro Player ‘reel’ useful for filmmakers
GoPro takes to the skies with the Hero10 Black Bones
How to turn off the camera sound on an iPhone
24 amazing images of our planet for Earth Day
Instagram test lets you pin particular posts to your profile
Snapchat’s pocket-sized Pixy drone takes to the skies
DJI Mini 3 Pro unboxing video drops just ahead of launch
GoPro Hero 10 Black vs DJI Action 2 vs. Insta360 One RS: Clash of the action cameras