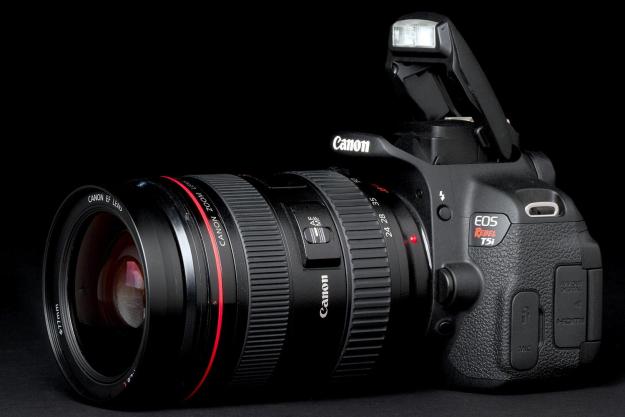 “Recommending the T5i for still photography is a no-brainer. It’s easy to use, takes quality images, and has enough technical headroom so you can spread your creative wings.”

Canon’s latest Rebel may not have the cutting-edge technology of the EOS 70D such as Dual Pixel AF video technology and Wi-Fi, but if you don’t want to spend well over a grand, this one covers all the photographic basics – and then some. Let’s see what this DSLR in Canon’s entry-level series can do right out of the box.

No need to spend a lot of time here – the 18-megapixel T5i ($849 with 18-55mm IS STM lens) looks like almost every “T” that’s come before it. This is your classic black DSLR festooned with keys and decals galore (see photos). Since this is a Rebel targeted to DSLR newbies and people looking to upgrade without going broke, the body isn’t as beefy as the recently-reviewed 70D. In fact it feels a lot more “plasticky” by comparison but you’re also saving $500 – serious money in any person’s reality. A body-only T5i costs $699 versus $1,199 for the 70D. The T5i measures 5.2 x 3.9 x 3.1 inches and weighs 20.5 ounces with battery and card. It has a good-sized grip with a nicely-textured finish to help keep it steady.

Canon’s been making cameras forever and they know what it takes to achieve quality results.

Let’s hit some of the Rebel’s key selling points. The camera features the Canon EF mount so you have over 100 lenses to choose from, a great thing for beginners and more advanced shutterbugs. It has a pop-up flash, stereo mics, and the nearby mode dial has 12 options ranging from Scene Intelligent Auto (smart auto) to manual. You can quickly move into movie mode by adjusting the power switch to video. This flips up the mirror inside, putting you immediately into Live View (on the LCD). Press the red dot button and recording begins. On the rear is an optical viewfinder with 95-percent coverage and a vari-angle 3-inch touchscreen LCD rated a nice 1,040K dots. The 9-point AF system is all cross-type so focusing is decent for the most part but it’s not nearly as advanced as the 70D or other enthusiast models. ISO hits 25,600 which matches most new cameras, and the T5i is quite responsive with a top burst speed of 5 frames per second. Realize this is a lower-cost DSLR so it doesn’t have the processing power of the big boys. You can only get six RAW files or 22 JPEGs before the camera pants for breath. This is hardly a deal breaker for the intended buyer. If you’re really serious about action or sports photography, you might consider the 70D since it has a faster burst rate (7 fps/65 JPEGs) and shutter speed (1/8000 vs. 1/4000).

All in all, the EOS Rebel T5i has a good feel, nicely positioned controls, and the added plus of a touchscreen LCD that lets you shoot in a wide variety of creative angles.

Different kits are available for the Rebel T5i but the basic one features the body and 18-55mm IS STM lens for $849. You might want to consider the 18-135mm IS STM edition for $1,049 or anything else that strikes your photographic fancy. You’ll also get the battery and plug-in charger. Here the power pack is rated 550 shots, which is good for a day’s shooting. You’ll also get a strap, USB cable, a huge 388-page printed instruction manual, and two discs. One is the EOS Digital Solutions Software (PC/Mac) for handling files, and also contains the manual as a PDF. A second disc is the EOS Digital Software instruction manual. Since the camera is geared toward less-sophisticated shooters there are also two basic guides to flash and macro photography.

We’ve reviewed and used Canon DSLRs for many years, so firing up the T5i was nearly effortless. Canon’s menu systems are very linear and simple to follow. We’d doubt anyone would have difficulty using this camera. If so the manual has quick-start guide to get you going. The T5i was set to maximum still resolution (5184 x 3456 pixels) and top video quality of 1080/30p. Canon ignited the DSLR videography revolution, but with the T5i it remains behind the curve when it comes to movies with many competitors offering 60i and 60p; hopefully this improves in 2014. The lens used for this review was the 55-250mm f/4-5.6 IS STM zoom which is specially designed to be quiet during video recording. Canon’s APS-C imaging sensors are a tad smaller than most so the digital factor is 1.6x rather than 1.5x, so our zoom equaled 88-400mm in 35mm terms.

We started off in Scene Intelligent Auto, then worked our way through the mode dial. Beyond this green auto setting – which we assume most Rebel shooters will use much of the time – the T5i offer PASM, Scene (three options), and individual settings for Sports, Macro, Landscape, and Portrait. You’ll also find flash-off and CA (Creative Auto) to change the tone of the images (vivid, monochrome, and so on) and blur the background (change the aperture). Once done we closely reviewed the images/movies on a 27-inch monitor.

Before getting into the speeds-and-feeds, we’ll note the Canon is fun to use but doesn’t feel nearly as substantial as the 70D, which is to be expected. The vari-angle LCD is extremely useful and its touch capability is an added plus for easily changing settings. Focusing – with the 9-point system – is OK but the camera can get fooled into focusing on the wrong spot when you’re in Auto. Canon, in its inimitable fashion, doesn’t place the AF Assist lamp on the body itself – you have to open the flash to make it work. Make sure a flashing red focus point is where you want it to be. By drilling into the camera a bit you can easily use Spot AF to zero in on your subject in PASM modes or just tap the screen in Live View to focus where you’d like. Spot AF and myriad other options are the reasons every owner of this camera should consider reading the manual. And you’ll be surprised how much you can do even with a DSLR designed for newbies and those trading up.

We used the T5i in various Arizona surrounds and found the images to be quite good, even as straight JPEGs. Canon’s been making cameras forever and they know what it takes to achieve quality results. Colors have a nice, realistic tone in the Standard setting but you can use Vivid if you like more pop. Other than a few missed focus points early on, there’s little to complain about on the still front.

Videos are somewhat of a mixed bag. Focusing in movie mode was enhanced for the T5i versus earlier editions, which is all well and good but it’s not nearly the quality of the 70D. Rather than the excellent Dual Pixel AF, here it’s hybrid AF, a combination of phase and contrast detect systems (it’s just contrast detect for stills). Although autofocusing is improved, there are still issues with rapidly moving subjects, yet slow panning of landscapes is quite good. Exposure has some issues as well since it couldn’t keep pace with a slow zoom. On a more positive note, colors were reasonably accurate, there was very little moiré and no instances of rolling shutter. Definitely an improvement but not as good as the 70D or Sony’s Translucent Mirror Technology found in even their most affordable DSLRs.

Most DSLRs hit the 25,600 ISO level so this is no big deal. What is important is the fact the T5i handles high sensitivity levels quite well. We barely saw any digital noise until ISO 1600 and then it began to creep in slowly as we raised it for our test subject. You can even get away with 25,600 for a small image. We don’t recommend it but this camera works well for anyone who likes to shoot with available light. Combine this body with a wide-aperture prime lens and you’ll open yourself to a nice, new world of non-flash photography.

Recommending the T5i for still photography is a no-brainer. It’s easy to use, takes quality images and has enough technical headroom so you can spread your creative wings if you care to. Movie quality is just OK, however; perhaps we’ve been spoiled by the 70D, which we had just finished testing before taking on the T5i. Focusing is still an issue for most DSLR video and the T5i is no exception, although there’s a definite improvement over other Rebels. If videos are very important, consider other options such as Canon’s 70D or Sony’s using Translucent Mirror Technology. Also the 9-point AF system isn’t robust enough to zero in on all intended subjects without a little work. Beyond these few issues, you really can’t go wrong with this camera.

GoPro Hero 11 Black leak suggests a moderate upgrade
The best iPhone tripods for 2022
Netflix sheds light on its ‘approved cameras’ for filmmakers
Insta360’s next camera could be amazing for lowlight photography
Nikon’s new 800mm lens for Z-mount cameras lightens the load
ReelSteady makes GoPro Player ‘reel’ useful for filmmakers
GoPro takes to the skies with the Hero10 Black Bones
How to turn off the camera sound on an iPhone
24 amazing images of our planet for Earth Day
Instagram test lets you pin particular posts to your profile
Snapchat’s pocket-sized Pixy drone takes to the skies
DJI Mini 3 Pro unboxing video drops just ahead of launch
GoPro Hero 10 Black vs DJI Action 2 vs. Insta360 One RS: Clash of the action cameras