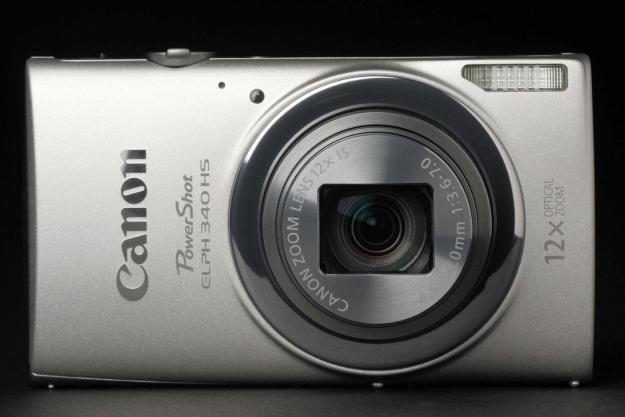 “Cameras like the ELPH 340 are a reason why smartphones are winning the compact point-and-shoot war – there just aren’t enough cool features.”

Take a good look at Canon’s PowerShot ELPH 340, because it may be the last time we will ever see such a compact point-and-shoot camera from Canon again. With few revolutionary features to speak of, it seems Canon has given up on this category entirely. It is already phasing out the A-series – traditionally its budget series, but the ELPH will take over – and it’s putting more emphasis on higher-end models. In fact, as you’ll read below, it also seems Canon has downgraded this new camera’s specs, making us wonder, why even bother when there are smartphone cameras that are just as good? But, let’s not get too ahead of ourselves on Canon’s business model, and focus instead on this unfortunately lackluster compact.

If you put the 340 next to its predecessor, the PowerShot ELPH 330, you would think it’s the same camera. In terms of design and form factor, the camera remains relatively unchanged, but the 340’s dimensions are slightly larger and weight is heavier. It still has that tapered design with rounded corners, and is easily pocketable, but not as lightweight and compact as the smaller ELPHs. If you have big hands, you may have trouble gripping onto the camera comfortably.

Despite it being the newest model, it feels a generation behind.

There are some minor cosmetic changes, if you look hard enough. For example, the AF assist lamp is further away from the flash, the button positions on the back have shifted (buttons are also not recessed, making them easier to press down), the mode switch has moved from the back to the top (with a new mode added for Creative Shot, which shoots a scene in multiple, artsy exposures), and a Mobile Device Connection button has been added to the back (a feature taken from the PowerShot N, which gives you one-touch access to an often-used wireless function). The 3-inch LCD is the same, rated at 461k dots (non-touch).

So, compared to the 330, the 340 has more resolution and a longer zoom, making it a stronger camera, right? Well, not exactly, and here’s why. The 340 actually uses an older image processor (Digic 4+) than the 330 (Digic 5), which explains why the newer camera has a smaller ISO range (100-3,200, versus 80-6,400 in the 330). Now, cameras like these tend not to do that well at high ISOs anyway, but we would have expected a newer camera to offer a similar or higher range than its predecessor. The 340’s lens, while longer, is a millimeter less wide that the 340’s. Battery life has also decreased from 220 shots (in normal mode) to 190. So, on paper at least, the 340 seems weaker in certain areas.

What you do get in the new camera are additional wireless connectivity features. The Wi-Fi is the same as in the previous model, letting you connect directly to another Wi-Fi-enabled PowerShot, a smartphone (iOS or Android), a computer or compatible printer on the same Wi-Fi network, or to the cloud via Canon’s Image Gateway service. For the most part the system works (and much improved), but Canon’s implementation is still more convoluted than Samsung or Sony’s, especially with setting up Canon Image Gateway (which we just can’t be bothered with). We had no issues pairing the camera with our iPhone 5S; once the two are connected directly via Wi-Fi, we could view and transfer photos from the camera to the phone (which we can use to upload to the Web), and operate the camera remotely – a much welcomed feature that was lacking in older Canon PowerShots with Wi-Fi. Remote viewing is very responsive (although there’s a slight delay when zooming), although on occasion we experienced some hiccups in the live stream. When paired, you can add location data to the photo by using your smartphone’s GPS.

Photos look fine in smaller sizes, but, overall, quality is a bit disappointing.

Another new feature is near-field communication, or NFC. It allows you to quickly pair the 340 with another NFC-enabled device, which, right now, are select Android smartphones (and some printers and TVs). NFC takes care of the “handshaking,” which means you don’t have to bother with going through settings manually. We tested the NFC with a Sony Xperia Z1S smartphone by tapping their respective NFC logos (on the left side of the camera, on the back of the smartphone). It worked like magic. Once contact is made, the phone searched for appropriate app on the Google Play store for installation. Once downloaded, a second tap opens the Canon CameraWindow app, but, unfortunately, the two devices had trouble finalizing the pairing. We’ve seen this process work effectively with other cameras, but it struggled here. We then manually connected the two instead, which worked.

As for video, the camera records Full HD 1080 at 30 frames per second, not the 60 fps that higher-end cameras are achieving. Like the 330, the 340 has the Hybrid Auto mode that records up to 4 seconds of 720p video each time you take a still, joining them to create a mini Vine-line video. Since this is mainly an automatic camera, there are plenty of creative and scene modes that adjust the settings based on the scene, such as nighttime handholding to time-lapse and toy camera.

The 340 comes with a battery, battery charger, wrist strap, and some documentation. There is no software CD or instructional booklet, but those can be found online at Canon’s website.

The 340 isn’t difficult to operate. While there’s a Program mode that lets you change some settings like the ISO, white balance, and exposure compensation, it’s purely an automatic point-and-shoot camera, and that’s mainly how we tested it. Unlike smartphones, you get the benefit of the optical zoom lens with image stabilization and the various creative and scene modes. For its intended user, it’s aim, shoot, and forget about it. The 340 retains the same user interface as the 330, which we still think is a bit convoluted to navigate through at times.

Like the 330, the autofocusing is responsive and locks onto objects and faces easily when using the camera in well-lit situations. You’ll notice it’ll struggle a bit in low-light conditions, taking extra time to grab onto something, but that’s to be expected. Low light isn’t its forte, as, even at ISO 400 in a room lit by a lamp, our photos look noisy and blurry, with dull details on the edges. Even at dusk, where there was still some light, our photos didn’t look as clear as we would have liked, exhibiting noise. If you’re into action shots, say your kids’ sports, you’ll be disappointed. The 340 isn’t fast enough; during our testing, it couldn’t get a still-enough shot of a fidgety cat, even when we used the burst shooting modes. This camera is best for still-life, with a lot of light.

Daytime photos fared better, but there’s still noticeable but even-level noise when viewed at 100 percent and colors were a bit muted, with edges washed out. There’s a creative mode for making the colors more vivid, but we thought the colors looked over-exaggerated. The photos all look fine if you’re sharing them at small sizes or even viewed on the Web, like they are here, but you may not be entirely happy if you want to enlarge any of them. This is a bit disappointing, in particular with our daytime photos, because Canon’s point-and-shoots are usually stronger than this. The MP4 movies look fine and relatively smooth, but the colors don’t seem as vivid and clear, and mono audio quality is so-so; it’s fine for capturing short clips to remember a particular moment.

Overall, the 340 feels slower than the 330, and we thought the 330’s image quality was better. We are entirely sure, but it could have something to do with the stronger image processor in the older model. We aren’t sure why Canon decided not to use the Digic 5, but it could have made a major difference.

Cameras like the 340 are a reason why smartphones are winning the compact point-and-shoot war. Despite the 340 having an optical zoom lens and other easy-to-use features, most new smartphones are just as good in terms of functionality and image quality, if not better in many cases. We are shocked and disappointed that image quality seems to have been downgraded, no thanks to lesser specs. Throwing in Wi-Fi and NFC really doesn’t solve the convenience factor that smartphones offer. If there were an argument for not carrying two devices, it would be this.

We know that there’s still an audience for compact cameras, even if there’s fewer and fewer of them. But at $199, we think there are better options, like Canon’s 330. Although it’s technically an older camera, we feel the 330 is far superior in performance. Sure, it lacks NFC, but NFC is not a must-have feature, nor do many devices support it; plus, for us, it didn’t even work as well, so we don’t think it’s something you’ll miss out on. And, at $179, you can use that extra cash saved, on a good memory card or camera case.