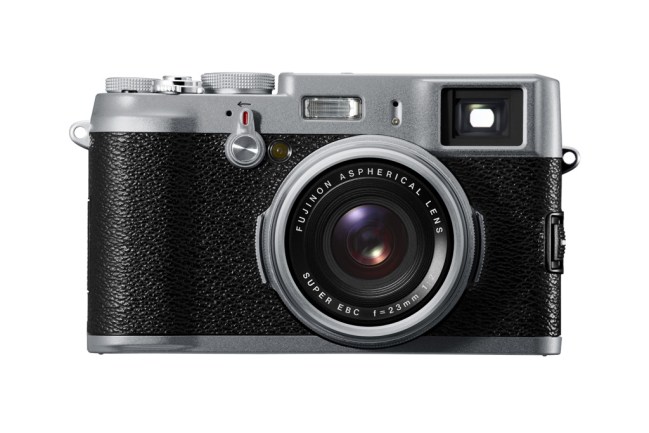 Fujifilm officially announced the FinePix X100 for US consumers today (we’ve been stuck waiting for it since September), after an immense amount of coverage up until this point surrounding the camera (we even had a chance to play around with it at CES earlier this year). Fuji describes the camera as inspired by advanced amateur and professional photographers, housed in a compact, vintage body.

We hesitate to call this a compact camera, but it is much smaller than a DSLR, more comparable to a Micro Four Thirds device. But it’s really the X100’s insides that matter: The camera features an APS-C CMOS 12.3-megapixel sensor and a 23mm single focal length fixed F2 lens. This large sensor and aperture allow photographers to easily adjust focus while shooting or recording in HD, and also capture high-quality images at low and high sensitivities. Extended ISO ranges from 100 to 12800, standard are 200 to 6400. Fujifilm’s new EXR Processor also helps the camera achieve higher quality than any previous FinePix device and aid in fast focusing.

The lens itself, in addition to the F2 aperture, is built with a 9-blade aperture diaphragm, which really just means that when working with a large aperture, photographers are can ably manipulate focus to create a bokeh effect easily and quickly.

Of course, it’s most-heralded and remarkable feature is its hybrid viewfinder, the world’s first. Aside from all the photo geek speak, this is simply a manual optical viewfinder (although a nice large, bright one) that can be changed to EVF mode with the flip of a switch. It’s sort of the camera’s most gimmicky feature, but does give photographers additional control over their shots. In keeping with the retro theme, the X100 also features manual dials and a faux leather chassis.

It also includes Monochrome Mode, a dedicated RAW button, a motion panorama mode, and a slew of additional settings for creative types.

Here comes the bomb: The X100 will be available in March and run you $1,199.95. That’s more than double the price of some very capable DSLRs, but it’s definitely a niche item that deserves to be marketed as a luxury cam – and about $800 less than Leica’s X1.

NASA highlights amazing images of ISS shot from the ground