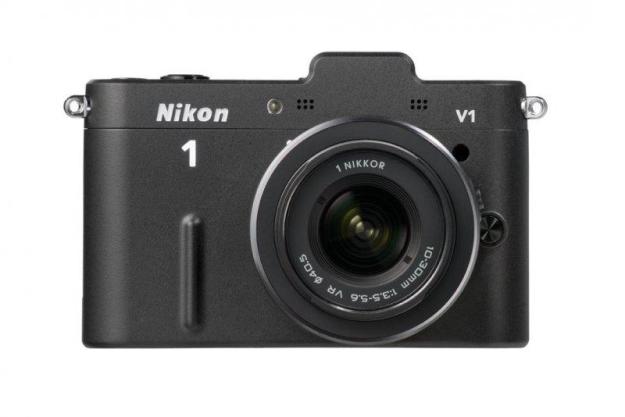 “We really have difficulty recommending the V1 as tested simply because it’s wildly expensive, and the results don’t measure up to the competition.”

We tested the 10-megapixel Nikon J1 awhile back and felt the company’s first Compact System (mirrorless) Camera was overpriced, especially compared to the 12MP Olympus E-PM1, which you can get for around $450 with a 14-42mm lens and flash. The J1 has since come down from its initial levels, but even at $600, it’s not worth it. Now, we finally received the dressed-in-black V1, which is geared to advanced photographers rather than the point-and-shoot J1 crowd.

That’s not to say the two cameras are radically different — their engines and basic feature set are the same — but the V1 has some spice that makes it more appealing such as a high-quality electronic viewfinder, a much better LCD screen, and a hot shoe for optional accessories such as the SB-N5 flash or a GPS unit. Actually the flash really isn’t optional since, if you don’t get it, forget flash photography. Where the J1 has a small built-in flash, the V1 just has the hot shoe. So let’s add $150 to the price — now we’re nearly at a grand. Nikon was kind enough to send the new VR 10-100mm power zoom to test, and that’s a cool $750.

The Nikon 1 V1 has a clean, sophisticated look (see photos). It’s much larger than the J1, measuring 4.4 x 3 x 1.7 (WHD, in inches) and tips the scales at 10.4 ounces (body only). The J1 is 4.2 x 2.4 x 1.2 and weighs 8.3 ounces, also body only. We like the V1’s understated looks and the logos pop nicely from the front. Here you also find an AF Assist lamp, stereo mics, and the Nikon 1 mount. Currently, there are four lenses available, so your options are a bit limited, but key focal ranges are covered. If you have some Nikon F mount DSLR lenses in your drawer, they should work with the V1 by using the FT-1 adaptor ($270). There are some limitations, however, depending on the lens, but still you can use your older glass.

On the top deck of the V1 is the hot shoe, the raised bump for the EVF, on/off, shutter, and red-dot movie buttons. As mentioned, the J1 has a built-in flash in place of the hot shoe, so definitely put the SB-N5 Speedlight on your shopping list. There are two critical differences on the back between the two Nikon 1s: the high-quality 1.44MP viewfinder, and a decidedly improved LCD screen (921K dots versus 460K). This is one of the better screens we’ve recently used, with rich contrast and colors that pop. We easily used it in bright sunshine after pumping up the brightness a bit. The rest of control/key layout is the same — for better and for worse. We weren’t fans of the four-option mode dial on the J1, and since there’s no difference here, we’re not thrilled with the V1.

In order to get into anything beyond Scene Auto Selector (intelligent auto), you have to use the menu system to get into PSAM (Program auto, Shutter/Aperture priority and full manual). The other three dial choices are Movie, Smart Photo Selector and Motion Snapshot. Smart Photo Selector is a decent option as it takes a series of shots and lets you save the best one, but it really slows the camera down. Motion Snapshot is one of those foolish features engineers feel is the next iPhone. When you’re in this mode, one second of video is shot along with a still. During playback, you see a combination of two in slow motion with a music soundtrack. Photo enthusiasts will really like this one! Yeah, right…

We squawked about the lack of user-available scene or art filters with the J1 — and our beef still stands here — but let’s not belabor that issue. Perhaps Nikon will make some changes when the V2 comes along, but who knows?

There’s another positive for the V1: battery life. The J1 is rated 230 shots, while the larger camera is a nice 350, so you’ll get in a full day’s shooting with this one.

The Nikon 1 V1 comes with the body and whichever lens kits you choose; the basic is a 10-30mm, which equates to 27-82mm in 35mm terms because of the camera’s 2.7x digital factor. You also get a quick start guide, a 76-page user’s manual, battery/charger, A/V-USB cables, and various caps. The full reference manual is on a CD-ROM, and on a separate disc are ViewNX 2 and Short Movie Creator.

Nikon sent us the SB-N5 flash, basic kit lens, a 10mm f/2.8 pancake lens, as well as the 10-100mm power zoom. Since we’ve used the smaller lenses before, you didn’t have to twist our arm too hard to snap the power zoom into position. With a Class 10 SDHC card and the flash snugly in place, it was time to put the V1 through its paces.

The Nikon V1 is quite imposing with the flash and power zoom. It also weighs 35 ounces — which is very DSLR-like. And we thought the whole idea of Compact System Cameras was to offer interchangeable lens capability, speedy response, a lightweight body and affordability. Oops! The rig we carried around cost close to $1,700. Not that we have anything against testing expensive gear. To set the record straight: we’re not ragging on Nikon alone for its exorbitant pricing. FujiFilm’s new CSC, the X-Pro1, is $1,700 body-only, and the lenses are $600 each. Whew!

Before we get into the results, let’s state the V1 has a rock-solid feel. The power zoom has a toggle switch on the left side, making it fairly easy to keep the rig stable as you zoom in on your subject. The EVF is excellent with very clear readouts. It automatically switches between the LCD and the viewfinder as you bring the camera toward your face. This is a very good, real-world feature. The LCD screen is also a winner with its accurate colors and ability to withstand direct sunlight.

The menu system is the same as the J1 — it’s linear and straightforward, with no pizzazz. It’s okay, but we expected more from Nikon. Then again, we’re not talking about Apple or Google, so we should cut them some slack.

The first inklings of spring hit the northeast, so it was time to head to the beach. We’re not members of the Polar Bear Club looking to take a frigid swim; we just like the architecture and landscapes of Jersey Shore beach towns.

It was a bright, sunny day, so the LCD got a good test, and it passed with flying colors. We walked on the beach, shooting classic buildings and signs, along with crashing waves and flying seagulls. For the most part, the camera was set to JPEG Fine in Program Auto, but we tried Smart Photo Selector, and some manual modes. The continuous mode is a nice 10 fps and we used that when the occasion fit. We must admit the VR 10-100mm power lens is a killer. It moves very smoothly and quickly through the focal range (27-270mm) via the side-mounted toggle switch. Another nice thing about the lens is its silent operation thanks to a voice coil motor. This is critical for video since you won’t hear the zoom motor noise on your soundtracks.

After our trip to the shore, and performing various tests, it was time to review the images on a PC, make prints and review the videos on a 50-inch plasma HDTV. Alas, for all the differences between the V1 and J1, the final results were the same. Photos were simply okay, without the pop we prefer. Now, you certainly won’t highlight them all and send them to the trash bin, but we really expect better — especially for a $1,000 camera. We really believe the heart of the problem is the CX-size sensor used in Nikon 1 cameras. It’s smaller than Micro Four Thirds used by Olympus and Panasonic. It’s tiny compared to APS-C imagers used in competing CSCs from Sony and Samsung. This means it’s handicapped right out of the gate. Picture quality simply doesn’t measure up to Olympus PENs and Sony NEX models. That’s not to say Nikon 1s are incapable of taking a good shot — they can given enough light either thanks to the sun or the very good Speedlight. And even though the Nikon’s focusing system is super fast, we couldn’t get super tack-sharp images. Again they weren’t awful but didn’t have the fine detail we like.

The videos are good, not great. The .MOV files handle motion well, but they don’t have the richness of AVCHD. It’s a real plus the power zoom is quiet since no noise is picked up as you frame your subject.

We really have difficulty recommending the V1 as tested simply because it’s wildly expensive, and the results don’t measure up to the competition. Think about this for a moment: you can buy a 24-MP Sony NEX-7 for $1,500, with an 18-55mm lens and a flash. Would you rather own that camera with its nearly universal high ratings, APS-C sized sensor and AVCHD video, or the V1? Case closed. Now, what about the V1 with a flash and kit lens for about a grand? More palatable, yes — but why not a 16MP Nikon D5100 DSLR kit for $850? You get the point. You have many more options available and should pursue them. Although we liked really, really liked the new power zoom and the SB-N5 Speedlight, you should pass the V1 by.