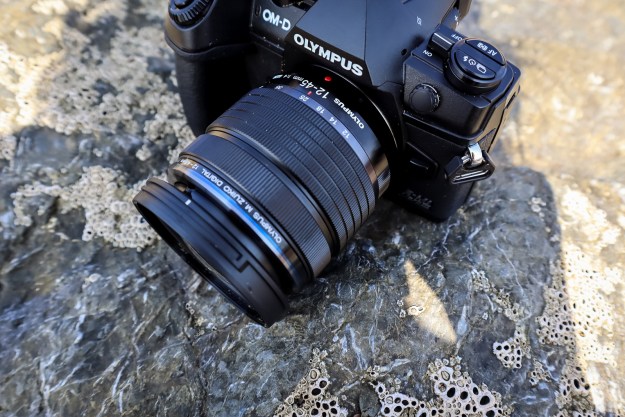 Taking the mirror out of the camera creates a smaller body, but with lenses, there’s nothing to remove to create smaller optics. While some brands have been able to shave off a few ounces, lenses still fall far behind in portability. The Olympus M.Zuiko Digital ED 12-45mm F4.0 Pro, however, is both the most compact and lightest out of any lens in this class.

Part of that is thanks to the smaller Micro Four Thirds format, but this new 12-45mm is still impressively small. Olympus says there’s almost 190 precision-machined parts inside the lens’s 2.76-inch long body. But despite the size, Olympus managed to pack in near-macro capabilities, excellent sharpness, and pro-level weather-sealing.

The question is, can the smaller size and lower price make up for having a narrower aperture over Olympus’ existing f/2.8 option? We paired the lens with the new Olympus OM-D E-M1 Mark III to find out.

Weighing just under nine ounces, the Olympus 12-45mm f/4 Pro is a lens that feels well-balanced mounted on the front of a mirrorless body. Olympus says that it’s the most compact and lightest in its class, but the Four Thirds sensor with its 2X crop factor already gives it an edge, since the lens is being compared to 24-90mm full-frame lenses.

While the lens is lightweight, Olympus didn’t skip out on the weather-sealing. My review sample survived an accidental dousing by an ocean wave and was no worse for wear.

The Olympus 12-45mm f/4 is constructed from 12 elements in nine groups, including Zuiko Extra-low Reflection Optical coating to fight flares and ghosting.

The lens has a metallic build and feels sturdy in the hands. The smaller size, however, leaves less room for controls, with just the zoom and focus ring. Both are smooth and easy to adjust.

Unlike many other Olympus lenses, the focus ring doesn’t retract to switch to manual focus. There’s also no room for a focus scale.

Besides covering a decent zoom range, the Olympus 12-45mm f/4 Pro also performs at near macro levels, with a 0.5X reproduction ratio (35mm equivalent) along the entire zoom range. That creates a good level of versatility in such a small lens, allowing you to move from wide-angle to mid-telephoto to macro without swapping lenses.

The autofocus was able to keep up and locked on to subjects quickly and accurately. It didn’t seem to struggle or hunt back and forth in limited lighting, either, a good sign for a relatively slow lens.

While small, that Pro in the name puts the 12-45mm in Olympus’ family of high-end lenses — and it shows. The lens overall captures some sharp, colorful images while keeping most distortion minor.

Sharpness is excellent throughout the zoom range, even when shooting wide open. There’s some subtle difference in f/4 to f/5, but at an amount so low, it’s likely inconsequential in real-world shooting.

The lens has a slight vignette on the corners at 12mm and 45mm. Both are minor enough to reverse in post-processing.

At 12mm, there’s some noticeable barrel distortion that decreases as you zoom in. The distortion isn’t outside of the norm for a wide-angle zoom, and can be corrected with a few tweaks in post. Once editing programs add support for the lens, a quick profile correction should be an even faster fix.

Flare is overall well controlled. At the wrong angle, the light will create a small green flare. Smaller light sources also have a tendency to starburst.

Chromatic aberration was also tough to find. I spotted some slight purple and blue fringing along high contrast objects towards the edge of the frame, but had to really look for it.

While image quality is solid, the f/4 aperture isn’t very bright for a pro lens. That, mixed with the Micro Four Thirds format, makes it harder to get creamy smooth backgrounds. It also makes for a poor combination for low-light shooting. Given the lens’ focus on portability, these are trade-offs that customers are likely to accept.

The Olympus M.Zuiko Digital ED 12-45mm F4.0 Pro, available beginning April 7 for about $650, is a solid little lens capable of snapping some great pictures. The durable build and small size mixes with the near macro-capabilities and wide range to create a lens that’s likely to spend a good deal of time mounted on the camera.

The smaller size does eliminate some common design elements, like easy switching from auto to manual focus and a focus scale, however. The narrower f/4 aperture also isn’t ideal in every scenario.

The metallic build and weather-sealing should help this lens deliver several years of use, and likely won’t be replaced for many years.

Yes — if you have a bigger budget and a little more room in your camera bag. The M.Zuiko ED 12-40mm f/2.8 Pro has the same tough build and is also designed for high-end image quality. It is, however, 4.5 ounces heavier and about $350 more.

Topics
Parrot’s 4G-connected Anafi Ai drone is the Google Maps car of the skies
DJI Air 2S enters pro territory with its one-inch camera sensor and 5.4K video
Fujifilm X-T4 vs. Fujifilm X-Pro3: A difference in form and function
The best point-and-shoot cameras
How to remove the background from an image
Instagram boss says to expect even more video content
6 awesome Earth images captured from the ISS in July
This GoPro Hero 10 bundle is $100 off at Best Buy today
The best iPhone tripods for 2022
Watch this Mavic 3 drone soar above the world’s highest mountain
How to watch DJI unveil an all-new drone today
DJI Avata vs. DJI FPV: Which first-person drone is best for you?
Astronaut reveals source of ‘intriguing’ bright light on Earth