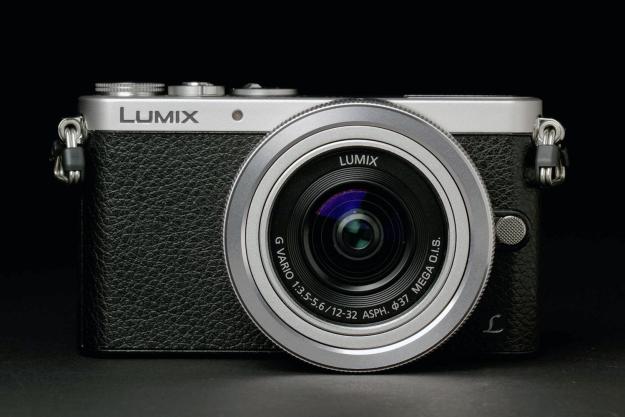 “It may look like a pocket camera, but Panasonic’s Lumix GM1 is a serious Micro Four Thirds shooter that lets you swap lenses.”

Panasonic has one of the smallest interchangeable lens cameras (ILC) available. In fact, the 16-megapixel DMC-GM1 ($750) mirrorless Compact System Camera (CSC) is unbelievably tiny, yet it still has an outsized number of features. Could this mini marvel replace your pocket camera and accompany your smartphone as your new “walking around” camera? It may offer similar shooting capabilities as larger ILCs, but expecting DSLR-like results may be a bit lofty.

Our tour of the GM1 won’t take long, because there’s hardly any surface area to put any buttons! The sleek, retro body measures just 3.9 x 2.2 x 1.2 inches, and weighs 7.2 ounces with battery and card. Its size is similar to Samsung’s NX Mini, which makes that the GM1’s closest competitor when it comes to size. Naturally, the depth increases when you attach a lens, but even with the kit 12-32mm lens extended, it makes the camera only 3 inches deep and weigh 10.2 ounces. No matter how you slice it, the GM1 is petite and easy to carry. It is far from a glorified compact digicam, however, since the camera has a magnesium alloy frame for durability as well as offering interchangeable lenses and loads of photographic adjustments. If the basic black and silver color combo isn’t to your liking, an orange/silver color scheme is also available.

The main feature on the front is the Micro Four Thirds mount, so there’s an excellent selection of glass available from Panasonic, Olympus and third-party vendors to choose from. Since the MFT digital factor is 2x, just multiply by two for the 35mm equivalent. In the case of the kit lens, it’s a very limited 24-64mm, but the selection of MFT lenses covers everything from pancake primes to telephoto zooms. Also on the front are an AF Assist lamp to achieve sharp focus and a lens release button.

The top deck has a built-in flash, stereo speakers for the Full HD AVCHD videos, and a circular switch for changing focus type with a Function 1 (Fn1) button in the middle of it. Fn1 is customizable, with Wi-Fi as the default setting. There are more than 30 choices available, as well an additional five Function settings accessible on the rear touchscreen. In other words, even with the lack of hard keys, there’s ready access to your favorite options. Moving along the top is the on/off lever with shutter button as well as a mode dial with 10 choices that includes two Custom options. Clearly the GM1 has a point-and-shoot vibe but it’s anything but. The lack of a hot shoe, however, is one negative, but the built-in flash helps make up for it.

Panasonic deserves a round of applause for designing a very compact and lightweight mirrorless camera.

The rear has a fixed-position 3-inch touchscreen that’s rated 1,036K dots (sorry, no selfies). It’s a very high-quality display and we had no issues using the camera in direct Arizona sunshine once we turned the brightness up to +5. Also here is a switch to pop open the flash, a red-dot video record button, as well as keys for Playback, Quick Menu/Return, and Display. There’s a four-way controller with surrounding jog dial and center Menu/OK button. The points of the dial give access to White Balance, Burst, AF mode, and Exposure Compensation. Panasonic supplies a 56-page starter guide that you should check out, but you’ll quickly familiarize yourself with the camera after playing with it for a short while.

On the right side is a compartment for the USB and HDMI outputs, while on the bottom are slots for the battery and SD card. The battery is rated only 220 shots but this is to be expected with such a small-sized power pack. A spare might make sense if you plan to be out-and-about all day without access to an outlet.

The GM1 kit comes with the body and 12-32mm Vario f/3.5-5.6 zoom, but you can buy a body-only configuration. Also included are the battery, plug-in charger, USB cable, strap, and basic manual. The supplied CDs have the full owner’s manual and software package, which includes PHOTOfunSTUDIO 9.2 AF for handling images and SilkyPix Developer Studio 4.1 SE for working with RAW files. There’s also a link for a trial version of LoiLoScope software for editing AVCHD videos.

Panasonic covers the GM1 with a one-year parts-and-labor warranty, but only 90 days for accessories and 10 days for the battery.

Before getting into performance, we’d like to discuss ergonomics since the GM1 is so darn small. To be honest, we found it a little too tiny for our liking, but we know many others will find the size appealing, so doing your own hands-on is absolutely imperative. There’s a small area to rest your thumb, but on many occasions our thumb slid onto the touchscreen anyway, causing the display to inadvertently change. This can be disabled but it takes away all of the onscreen functionality, including access to function tabs and Touch AF. Also, because the physical buttons are small, you have to use a fingernail to make adjustments on the four-way controller, which is quite tedious. With time we’d imagine users would get used to operating this mini camera, but caveat emptor.

The GM1 can take good photos, but its performance lags behind larger cameras.

The GM1 has a 16-megapixel Micro Four Thirds sensor – smaller than APS-C chips in competing ILCs such as the Sony Alpha A5000. We set the camera to maximum resolution for stills and video (4,592 x 3,448 pixels, 1080/60i AVCHD); the camera has the ability to show RAW image files, too. Our rig consisted of the body and supplied Vario f/3.5-5.6 12-32mm manual zoom lens. As noted, this is a very limited range, but the small outfit makes it appropriate for street photography as well as basic landscapes, portraits, and anything that doesn’t require a long focal range.

We started with the mode dial in iAuto (Intelligent Auto) then changed settings as the situation warranted. Beyond iA are PASM, Creative Video for adjusting shutter speed and aperture in your movies, two Custom options, Scene (23 choices), and Creative Control; the latter gives you access to eight special effects (High Key, Monochrome, etc.). It’s pretty straightforward and what you’d expect from a $750 camera, but again, don’t let the small size fool you.

Recently we reviewed the Nikon D5300 DSLR and took the GM1 along to do some side-by-side comparison. It’s really not a fair fight since the D5300 has a 24MP APS-C sensor versus the 16MP smaller MFT sensor. Even though the D5300 won hands down – to be expected – what was very startling was how much poorer the Panasonic was in comparison. The GM1’s 23-point Contrast Detect focusing system, metering, sharpness, and color depth really lagged behind. Yes, we know one’s a fairly hefty DSLR that costs a hundred bucks more but the mirrorless Panasonic is hardly Goodwill pricing. Many images were shot on a fast-moving boat using Intelligent Auto but the Nikon handled it while the Panasonic didn’t.

We’ve tested several CSCs recently with improved hybrid AF systems that use a combo of phase detection (PD) and contrast detection (CD) focusing, with results that are much more accurate than purely CD, as used in the GM1. The Sony Alpha A6000 has a hybrid AF system and the camera kit is $799, with a 24MP APS-C sensor like the D5300; if you can afford $50 more and don’t mind a larger-size camera, you can get a stronger-performing camera.

But, that’s not to say that the GM1 is a completely bad camera. Once we had it on solid ground, results were much better as we moved into PASM modes. Colors were more on target, especially outdoors, and there were few issues grabbing focus. Still, depth and richness simply couldn’t match a larger APS-C sensor, however. This was especially noticeable at 100-percent enlargements on a 27-inch monitor; smaller sizes looked better, with good color and sharp focus. And we found auto white balance of indoor shots to be a little warm, but this was resolved by moving into manual indoor settings.

We noted earlier the GM1 has a rather weak battery spec, which we can confirm from our tests. You’ll definitely need a spare if you don’t want to carry around the plug-in charger.

On a more positive note, the GM1 is responsive, offering 5 frames-per-second shooting – 7 frames maximum if you’re shooting RAW. With JPEGs it’ll keep going for about 15 images, then noticeably slows down, which is good for a camera this small. It also handles higher ISOs with aplomb. The range is 200-25,600 in Auto and Intelligent ISO settings. In our tests, images were fairly noise free to 800 and 1,600, with 3,200 and 6,400 as the highest you should go. The camera’s built-in image stabilization system also worked well at minimizing blur on steady ground – not so much on a boat, a decidedly tough task that you’ll notice in the sample video. The camera has a top shutter speed of 1/16,000th of second, which is faster than even enthusiast DSLRs, but big specs don’t mean much if they don’t work well in the real-world; the camera simply couldn’t capture boatsspeeding by.

The camera shoots Full HD 1080/60i movies using the AVCHD format (24 Mbps), and they are really good. Color is right on the money, with no focusing issues and even-level exposures – you’ll like them. The stereo mics turn gentle breezes into roaring monsoons, however, even with wind noise reduction enabled. This is typical for almost every digital camera, no matter if it’s a digicam, DSLR, or CSC.

The GM1 has built-in Wi-Fi that works with Panasonic’s Image App (iOS/Android); there’s no NFC capability, but that’s not a huge loss. After downloading the program we found pairing devices very cumbersome and not very intuitive. It’s not nearly as refined as Samsung and Sony software. Once we wrestled with it enough, we could use the app to remotely control the camera. On the plus side it offered more controls than apps from other camera makers, and there are tons of direct links to social media sites. Panasonic has a long way to go to catch up with the leaders though.

Panasonic deserves a round of applause for designing a very compact and lightweight interchangeable lens camera. Overall, the camera is capable of taking good pictures, but performance is a bit uneven. With that said, we feel you’re giving up way too much in terms of quality and usability – especially for $750 MSRP. The 16MP MFT sensor just doesn’t deliver the detail you’d expect at this price level. Now, if the price were to drop dramatically, that would be another story, but it would have to go way down to make it intriguing. The Sony A5000 is definitely larger but it’s a far better camera for much less – $499, to be exact. Better yet is our Editor’s Choice, the Sony A6000 for $799. If you want to stick with a Micro Four Thirds model, there’s also Olympus’ $799 OM-D E-M10 to consider. And if you really want a great carrying-around camera without dealing with lenses, there’s always highly-rated digicams such as the Sony Cyber-shot RX100 Mark II and Mark III ($649 and $749, respectively) or the $799 Canon PowerShot G1 X Mark II.

So, there are stronger options out there, but the GM1 has them beat in the size department. If Panasonic can improve performance in a sequel while retaining the same size, then we’ll have a serious challenger.