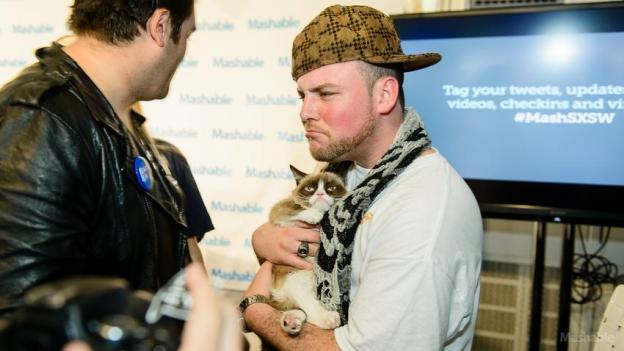 A great meme is a beautiful thing – a gift from the awkward conversation avoidance gods. Been putting off that dinner with your aunt who’s kind of racist? Trying to think of a way to make your boss laugh? Just really bored and alone? Memes bring us all together … unless, of course, they overstay their welcome. Think of the first time you saw a Harlem Shake video versus the 100th. Gotta get ’em hot and young, which is the creepiest way I could possibly put it.

Memes have a definite lifespan that goes something like this: Underground Internet treasure —> Reddit —> blogged about relentlessly —> your friends are all over it —> your co-workers send it around—> your boss references it in a conference to make you think she’s cool —> forward from your grandpa —> never want to see this freaking thing again. Some steps may be out of order depending on your social circle (we don’t know your life!), but it’s a good general guideline.

Let’s look at the lifespans of five super-popular memes for variations on this theme:

Grumpy Cat (real name: Tardar Sauce) is so famous she met Anderson Cooper (and our own Molly McHugh). She’s a normal cat with a completely ridiculous expression on her face. Like Boo the obscenely adorable Pomeranian before her, Grumpy Cat’s party trick is looking intensely cantankerous. Some might even say CATankerous. But some would be making an awful pun.

So how did Grumpy Cat become a meme? Look no further than Reddit. Grumpy Cat’s owner’s brother posted pictures of her looking utterly disenchanted on the /r/pics subreddit back in September 2012.

It didn’t take long for everyone to become obsessed with how disgruntled this cat looks. As you can see from the Google Trends chart below, there’s a huge bump almost immediately: People went crazy for it on Reddit, and BuzzFeed ran an article on Grumpy Cat the same day the pictures were posted. So this little kitty was basically an instant Internet sensation. And as the chart shows, interest is still very high in the petulant pet, so her stay may still be on the rise.

Scumbag Steve predates Grumpy Cat, and while both memes did not choose to achieve Internet fame, Scumbag Steve’s ascent to Internet notoriety is a little more dicey because he’s a real person who had little say in becoming a viral icon.

The good news is Scumbag Steve (aka Blake, from Boston) wholeheartedly embraces his fame.  As he explained on his blog “I’m down with the meme. Like I had a choice?” He appears at meme-related events and seems like a fairly jovial dude.

How did he get here? The image of a young guy with a tilted flat-brim baseball cap and a punk look on his face was lifted from the cover of a rap album called “Ma Gangsta” by the group Beantown Mafia. Scumbag Steve admitted later that his mom took the photo and that she cried when she saw what the Internet had done with it. As expected, Reddit fueled a surge in popularity, since /r/trees users made a lot (really, a lot) of Scumbag Steve images. People even took Scumbag Steve’s hat and photoshopped into onto other images, creating what is essentially a sub-meme:

Scumbag Steve’s popularity isn’t at quite the high it used to be, but there’s still a clear interest in the meme – probably because it’s so versatile (and the person it’s about is such a willing participant in it all).

Overly Attached Girlfriend occupies the same corner of the Internet as Scumbag Steve: Both memes use pictures of unwitting people as a canvass for jokes. And then those people get in on the jokes and fuel it until a viral sensation is born.

In the case of Overly Attached Girlfriend, it all started with a YouTube video. A Justin Bieber fan posted a parody video of herself singing, and even though the lyrics about being a super-clingy girlfriend were obviously not to be taken seriously, the intense way she delivered the lines grabbed plenty of attention, as you can see for yourself:

People who saw the video started making “advice animal” memes about the girl – the same type of meme as Scumbag Steve, with a center image and text along the top and bottom. People on Reddit and YouTube and other sites decided the girl looked like an older meme of a clingy mantic called Crazy Girlfriend Preying Mantis. The girl behind the video, Laina Morris, quickly capitalized on how fast it spread, and she’s still using her meme fame to boost her YouTube profile, as evidenced by her recent tweet:

No word on whether Overly Attached Girlfriend is actually seeing someone. Did I mention that Scumbag Steve is a father, though?

Gangnam Style is a very different beast than Grumpy Cat, Scumbag Steve, and Overly Attached Girlfriend – for several reasons. First of all, it’s a music video, and more importantly, the person behind the YouTube smash orchestrated the whole thing himself. South Korean pop star Psy wrote, choreographed and performed in a satirical electropop music video called “Gangnam Style,” and the offbeat visual style matched with a catchy sound and over-the-top dance made “Gangnam Style” the “Macarena” of the 2010’s.

And Gangnam Style is a mega-meme, something that pretty much everyone you talked to in 2012 knew about – the YouTube video has over a billion views, which is hard to wrap your head around.

Psy’s video is much slyer than people give him credit for; it pokes fun at a particular brand of Seoulite who obsesses over materialism without realizing how silly their actions are – for instance, women who eat barebones kimchi-and-rice lunches so they can afford Starbucks, which is usually pretty pricy in areas like Gangnam (around $6 for a latte). The Atlantic has a great breakdown of the satirical elements.

Gangnam Style got a few different boosts from early celebrity endorsers, including T-Pain, whose tweet in support of the rapper got 2,336 re-tweets:

Words cannot even describe how amazing this video is… youtube.com/watch?v=9bZkp7…

At its height, the Gangnam Style video was so viral that people were spontaneously doing it at baseball games. It even touched me personally: It was played at a wedding in Plovdiv, Bulgaria I attended in November 2012 and almost everybody did the dance, including the groom’s 80-something grandmother (I realize that’s anecdotal evidence but still, the Bulgarians at the wedding looked at me like I was crazy when I put on Beyonce … yet they knew Psy.)

Most people got pretty sick of Gangnam Style, but you can tell that it was a meme with legs by the way popularity hovered for longer than usual on Google Trends:

Psy retired the song, so it’ll probably fade gracefully into oblivion until enough time has passed for people to get nostalgic about it.

Not every meme remains in the confines of the Internet. Some trends mysteriously emerge and others might be extremely savvy marketing ploys, and then sometimes they spill off the Internet and into real life. OK, maybe just Bros Icing Bros came about that way, but it’s a valid example. It didn’t start on Reddit or YouTube – according to Know Your Meme, Bros Icing Bros started as a website registered to a supposed college student and then just took off running, turning into a real-life craze all over the place. It’s a very simple drinking game in which you get stuck drinking a Smirnoff ice, as you can see:

Even rapper Coolio was iced during the height of the meme. Bros icing bros has fallen out of favor as a Google search term, and as you can see by the Google Trend chart, it had a much steeper decline than some of the other memes we looked at:

But that doesn’t mean Bros Icing Bros fell by the wayside entirely. Since it’s the kind of meme that shifts into a real-life activity (like planking) people are still out there, getting iced. In fact, one woman recently accepted a proposal from her boyfriend in the form of a bro icing his beloved. Her sister-in-law to be captured the moment with an Instagram collage, with the caption “Of course my brother would propose to his girlfriend like a true #bro … With an epic Smirnoff #icing!

So as you can see, even memes that fell out of favor two years ago can still be relevant in the name of romance.

Celebrate Hallowmeme with one of these truly iconic, Internet-inspired costumes

I can haz job? Meet the ‘meme manager’ who spins cash from Internet sensations

Are memes the pop culture art of our era?