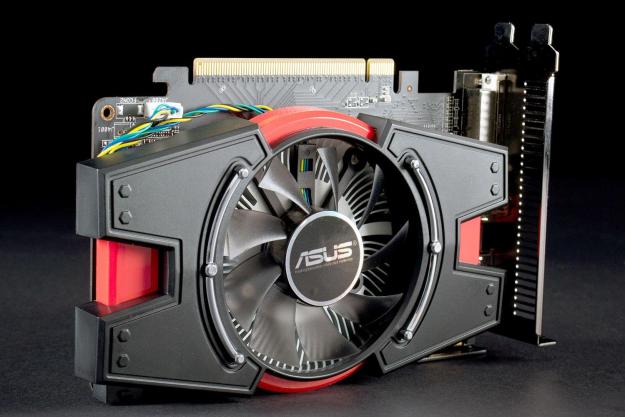 “Though it has limits, the Asus Radeon R7 250X proved its worth by offering acceptable performance and easily defeating its closest competitor, Nvidia's GTX 650.”

Graphics cards sold for around $100 (or less) have had a history of being a consumer trap. Uninformed buyers typically purchase them with the belief that they’ll provide adequate grunt, when in fact, these cut-rate cards often fail to run the latest titles at acceptable framerates. To make matters worse, cheap cards usually aren’t a good value compared to slightly more expensive, but much more powerful alternatives.

With the Asus Radeon R7 250X, AMD and Asus are trying to break this tradition. The card is offered for just $109, which is extremely affordable, yet has a comparable amount of stream processors as its big brother, the R7 260. Can this small, cut-rate card provide real gaming chops, or is it just another in a long line of budget-priced busts?

The Asus Radeon R7 250X, like several other recent Radeon releases, is actually a re-badge of an earlier card; the Radeon 7770 GHz Edition. This means that, like the Radeon 7770 GHz Edition, the 250X features 640 stream processors, while clocked at 1,000 MHz. While the card can support up to 2GB of RAM, our review unit was equipped with just 1GB. The R7 250X’s GDDR5 RAM runs at 4.5 GHz through a 128-bit interface.

Raw compute performance is rated at 1.28 teraflops, while raw memory performance clocks in at 72 GBs per second. These numbers are not particularly impressive, as they fall behind next-gen consoles. For instance, the PlayStation 4 quotes 176 GBps of memory bandwidth and 1.84 Tflops of graphics compute performance.

The 250X is a double-height card, which means that it will obstruct any PCI slot below the PCI-Express x16 slot that it’s installed in, and is about 8 inches long. This is mid-sized by modern standards, and the card will fit into most ATX towers without any issues. Buyers should note that the 6-pin power input, which delivers up to 95 watts of juice to the card, faces the side rather than the front. This can make attaching the power connector awkward if your tower is particularly narrow or, as was the case with the Falcon Northwest Talon we use for testing, if there are fans mounted to the side panel of your PC’s case.

Though Asus’ version of the AMD Radeon R7 250X is basically a reference design in terms of specifications, size and features, the company does provide a custom cooler. Asus claims that its cooler protects the card from dust better than AMD’s version, and also produces less noise when compared with the reference design. The company also says that its superior power components reduces power noise by 30 percent. Power noise is the buzzing that graphics cards emit under certain loads.

We have no objective tests to measure these claims at this point, but we noticed that the R7 250X buzzed less when showing scenes notorious for the problem, like 3DMark’s Ice Storm benchmark. These improvements come with a price bump though: the Asus version of the R7 250X costs $109, which is $10 more than the going rate for most 250X variants.

Though the base MSRP of the Radeon R7 250X is $99, we found that R7 250X-based cards were more likely to be marked up (as with our Asus review unit) than down.

We noted that some variants sold at $99 while only being clocked at 950 MHz, though that wasn’t the case with every model. We also found some overclocked variants sold at a premium, and one model, also from Asus, with 2GB of GDDR5 RAM.

If you’re looking to up your game for no more than a Benjamin, look no further; you’ve found your video card.

The price positioning of the 250X is tightly sandwiched between the R7 250, which only has 384 stream processors and sells at an MSRP of $89, and the AMD Radeon R7 260, which has 128 more stream processors than the 250X and is sold for $129. This doesn’t give the card much pricing wiggle-room. On paper though, it seems like the 250X could be the best AMD-based bang-for-the-buck budget card.

Nvidia’s main competitor to the 250X is their GeForce GTX 650 card. This card can be had for as little as $99, but most versions sell between $110 and $120. The GTX 650 is a smaller card, as most variants are no longer than six inches, and its reference design only requires 64 watts of power.

The GTX 650 also quotes only 812 Gigaflops of compute performance, but a slightly higher memory bandwidth of 80GBs per second. Offering a slower card at a higher average price obviously puts Nvidia on the defense, so the company has countered by offering buyers $150 of in-game credit good for three games; Heroes of Newerth, Path of Exile and Warface.

Falcon Northwest’s Talon serves as our test system. The tower boasts an Intel Core i7-4770K processor overclocked to 4.5 GHz, 16GB of RAM, and two 240GB SSDs configured in RAID 0. These impressive specifications make it unlikely that any portion of the system, aside from the video card, will be a bottleneck.

We began our tests with synthetic benchmarks. These tests are not games, but are designed to approximate the strain of a graphically intense title. They mimic a variety of scenarios and, because they always follow the same loop, are extremely precise.

Fire Strike is a much more complex and demanding test. In fact, it’s so demanding, that some low-end systems make Fire Strike look like a slide-show.

Valley is not Unigine’s most demanding benchmark, but it’s arguably the most beautiful. The test loops consist of sweeping vistas as well as beautiful close-ups of flowers and forests. We ran this benchmark at 2560×1440 with DirectX 11 and 4x Anti-Aliasing enabled.

Heaven is a more demanding benchmark than Valley, as it focuses on complex geometry and the use of tessellation. We ran this benchmark at 2560×1440 with DirectX 11, 4x Anti-Aliasing and normal tessellation enabled.

While synthetic tests provide a good indication of general, relative performance, they can’t substitute for real world gaming tests. We played several games with the Radeon, and the results ranged from pleasing to adequate. All games were tested at 2560×1440.

This strategy game is deceptively demanding due to its detailed campaign map and use of impressive water and cloud effects. We first ran it at the Medium preset, and the Radeon responded by producing an average of 45 FPS, with a maximum of 53 and minimum of 39. This beat the GTX 650 handily, as it reached an average of only 33 FPS, with a maximum of 45 and a minimum of 26.

Subjectively, the game was playable on both cards at Medium, but felt annoyingly slow at Extreme. This was most noticeable on the GTX 650, but the 250X also provided a less than perfect experience.

Respawn Entertainment’s new shooter uses the Source engine, so its visuals aren’t on par with other modern games like Crysis 3 or Battlefield 4. Still, it’s an attractive game, and one which emphasizes smooth gameplay. Unfortunately, neither card delivered here.

While the Radeon R7 250X clearly performs better, both cards produced minimums that dipped well below 30 FPS even at Medium detail. Unlike with some other games, these minimums were often prolonged. Titan-on-Titan combat was particularly demanding, and resulted in framerate dips low enough to make effective fighting difficult. The GTX 650 was even worse though, with Titan combat often turning into a slide-show.

The latest epic-scale shooter from DICE hasn’t proved to be a match for systems packing serious hardware, but it proved to be a tough nut for these low-end cards to crack.

Clearly, Ultra was not playable with either card. Medium was playable on both, but the Radeon R7 250X was noticeably more enjoyable. Even the 250X saw its framerate dip into the mid-20s, however, which could reduce a player’s effectiveness in online multi-player mode.

This online sensation is easily the least demanding game in our real world testing round-up. Though there was a clear difference in the performance of each card, both proved capable of providing a great experience.

We saw no subjective difference in how the game ran with each card. Gameplay was buttery-smooth even at the end of the match, which is typically League of Legends‘ most demanding moment.

Surprisingly, the Radeon R7 250X didn’t draw more power than the Nvidia GTX 650 at idle. Both cards consumed an average of 72 watts.

Though this is a win for Nvidia, we thought the gap might be larger, as Nvidia’s card quotes a maximum power draw that’s over 30 watts less than the 250X. We saw a maximum difference of 15 watts, which is far too small to dent your power bill.

One point is clear; the Asus Radeon R7 250X is faster than its Nvidia competitor, the GTX 650. Much faster. The gap sometimes widens to a 35 percent improvement, as is the case with 3DMark’s Fire Strike synthetic benchmark, and when running Total War: Rome II at Medium detail. That’s huge given that both cards can be purchased for around $100.

The Radeon also proved itself to be a capable, if not powerful, option for gamers on a tight budget. While we had difficulty with some games, most notably Titanfall and Battlefield 4, this criticism is tempered by the fact that we tested at 2560×1440.

This resolution boasts about 1.6 million more pixels than 1080p, and seriously taxes modern video cards. At 1080p, when the Radeon R7 250X is paired with a fast processor, it can play any modern game at an enjoyable framerate. You’ll have to settle for medium detail in demanding titles like Battlefield 4, however.

We wish the Radeon matched the reduced size and lower power consumption of Nvidia’s alternative, but the Asus Radeon R7 250X is still small enough and efficient enough to fit in most mid-tower computers. If you’re looking to up your game for no more than a Benjamin, look no further; you’ve found your video card.

Topics
Intel Arc Alchemist A380 is finally here to rival AMD’s entry-level GPU
This AMD bundle proves that GPU prices are falling fast
AMD takes a swing at Intel with claims of beating Arc GPUs
Test suggests AMD Ryzen 7 5700X could be a midrange gem
Best Samsung Galaxy Note 20 deals for December 2022
Bad news: AMD may have launched RDNA 3 before it was quite ready
Microsoft Teams Premium uses AI to automatically recap your meetings
Intel’s upcoming laptop CPU may destroy even the best desktop chips
Boston Dynamics’ festive robot video has a surprise ending
Overclockers surpassed the elusive 9GHz clock speed. Here’s how they did it
Amazon starts drone delivery trials in California and Texas
What to expect at CES 2023, from mondo TVs to EVs
12 high-profile tech opportunities for those job hunting