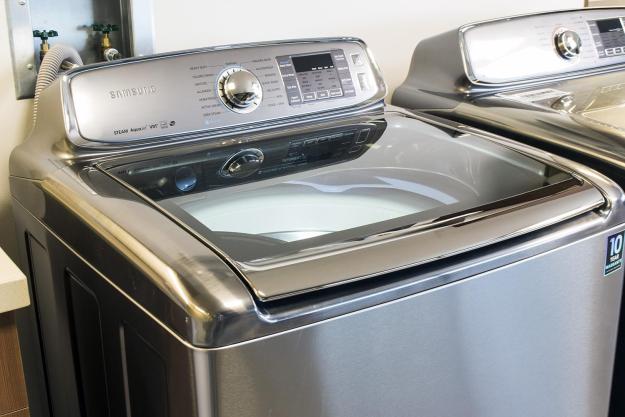 “Big, beautiful and quiet, the Samsung WA56H9000A's intimidating price tag is excused by its wide range of features and strong performance.”

Every large family knows the need for big. Bigger cars, bigger meals, bigger homes; as your head count grows, so do your family’s needs. Laundry is no different. Washing load after tiny load is inefficient, time consuming, and can even have an impact on your power bill.

Samsung may have the answer big families need, however, with its new WA56H9000A washer. Boasting 5.6 cubic feet of internal space, Samsung’s new high-end appliance is the largest non-commercial washer typically stocked in North American retailers. The next largest come in at 5.2 cubic feet and most top-loaders provide somewhere between 4 and 5 cubic feet.

Size will save you time, but it won’t save you money. Retailers want at least $1,349 for the Samsung WA56, which means it’s often the most expensive washer stocked, as well. Let’s see if this giant offers premium features to match its premium price.

The future is stainless

The WA56H9000A — and the also excellent companion dryer, the DV56H9000EP — certainly looks the part of high-end appliance. Stainless steel lines the exterior and Samsung doubles down on shiny by accenting it with silver and chrome trim (a white version is available, too). All of this adds up to a clean, minimalist look that helps hide the washer’s girth.

And hide it must. The WA56H needs 30 inches of width and 32.3 inches of depth to install, plus an additional 58.7 inches of headroom (to accommodate the washer with lid open). These measurements are not excessive given the washer’s huge interior volume, but they remain several inches larger than a typical 4-to-5 cubic inch top-loader. Buyers should double-check their installation space.

This is one heck of an expensive washer – but you get what you pay for.

Staring into this washer is a bit like staring into the abyss; its sheer size is intimidating and wondrous at first. Once you get over it, you’ll find basic convenience features like trays for fabric softener, detergent and bleach. These are expected extras in most modern washers, but it’s nice to see Samsung has the basics covered.

Parents will be happy to know there’s a child lock feature which can be activated to lock the washer when water is in the drum. As unlikely a danger as it may seem, a washer the size of the WA56H9000A could prove a risk if junior decided to take a dip.

There are not, however, any of the cutting-edge extras you expect from a premium washer. There’s no touch-screen and the available Smart Care app (usable on almost any Android or iOS device) is aimed at troubleshooting rather than remote operation. There are a few washers that provide such features, like Samsung’s WF457AR and LG’s Smart ThinQ, but they remain rare and expensive for their size.

The Samsung WA56 is controlled via a selection knob, which chooses the cycle, and numerous buttons, which customize the settings of each. There are 15 preset cycles ranging from the typical Normal, Heavy Duty, Perm Press and Delicates to more exotic cycles that target allergens, waterproof clothing and active wear.

Each cycle can be further customized with advanced options; an “AquaJet” deep clean, an extra rinse for particularly absorbent laundry, an Eco Mode that saves energy by using cooler water and an optional fabric softener cycle. Water temperature, spin cycle length and load size can be changed, too. A “My Cycle” feature lets you save customized cycle preferences, though you can only save one set of preferences to My Cycle at a time.

All of this may be confusing, but the rabbit hole only goes as deep as you’d like. Some users will want to experiment with Niagara Wash, which uses more water than normal for “enhanced performance,” and Deep Steam, which helps remove tough stains. But there’s nothing wrong with just selecting normal mode and hitting Start.


While we appreciate the number of options Samsung provides, we’re less enthusiastic about how they’re enabled. The control knob is digitally, rather than physically, connected, which means turning the knob doesn’t result in a corresponding change of position. Cycle selection lags input by about half a second and doesn’t move as quickly as the knob itself.

The buttons, too, are prone to lag, and they provide so little tactile feedback that they almost feel like capacitive touch buttons rather than physical, clicky controls. Customizing a wash mode is a far more deliberate process than it needs to be.

We do like the WA56’s LED screen, however, which is easy to understand and provides information about wash time and options. This is an appreciated feature in any washer. However, we found the timer’s estimates a bit optimistic; loads took a few minutes more than indicated. The washer completes each load with a cheerful tune that’s more amusing and subtle than the blaring timers common a decade ago.

Our 7-pound test load is a mix of garments, from khakis to t-shirts to blouses. We threw it into the WA56 and selected normal mode to see how the washer holds up under typical conditions.

Wash performance was strong. We noticed no damage and observation of the load, made possible by the transparent wash lid, showed the clothes moving evenly. The WA56’s high efficiency design lacks an agitator, and as such there’s no pillar of plastic taking up space and preventing clothes from moving freely during a cycle.

Samsung’s LED display showed a full wash would take 53 minutes to complete. In truth, it took 56 minutes. This is quite a long time, but long wash cycles are not unusual in high-efficiency top-loaders. Still, this might be a surprise if you’re upgrading from cheaper, quicker but less efficient model.

Efficiency leads to low noise. At wash the machine produced no more than 58 decibels, which is about the volume most people carry conversation. Spin cycle added an extra ten decibels, which is a noticeable increase, but this peak lasted only a few minutes. Simply placing the washer behind a closet door should be enough to eliminate any distraction the appliance might cause.

Energy Star rates the Samsung WA56 at a yearly energy cost of only $18 dollars when used with an electric water heater. This drops to a mere $10 if a natural gas heater is used instead. In either case, the washer is close to the most efficient in its class, which is impressive given its large load size.

A long warranty – on one part

Samsung slaps a 10-year warranty label on the WA56, but the fine print clarifies that it applies only to “the direct drive motor.” The electronic control board and related parts are warrantied for two years and the stainless drum is warrantied for three years. Both figures are typical though some competitors, like LG, provide a lifetime warranty on the wash drum.

The killer is general parts and labor, which (as is typical in the industry) is warrantied for only one year. A repair after the labor warranty expires can easily set you back several hundred dollars. Still, things could be worse. Some competing General Electric models offer one year parts and labor as their sole warranty.

Samsung’s WA56H9000A is practically in a class of its own. The large wash drum makes it more spacious than the closest competitors; the next largest commonly available is LG’s WT5680HVA, which offers 5.2 cubic feet, and the vast majority of top-loaders provide less than 5 cubic feet.

That said, LG’s alternative is stiff competition. Most retailers sell it for around $1,100, which is a few hundred less than the WA56H9000A’s typical retail price of $1,349. LG’s model also uses slightly less power and offers very similar features. We’ve yet to review it, but on paper it looks worth consideration.

Still, the quality of Samsung’s model can’t be discounted. Compared to the field of $1,000+ top loaders the WA56 is large, packed with features, efficient and quiet. Yes, this is one heck of an expensive washer — but you get what you pay for.