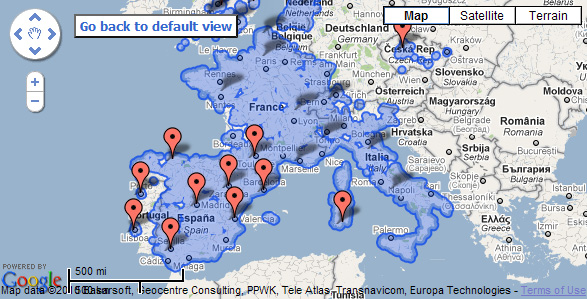 As if Google weren’t feeling the sting of enough hot water in Europe these days, the European Union poured on yet another kettle this week with new demands for Google’s controversial Street View function.

The European Union’s privacy watchdog, the Article 29 Data Protection Working Party, sent a letter to Google suggesting a number of additional privacy safeguards for Street View, in addition to those Google has already implemented. Google already blurs faces and license plates from the public version of Street View, but retains the original images for one year. According to the Party, Google should cut that time to six months, appoint a privacy representative for every country it plans to shoot in to ensure compliance with local laws, and warn cities in newspapers and other public forums prior to bringing in the vans.

Google’s global privacy guru Peter Fleischer responded by justifying keeping unblurred images for a year to improve the accuracy of the system as flaws arise.

Street View, which allows Web users to view a 360-degree panorama of public streets in many countries, is no stranger to controversy. In the past it has faced objections in Japan, Switzerland, Canada, Greece and many other countries, where citizens have complained that the roving camera vans Google uses to produce Street View violate their privacy.

How to easily log in to multiple Gmail accounts at once

How to block an email address in Gmail