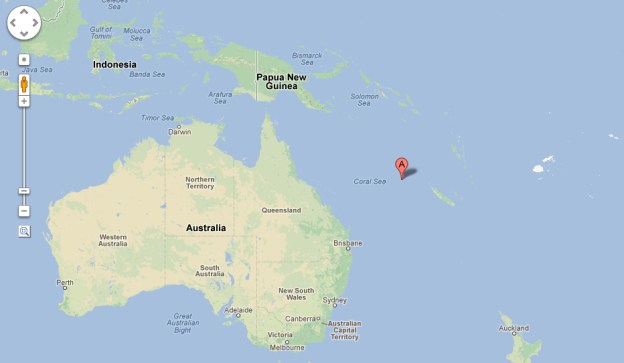 It’s hardly a fail on the scale of Apple Maps – with its farm-labeled-as-an-airport fiasco and other such mishaps – but it will nevertheless be refreshing for some people to learn that Google, widely regarded as the current king of online mapping, can also get it wrong from time to time.

According to Google Maps and Earth, as well as other maps of the world, there is in the Coral Sea off Australia a tiny piece of land called Sandy Island. Well, best you don’t go there on vacation – because it doesn’t actually exist.

Scientists from the University of Sydney thought there was something fishy about the island when they saw that widely used navigation charts showed the island apparently situated in deep water.

“We wanted to check it out because the navigation charts….showed a water depth of 1,400 meters in that area – very deep,” the University of Sydney’s Maria Seton told the AFP news agency.

The scientist added, “It’s on Google Earth and other maps so we went to check and there was no island. We’re really puzzled. It’s quite bizarre. How did it find its way onto the maps? We just don’t know, but we plan to follow up and find out.”

Interestingly, the phantom island has appeared on other maps and publications for at least the last 10 years. However, French government maps do not show Sandy Island, and it’s in French territorial waters that the island is located….or at least it would be if it actually existed.

On Google Maps, Sandy Island appears in satellite view as a gaping black hole about 20 miles long. Switch to Map view and yep, it’s still there, even though it shouldn’t be.

“We all had a good giggle at Google as we sailed through the island,” Steven Micklethwaite from the University of Western Australia told the Sydney Morning Herald. “Then we started compiling information about the seafloor, which we will send to the relevant authorities so that we can change the world map.”

So what does Google make of this minor mapping mishap? Nabil Naghdy, Google Maps product manager for Australia and New Zealand, said the Mountain View company works with many different public and commercial data sources for the creation of its maps.

“The world is a constantly changing place, and keeping on top of these changes is a never-ending endeavor,” Naghdy told the Herald, apparently overlooking the fact that Sandy Island likely never existed in the first place.

He added that whenever users of Google Maps find an incorrect entry, they should hit the ‘Report a Problem’ button on its website to let them know. So next time you’re sailing the seven seas and happen upon open water where an island should be, you know exactly what you should do.