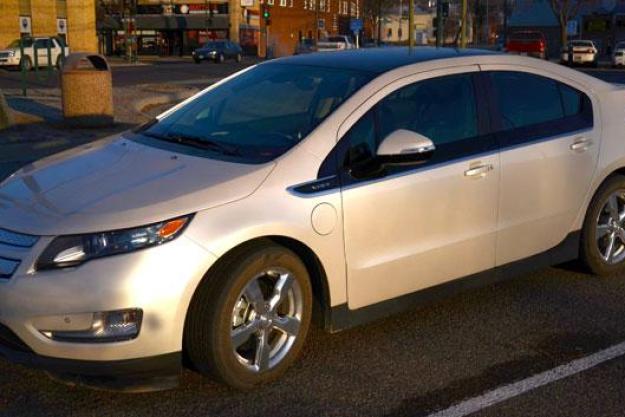 “In the end, the Volt has not matured much since the debut.”

What a difference a year makes. Since reviewing the Chevy Volt almost exactly one year ago, the EV infrastructure in the US has blossomed with charging stations on almost every street corner, shopping mall, and school across this great land. You have to actually look hard to find any normal gas stations these days, where old-school ICE (internal combustion engine) drivers fill up their tanks.

We’re kidding. Actually, they may have added a few more charging stations in California.

The reality is that the 2012 Chevy Volt is still a great in-between car that runs for about 35 miles on an electric charge, and then starts re-charging itself using a normal gas engine. Chevy engineers still claim that the gas engine does not directly propel the car, but to the average commuter, the point is immaterial. There is a gas engine, and you have to buy gas regularly. In fact, after testing the Volt for a two-week loan (a bit unusual for most car tests) where we ran on EV only for a week and then on gas for a week, we discovered some hidden surprises about what it means to drive the Volt every day to work.

One is that you end up being a maintainer of electric charging. After each 35 miles, you have to run an extension cord out to the car at work, or leave the vehicle overnight in your garage, tethered to a wall outlet. Over two weeks, it becomes more annoying than we imagined. Still, there’s an incredible sense of satisfaction when you have driven gas cars your entire life and can get to work and back without every paying for fuel. It means, our fuel economy with the Volt hit a high of 222MPG. Sadly, during the week of using only the gas engine, we only hit about 25MPG.

The new 2012 Chevy Volt adds some very minor updates. On the center stack, where there are about 40 buttons in a confusing array of technology overload, the buttons are a bit easier to identify, and Chevy now uses better lighting accents, especially for the drive selector between the seats. Another small change is that you can disable the traction control on the vehicle. We noticed a few slight interior changes, such as a more subdued color scheme and no spiral designs on the interior side panels.

Chevy did lower the price $1000 on the 2012 version, almost as a way to say that the vehicle now costs under $40,000. The base price is now $39,995 but a few options, like a premium speaker system and DVD drive, are now extras that you have to add above the base price. The Volt qualifies for a government credit of $7500, which does help bring the price down to a sane level.

The 2012 model does not address some of the problems in the original model, and we’ll touch on all of them. However, instead of going over all of the unchanged features (for example, the exterior design remains unchanged and there are still several mechanical features that make sense, such as a pump you use to raise and lower the seat instead of an electrical switch), we decided to focus on the economics of driving this extended-range hybrid over the two weeks of testing and what we’d like to change.

In the first week of testing, the Volt generally provided about 35 miles of driving from a charge. Oddly, it didn’t matter too much how we drove – and each day we drove a bit differently. The Volt goes from 0 to 60 in about 10 seconds, and you can use an “L” drive mode that makes the 0-60 acceleration even worse. But the Volt drives almost exactly like the Lexus CT200h in that it has a sporty ride around corners, accelerates slowly, and is not intended for fast starts or for quick passing on a two-lane road. Make frequent jack-rabbit starts, or brake quickly (which means you have to accelerate again to propel the car instead of gliding over a longer distance) and you might lose a mile or two.

We noticed one small problem. On one of the test days, the temperature went below 32 degrees, and the gas engine kicked in for about half a mile. Chevy told us this is by design – it’s a way to keep the battery from getting too cold as you drive. In general, the cab does heat up quickly, as long as you remember to click the “comfort” setting for climate control and not leave the default fan-only mode on.

During the week of using the gas engine (we never charged the car), the MPG dipped to only 25MPG. On the plus side: the car heated up much faster. The tank on the 2012 Volt is surprisingly small: we could fit only about 8 gallons of gas into the tank. That means a range of only about 220 miles for gas.

Some of the things we noticed about the 2012 Volt, which apply to the 2011 model as well, came to light after the first week of testing. One is that the buttons on the center stack sometimes do not register correctly. You have to learn how to press them a bit more firmly than normal. We’d prefer at least a few mechanical buttons instead of so many electronic controls.

Looking behind you using the rear view mirror means a slight obstruction. The Volt has a crossbar below the main rear window that blocks part of the view. The trunk is higher than most cars because there’s a battery back there, of course. The back-up cam is handy because, like a more expensive luxury car, the Volt has sensors that warn from the direction of a possible collision that you should brake. The cam is crisp and easy to read, even on cold days, and shows lines to guide you into a parking spot.

Another issue with the Volt is that the interior gets fogged over quickly. We found we had to enable the front defroster almost at all times. To help with heating in the passenger area, we almost always had the seat warmers set to full (there are three levels) because we could then control the fan heat easier.

There are two knobs to the left of the driver: one for opening the EV charge door, and a second one for opening the gas engine fill door, which is much harder to find and almost seems hidden. One thing we never noticed during the 2011 Volt test: There’s a pedestrian alert horn located on the turn signal arm. It makes a rapid bleep sound instead of blaring the horn – it’s a more polite way of saying “get out of the way.” Another interesting feature: There’s a dash light that shows you if the rear passengers have buckled up. You can also enable a child-safety setting to keep kids from using the windows.

The 2012 Volt has all of the same options for seeing how “green” you are driving, dash displays that show whether you are using all electric power or the gas engine, and plenty of options to get feedback about how you are driving, your fuel economy, and your range. Some of the screens were tweaked from the original Volt version to show a bit more detail, such as a screen for seeing data about the most recent charge. Like the Lexus 200h, this data is useful for the alpha geeks who are used to getting a boatload of data about everything we do in order to make informed decisions.

Chevy has not updated the MyVolt.com site, which is a shame. You can view the charge status of the Volt, which is handy, and send commands to lock or unlock, start the engine, and set off the horn and lights as a way to find the car in a parking spot or if a dark figure is lurking around you. The options to see your driving history and your efficiency ratings are still “coming soon” though.

A related OnStar app for smartphones performs the same options as the MyVolt site, such as remote engine start, but also does not add any extra drive history. You can use the app or the site to send navigation data to the car, and the app adds a voice recognition system from Nuance so you can speak your address. This feature worked remarkably well and understood everything we said.

Overall, the Chevy Volt is an exceptional car. During the first all EV week of testing, we never visited a gas station and felt like the Volt was the best car ever made. During the second week, when we did not have to babysit the EV charger, we felt the Volt acted more like a Chevy Cruze with a smaller tank. All of the dashboard options can quickly lead to tech overload, but then they also provide a greater level of feedback than just about any other hybrid we’ve tested, including the Lexus 200h. In the end, the Volt has not matured much since the debut. The drive is the same, the dash controls have not changed much, and you can still only drive about 35 to 40 miles on a charge. Yet, it’s still a smarter buy than a pure EV because you still can’t find any charge stations – at least, unless you live in LA.