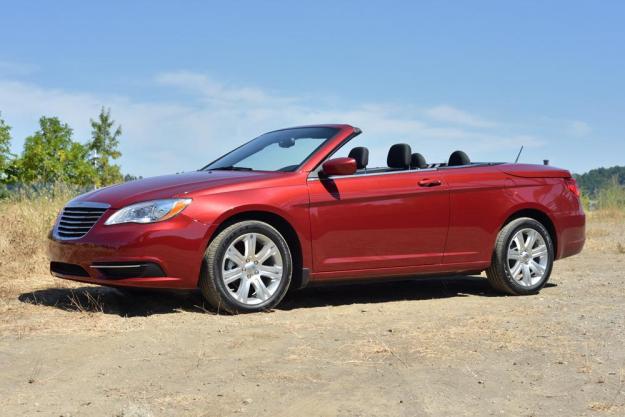 “The 2012 Chrysler 200 Touring is the sort of car we want to like, and in some ways we do. But it’s also the type of car that, while charming and likable as our hard-working office interns, is not one we want to spend any prolonged period of time with.”

Most of us (even those without a business degree) would agree that successful branding is a vital aspect to any company. Generally speaking, if you’re product is unappealing, you have two options: go back to the drawing board and invent something awesome, or just polish up that turd and give it a new name. Chrysler, in all its automotive wisdom, has taken a quasi-hybrid approach with its “new” 2012 200 Touring.

Why the overtly skeptical “new” disclaimer? Because, despite its rebadged numerical nomenclature, the Chrysler 200 isn’t exactly all-new. In many ways, it’s a clear-cut derivative of the now-discontinued Sebring, a vehicle that’s spent more time in a fleet that your average sailor. Rather than build an entirely new platform for its Sebring successor, the company has slightly restyled it and given it a shiny new sheetmetal suit.

Nevertheless, having (mostly) put the automotive recessions and bailouts in its rearview, the now Italian-owned automaker has emerged relatively unscathed since the dust settled on Detroit, thanks to an overall increase in vehicle quality, and a few smart and emotive marketing campaigns. Does that improved quality translate to the 200 Touring convertible? Let’s find out, shall we?

Haven’t we met before?

Despite its familiar design, the 2012 Chrysler 200 Touring convertible is not a hideous looking creature. It might not carry the visual cache that others in its segment possess, but it’s smartly styled for what it is. There is a calm, almost stoic, quality to the 200’s exterior styling, and it delivers an understated aesthetic that most will appreciate, but won’t be wowed by.

At its face, the Chrysler 200 sports a five-tiered, chrome front grille that crosses over into the hood of the car and houses Chrysler’s new winged logo. LED accents have been given to smooth out the front end’s presentation, while chrome detailing flanks the front air scoop’s pursed maw.

Around back, the shape of the taillights have been smoothed out and benefit from an injection of character thanks to the “C” shaped LED outline, while a chrome bar bridges both ends, with Chrysler’s logo once again featuring prominently at the center of the rear. Mopar dual-exhaust tips lend a degree of sportiness to the 200, which we came to appreciate. Still, the 200 does little to visually displace you from the reality that it is ostensibly a redesigned Sebring.

There is plenty to like about the 2012 Chrysler Touring convertible’s interior, assuming you don’t mind a more muted cabin. Seating up front is spacious, simple, and provides a great deal of comfort. The three-spoke steering wheel comes wrapped in leather. Here, the buttons for controlling the vehicle’s cruise control, side instrument menu — which sits just to the left of the gauge clusters — and Bluetooth voice commands are laid out in fairly straightforward fashion, while volume control is located right behind the steering wheel.

It’s certainly not the most luxurious or visually impressive cabin we’ve had the pleasure of stepping into, but what the Chrysler 200 lacks in style it manages to make up for in comfort. Up front there is plenty of space for driver and passenger alike, with an admirable amount of room afforded to passengers in the back. And for a convertible, the 200 Touring provides a decent amount of space in its trunk with the convertible top up or down.

Overall, the cabin won’t truly impress, but Chrysler has at least managed to add some life to the party with chrome accents on just about every aspect of the interior, from the shifter to the outline of the drink holders — even to the door handles, which helps inject some soul into an otherwise sterile cockpit.

We like to give credit where it’s due, and as we mentioned before, the 2012 Chrysler 200 Touring is a comfortable car. Standard creature comforts include keyless entry, heated mirrors, cruise control, air-conditioning, AM/FM radio, and a single-disc CD player with MP3 playback.

For the Touring convertible, Chrysler adds 17-inch alloy wheels to replace the standard steel variety, an upgraded transmission (more on that in a minute), automatic headlamps, automatic climate control, a leather-wrapped steering wheel and gear shifter, as well as a six-speaker sound system with satellite radio. Optional upgrades included in our review unit consisted of a Cold Weather Package with heated front seats, an excellent remote start system, and UConnect Voice Command, which adds Bluetooth for audio streaming and phone calls. But by far the greatest feature adorning the 200 Touring is its convertible top, which is made from cloth, takes about 30 seconds to fully open or shut, and is easily operated via a button located above the cup holders.

While the 200 Touring manages to come with a decent list of amenities, it isn’t crammed full of all the techy goodness we’ve come to love (and expect, really) from a modern automobile, which is widely disappointing. And of the tech-features it did include, the implementation seems more of a poor afterthought. For example, pairing our smartphone was simple enough and worked relatively well — but when using our iPod to listen to music via the remote USB port located under the center console, the 200’s processing power struggled under the weight of our exhaustive library. Granted, we have well above 80 gigs of music, but at this point in the game, reading these devices shouldn’t be difficult.

Adding to the 200 Touring’s tech drought is the absence of a navigation/infotainment system. This is even more intolerable when taking into account the vehicle’s base price, which starts at $26,575, well into the realm of being able to offer a decent system. To be fair, Chrysler does offer a touchscreen audio interface with DVD audio playback and digital music storage, but that is optional. The tech features, or lack thereof, in the 2012 Chrysler 200 is shameful. And when you take into account that our tester topped out at $30,070, but still doesn’t include those features — well, that simply doesn’t fly.

Two different powertrains are available on the 2012 Chrysler 200 Touring: a standard 2.4-liter four-cylinder that produces 173 horsepower and 166 pound-feet of torque, and an optional 3.6-liter Pentastar V6 mated to a six-speed automatic. Thankfully, our review unit consisted of the latter and was, much to our surprise, rather reactive. Acceleration is strong for the most part, but has difficulty getting up to speed at times. We attribute this to the fact that the 2012 Chrysler 200 Touring is a rather rubenesque ride, tipping the scales at 4600 pounds.

By and large the vehicle works best when sticking to simple task, like highway driving. From the outset we figured the Chrysler 200 for a decent road cruiser and we were right. Task the 200 with more arduous conditions and the hydraulic steering provides some depth and road feel, but generally falls flat. Simply put, the 2012 Chrysler 200 lacks the sort of road manners and sophistication we have come to expect from cars in its class.

Another disappointing characteristic rears its ugly head when you ask the 200 to accelerate out of corners at anything above moderate speeds. Here, the influx of torque causes the 200 to lose some stability and requires a firm grasp of the steering wheel to stay afloat. It doesn’t pose too much concern at first, but we imagine it could prove annoying, even dangerous, for some of the “honored citizens” we see populating this vehicle.

Surprisingly, fuel economy in the 200 Touring convertible isn’t as bad as we thought it would be given its weight and hefty engine. EPA-estimated fuel returns sit at 19 mpg in the city, 29 mpg on the highway, and 22 mpg combined. Naturally, fuel estimates on the non-convertible models will return slightly better numbers. Although, given that the best thing about the 200 is the available convertible top, we don’t recommend choosing the sedan model to save a few gallons (sorry, Mother Earth). Also, we’d like to add that while EPA-estimates can often prove meaningless, it seems to be pretty spot on with the 200 Touring, with our returns on par with, if not slightly below, the EPA’s.

In sum, the 2012 Chrysler 200 Touring is the sort of car we want to like, and in some ways we do. But it’s also the type of car that, while charming and likable as our hard-working office interns, is not one we want to spend any prolonged period of time with. Chrysler can and should be credited for improving upon the old Sebring with the 200 –the redesigned and upgraded interior is admittedly well done and does a lot to propel the vehicle forward quality-wise — but the automaker just hasn’t done enough to warrant a place for the 200 in your garage. Add to that an archaic, lacking list of tech features, and stiff, unresponsive handling, and the deck is just completely stacked against the 200. Not even its impressive fuel economy and throaty engine can rescue this one from its doldrums. Perhaps the only saving grace is its convertible top — but how many of us live in places where we can make use of it year round? Oh, that’s right, Florida, where we imagine a large majority of 200s will live out their days spinkled about many a Hertz lot. In the meantime, we’d rather wait for a complete design overhaul from Chrysler.