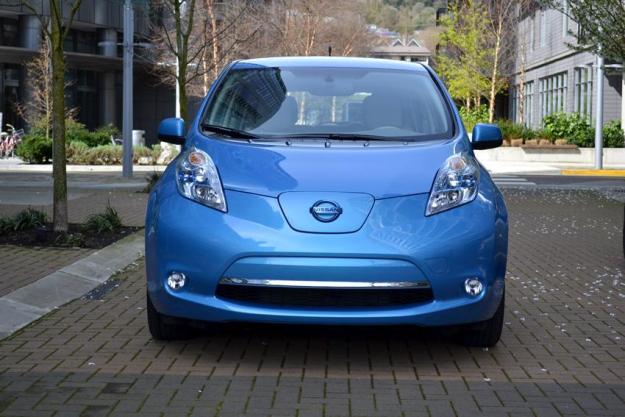 “You can’t deny that the Nissan Leaf is a cool car. Even if you don’t like the way it looks, the technology found inside is impressive to say the least. Nor can you fault Nissan for taking up the EV banner and providing the first real electric car for the masses.”

With the eyes of the automotive industry firmly placed upon it, the Nissan Leaf began rolling out of the company’s Japanese plants in December 2010. The zero-emissions all-electric car was met with critical acclaim, winning a number of awards upon its arrival including 2011 European Car of the Year and 2011 World Car of the Year. In its inaugural year, Nissan sold roughly 9,700 units in the United States alone, which is made all the more impressive given the fact that the Leaf was only available in select areas. But amid a growing crop of competitors including the Chevy Volt and soon-to-sprout Ford Fusion Electric, can the Leaf continue to tower above the rest?

Now in its sophomore year, the Leaf returns a little wiser and more refined. For 2012, Nissan has thrown in a few notable additions to the Leaf’s standard equipment, including the previously optional winter package, electric warming for the battery pack, heated front and rear seats, and heated steering wheel thrown in for good measure.

The SL model sees the addition of a DC quick-charging port as standard equipment, which allows drivers the ability to rapidly charge their battery back up to 80 percent in about 30 minutes – assuming you can find one, of course, as they can be pretty rare.

Sadly, those upgrades come at a price. One of the major roadblocks preventing electric cars from being embraced by the masses is the price of admission. While the 2012 Nissan Leaf remains one of the cheapest electric cars on the market — with a starting price of $35,200 for the base model and $37,250 for the SL – it still costs nearly twice what a comparable gasoline car would. Of course, that’s before you factor in various state and federal tax incentives, which can drop the price by as much as $7,500. There is even talk of bumping that figure up to $10,000 and shifting it to a point of sale deduction instead of a tax deduction. But until then, you’re gonna have to spend green to go green.

Stepping inside a Leaf for the first time can feel a little intimidating; even more so when you actually go to drive it. Thankfully, the car does a decent job of getting you acquainted pretty quickly. All the important information you’ll need to ensure you make it to your destination is there. As you might expect, the Leaf’s display gives off a very futuristic vibe. Inside is a digital wonderland filled with a sharply illuminated instrument panel, digital gauges, and a vivid LCD infotainment screen. In fact, sitting inside the Leaf you can’t help but shake the feeling that you’re about to drive a computer rather than a car, which is good, because there is definitely a wealth of information to be had while driving.

If you have a penchant for numbers, a la Dustin Hoffman in Rainman, the Leaf is for you. The car does a great job of supplying energy metrics via graphs to help illustrate how green your driving is. What’s more, everything is displayed in real time, so you can see if you’re currently driving in the most efficient manner, and alter your habits accordingly. Turn on that climate control and see your range drop, turn it off and see it bump back up. Most of the information you don’t really need, but it can prove useful, especially for mercurial types who want to squeeze every last mile out of their battery. The Leaf will even tell you the location of the nearest charging station if you’re in a pinch and need a boost of juice.

It might not look it from the outside, but the Leaf is actually quite spacious. Nissan says you can fit up to five people, but really four is pushing it. Funnily enough, despite all the Leaf’s digital bells and whistles, the interior is probably the most conventional part of the car. That it is, assuming you can forgive the mouse-like “electric shift control system” that would look more at home on a computer desk than in a car. While the material making up the car’s interior is not the most luxurious for a $35,000+ car, it never feels or looks cheap. Greenies will also appreciate the fact that it’s made from recycled material.

Of all the high-tech gadgetry found inside the Leaf, the digital feature we found most useful was actually outside: the Nissan Leaf iPhone app. With the app, you can monitor the car’s battery level, estimated charging times, and even turn on or off the climate control system before you get in. It essentially allows you to communicate with your car, and is a helpful way to manage most of its features. The app will even send you notifications via text message. So say, for example, your Leaf stops charging in the middle of the day or “accidently” gets unplugged by someone, like ours did (don’t ask) — you’ll at least be notified right away. The best part is that it’s all very user friendly, so those with even a modest grasp of today’s smartphones will find the Leaf app easy to navigate.

No gas, no problem

Like its predecessor, the 2012 Nissan Leaf forgoes gasoline altogether (it doesn’t even have an engine). Instead, the Leaf is driven by an 80-kilowatt (110-horsepower) electric motor that drives the car’s front wheels and is powered 24-kilowatt-hour lithium-ion battery pack located in the floorpan under the rear seat.

Nissan places the Leaf’s range at “up to 100 miles,” while the EPA rates it closer to 73 miles. Our time with the Leaf saw returns generally between those two figures, but that greatly depended on how and where we drove. City driving nets the greatest mileage, while highway driving will see range dip considerably. That can be offset to a degree with the Leaf’s range-boosting “eco mode,” which cuts the acceleration power of the car – Nissan says by only 10 percent, but it feels much higher — and kicks in the regenerative breaking system.

Performance-wise, driving the Leaf is truly a treat. The car handles surprisingly well given how tall and heavy it is. Our test route included more than a few windy back roads, and the Leaf took it all in stride. Although, the Leaf did have a tendency to roll more during sharper turns than we would have liked – it is a compact electric vehicle after all, not a racecar.

Speaking of racecars, the Leaf is definitely not meant to be driven like one. Sure, acceleration is quite responsive and zippy and you can reach speeds up to 90 mph, but we don’t recommend it. Driving that fast takes its toll on the battery and causes a huge hit to your overall range, which is why the Leaf is best driven around-town or used as a suburban commuter car. Put simply: Long distances and the Leaf do not get along.

Now that isn’t an affront on the Leaf’s overall range — which is actually more than adequate if you’re going to be driving it around the city or simply to and from work — but it’s something to take into account before you buy. Prior to getting behind the wheel of an electric car, we never really took much stock in all this talk of “range anxiety.” It sounds like some sort of anti-electric car rhetoric from people opposed to all things awesome, but after our time with the Leaf, we’ve come to realize just how legitimate a concern range anxiety can be, and just how vital it is to increase the amount of available public charging stations.

Driving a Leaf, or any EV for that matter, requires one to be more proactive about where and how you’re driving. To truly maximize range — and the car’s overall potential — driving habits may need to be slightly altered. Most won’t mind, some will. Leadfoot drivers, I’m talking about you.

Range anxiety doesn’t have to be a total dealbreaker, especially if you want to get in on all the electric action. For anyone seriously considering buying a Leaf, the best way to mitigate any fears over range is to install a level two 240-volt charging station in your garage. The whole installation process usually costs around $2,000, and by doing so you’ll be able to charge a virtually depleted battery in 7 to 10 hours. Otherwise, you’re looking at not-so-convenient charging times of up to 20 hours from a standard 120-volt outlet.

The Leaf’s looks have a way of polarizing opinions. To some, it’s a stylish, innovative looking glass into the future of the automobile. To others, well, it’s just plain ugly. The same effect carries over to the car as a whole.

You can’t deny that the Nissan Leaf is a cool car. Even if you don’t like the way it looks, the technology found inside is impressive to say the least. Nor can you fault Nissan for taking up the EV banner and providing the first real electric car for the masses.

Aside from its tech features and environmental merits, the single greatest thing the Leaf has going in its favor is that it requires no gasoline to run. Not a drop. With gas now over $4 a gallon, that alone will provide a compelling enough argument for some to take a drive down electric avenue.

Of course, the Nissan Leaf isn’t for everyone. While it will help save you money at the pump – by virtue of being able to bypass it altogether – a high cost of entry, partnered with a charging infrastructure that has yet to grow out of infancy can make recharging your battery a real headache.

Limitations aside, the Leaf is wonderful car that currently shows no signs of slowing down. Nissan took a huge gamble getting in early on electric cars, and so far it’s paying off. The Japanese automaker will begin manufacturing the 2013 model in its Smyrna, Tennessee plant and expects sales to double this year in the U.S. alone.

For those still on the fence, it’s important to remember that the Leaf is just the beginning. It’s already a great little car despite its prohibitive price, limited range, and not-quite-there-yet charging infrastructure. But if you’re already interested — and don’t mind putting in the time or money — what you’ll find here is a smart car for a smarter, greener future.

How much does it cost to charge an electric car?
The best EV charging apps help you find the right station for any electric car
Business upfront, 31-inch TV in the back. BMW’s electric i7 is a screening room on wheels
Best dash cam deals for November 2022: Vantrue, Garmin, Anker, and more
Nvidia’s Drive Concierge will fill your car with screens
The Uber hack is an outrageous tale of a teen hacking for fun
Tesla to fix window software on 1M of its U.S. cars
Lux and refreshingly livable, Mercedes’ EQE moves EVs mainstream
How to watch Tesla’s AI Day tonight and what to expect
2023 Audi Q4 E-Tron first drive: the predictable and traditional EV SUV we need
We need more 7-passenger EVs, but the 2023 Mercedes EQS SUV has room to improve
Tesla AI Day 2022: Optimus, self driving cars, and everything else announced
Tesla hopes full self-driving beta will be out globally by the end of 2022