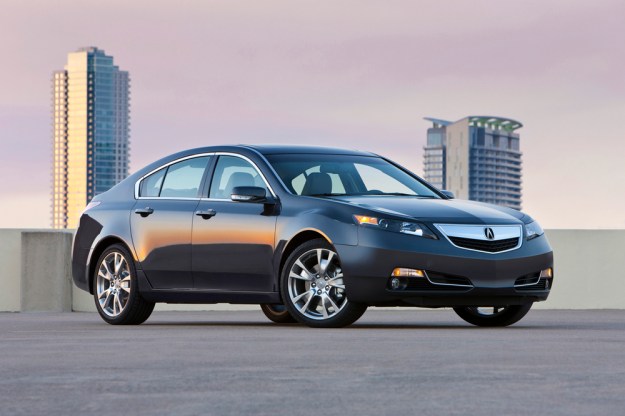 I haven’t been a huge fan of Acura’s design language as of late. In my opinion, it seems eccentric and does little to evoke any semblance of excitement. But beauty, as they say, is in the eye of the beholder — and sometimes you just need to know where to look to find it. The 2013 Acura TL isn’t the most attractive car I’ve come across, but thanks to its Super Handling All-Wheel Drive system, it features one of the most advanced drivetrains on the road today, helping it stand out in a sea of sedans. I recently had a chance to dive inside the TL and put its SH-AWD system through its paces and this is what I came away with.

Putting the “super” in SH-AWD

In truth, there are three types of luxury cars in this world: Those that champion luxury, those that champion performance, and those that manage to blend the two. The 2013 Acura TL falls into the last category, only the TL’s performance outshines its luxury component by a great deal. That’s not to say the TL is bereft of the sorts of luxury and sophistication buyers are searching for, only that the TL’s star shines brightest when performance is at the forefront of your driving desires.

The 2013 Acura TL is available in two different trims: The base model which starts at $36,000, and the top of the line SH-AWD model, which stands for Super Handling All-Wheel-Drive. The latter carries a sticker price of $39,000, and with its attention to agility and road-going athleticism, is the best bet for those seriously considering a TL. Both trims come standard with a six-speed automatic transmission and Sequential SportShift paddle shifters. Acura has even bestowed the TL with a sportier six-speed manual transmission, which is by far a better alternative to the hum-drum automatic and makes driving the 2013 TL a more engaging experience. If you don’t know how to drive a stick, now is the time to learn.

Unfamiliar with Acura’s SH-AWD? Allow us to explain. Like a standard all-wheel drive system, Acura’s SH-AWD is able to send power to both the front and back wheels. Where Acura’s system differs is its ability to direct power to individual wheels when needed. In front-wheel drive vehicles power is sent to the front-wheels (shocking!), while rear-wheel drive cars function in the opposite manner (no way!). All-wheel drive vehicles try and blend the best of both worlds by evenly distributing torque to both the front and rear wheels, while Acura’s SH-AWD takes it a step further by distributing torque (power) to individual wheels when necessary. While driving, the SH-AWD system continuously monitors and determines the optimal power distribution between the front and rear wheels by analyzing wheel speed, steering angle, lateral G-force, and yaw rate — all on the fly. This mathematical motoring wizardry is supplied by the vehicles’ Powertrain Control Module (PCM), which calculates current engine rpm, intake airflow, and transmission gear selection, while the TL’s Vehicle Stability Assist (VSA) provides wheel-speed data. Naturally, the greatest benefits mined from SH-AWD are felt during corners, where the system can actively vector (send) torque to a specific wheel, thus improving handling.

A helpful way to visualize it is to imagine the TL as a boat with four people manning oars in the front and rear. In typical all-wheel-drive setups, the power output of the oars (tires) is evenly distributed when cornering or driving in a straight line. However, if one oar is producing more power than the others it has the capability to turn the boat more effectively in that direction. It all sounds a little complex, and it is, but the great thing about the TL’s SH-AWD system is that you’re never aware that all these little things are working in your favor. It just goes and you reap the rewards.

During testing – and on a particularly spiteful stretch – the TL enters corners with power and poise. In similar conditions, most vehicles simply wouldn’t have the appropriate torque levels at the wheels to seem them through comfortably. A front-wheel setup may understeer, while and a rear-wheel setup might oversteer. Because of all the calculations whizzing through the TL’s PCM and VSA, the SH-AWD system was able to ensure the TL stayed planted to the road, with the onboard system directing 70 percent of the TL’s torque to the rear wheel, all of which can be channeled to the outermost wheel preventing the dreaded understeer and oversteer effect front-wheel drive/rear-wheel drive setups are notorious for.

The SH-AWD isn’t just handy in corners though, during linear acceleration the system can transfer up to 45 percent of the engine power (a 3.7-liter V6 good for 305 hp and 273 lb-ft of torque in this case) to the rear wheels, giving the vehicle better traction and greater haste off the line. If high school physics class taught me anything (other than that I’m not cut out to be a physicist)  it’s that it is always easier to push something than to pull it, which is one of the reasons sports sedans so often utilize a real-wheel setup. During testing, the Acura was able to barrel down a straight line with embarrassing ease, delivering a confident characteristic that appears more German in character, masking its fundamentally Japanese roots.

More than that though it’s an incredibly smart system that can adapt to a multitude of driving conditions in ways in which others struggle. Front-wheel drives get the best gas mileage, but they prove woeful when it comes to handling and performance. Rear-wheel drive vehicles provide greater handling, but they suffer under slick road conditions. All-wheel drive systems try and bridge the two, but they can be stiff, wooden, and as I’m about to point out, guzzle more gas than we’d like. Acura’s SH-AWD is an attempt at a more nuanced approach, one that tries to provide all the benefits and none of the drawbacks of the others.

Typically, vehicles outfitted with AWD tend to suffer when it comes to fuel economy, and the 2013 TL is no different. The SH-AWD system tries to account for this handicap by vectoring up to 90 percent of the vehicle’s power to the front wheels during steady, straight line driving, which in theory is ideal for highway cruising and improved fuel economy. The reality, however, is less impressive on the fuel economy front. And while it invariably helps, EPA figures place the 2013 TL SH-AWD at a modest 17 mpg in the city, 25 mpg on the highway, and 20 mpg combined when mated to a manual transmission. Opt for the automatic and those numbers increase by one across the board, which is nothing to write home about.

Anyone looking to experience first-hand the effects of modern technology on a drivetrain need only point Acura’s 2013 TL SH-AWD into a curve and accelerate; the effects of this one-of-a-kind AWD system are breathtaking. The rest of the car can be fairly described as hit or miss; a good sound system compromised by merely adequate navigation, almost no safety tech to speak of, and styling and appointments that leave plenty to be desired — particularly in the face of the category’s traditional powerhouses. But when it comes to performance tech, the TL goes toe-to-toe with anything coming out of Europe or the US. The technology might not hail from the planet Krypton, but the SH-AWD results in nothing short of super. Look hard enough, and you might even see a red cape flowing.