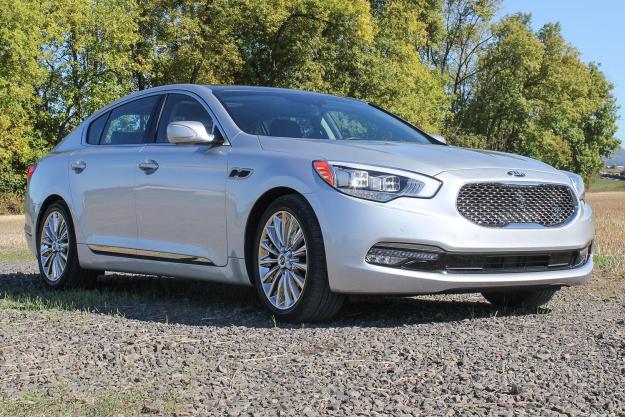 “Not many people will be willing to drop $66,000 on a Kia. But maybe they should, because the all-new K900 is a surprisingly impressive offering.”

What to make of the Kia K900? In a lot of ways it doesn’t make any sense. After all, it says “Kia” on the front … but it costs $66,000. The K900 nameplate makes it sound like some sort of robo-dog. It looks like an Optima that someone has pumped too much air into. It drives like a yacht. And in case anyone missed it … it’s a Kia that costs nearly $70,000.

Still there? Good. Because, despite its many mysteries and a few flaws, the big ol’ Kia is worth a second look. I am glad I gave it one; waiting for me was one of the most rewarding values in the luxury market – at least for the right person.

Wait, what am I looking at?

I first drove the K900 at its debut this spring and I came away with mixed feelings. It had its good points. However, I remained unconvinced that the Kia brand had come far enough to sell the K900, or that the car was good enough to rise above the marquee. The reality may be that the K900 may be a flop no matter what, but spending a week with it made me a believer.

The K900 may be a flop no matter what, but spending a week with it made me a believer.

It was when I was taking my wife out for her birthday, that I literally saw the light. Rolling up outside one of our favorite bars – don’t worry Kia I was the designated driver – when I saw the K900 reflected in the plate glass window. Thanks to the unique and frankly awesome lighting design, the K900 looked every bit the $70,000 luxury car.

At the center of the lighting design are unique rectangular LED headlights. Each lamp consists of two sets of four such LEDs mounted on stalks that can swivel with the wheels. During the day, these lights look great, especially up close. Seen at night, however, they are both impressively sinister and distinctive. Kia has pulled off a rare feat in the luxury world: a look that is neither derivative nor garish, but rather simply stunning.

That is a good thing, too. While the rest of the light design, from daytime running lights to tail lights is impressive, the overall styling is disappointing. The lines, and big rear shoulders tell onlookers that the K900 is a big rear drive executive sedan, but the design lacks any real refinement or character. Instead, the K900 winds up looking a bit too much like the Optima or Credenza Cadenza that has been overinflated.

It isn’t a bad looking car; when the lights aren’t shining out of its countenance, though, the K900 doesn’t quite look the part.

Thankfully, the same can’t be said of the interior, which is one of the nicest places to be in the automotive industry. Kia’s designers haven’t gone crazy, but they have built a modern luxurious interior complete with all the trimmings.

For starters the materials are all fantastic. The leather on the seats and trim is buttery smooth, and at least as good as anything from the Germans. The trim is replete with polished wood and satin finish aluminum, all set off by more fantastic lighting. At night the interior is lit with recessed red LEDs that are bright enough so that occupants can see without destroying the driver’s night vision.

What these lights illuminate is one of the best thought out interiors of any luxury car I have driven. The seats are enormous, supremely comfortable and well positioned. The driver’s massive recliner gives even petite operators easy access to all the controls, including Kia’s UVO infotainment system.

Kia has opted for an Audi style command wheel precisely to keep all of the controls within easy reach. Typically, I prefer touchscreens to this style of control, but the Kia system is well executed and simple to learn. After driving for no more than a day, I was able to navigate easily through the system without taking my eyes off the road.

Keeping my eyes on the road was made easier by one of the K900’s best features: its heads up display. More and more cars are starting to feature these systems. Many, though, feel poorly thought out or poorly integrated. The K900’s display is simple, but communicates all the key information, including speed, navigation directions, cruise control and blind-spot monitoring with eye catching and easy to read graphics.

During my week with the K900, I wound up chauffeuring a fair number of friends. These friends are jaded enough that they rarely seem to notice or care what I am driving. But sitting in the cavernous back seat of the K900, they reverted to a state of child-like glee, pressing buttons and exclaiming over the literally dozens of features at their fingertips.

While big Germans sedans have long included things like cooled, reclining seats, and privacy screens, they are the sorts of options that buyers normally have to drop more $100,000 to get. On the K900, however, they are standard.

It’s off to sea we go

The Germans may happily gouge customers on options, but even their biggest, heaviest sedans can move like ballet dancers. Not so the K900.

The K900 may not have the sporting verve I would like, but driving it has a sense of drama.

On paper it checks all the boxes, the rear wheels are driven by a silky smooth 5.0-liter 420 horsepower V8, and unlike its corporate stablemate, the Hyundai Equus, the K900 gets a real suspension, not airbags. However, despite these things, the K900 is a luxury car of the old school … the Cadillac and Lincoln school.

The first and most obvious sign of this old-school luxury feel is the steering, which is feather-light. In a world where most big sedans feature heavy, sporty steering, the K900’s wheel is cotton candy soft.

The suspension too appears to be made largely of clouds and rainbows. It can absorb even the worst roads that I could throw at it. And, where I live, that is saying something. In hard cornering, however, I felt a bit as though I was piloting a dreadnaught riding on top of a zeppelin.

Before anyone takes that the wrong way, I have to say I am actually more or less fine with this sensation. The K900 is meant to be a big comfortable cruiser, and it does this very well. The ride is superbly comfortable and the world goes by in tomb-like silence. It can even be made to go by quite quickly, thanks to that big and powerful V8. Mated to an incredibly slick eight-speed automatic, there is always a ton of power on tap – more than enough to drive the massive car to 60 mph in the mid-to-low-five-second range.

So while the K900 might drive like a boat, it is an extremely nice and luxurious boat. It also has something that many of the similarly priced but smaller German and Japanese sedans lack: a personality.

The Audi A6 or the Lexus GS are great cars that are in some ways technically superior to the K900. If nothing else they certainly have more brand credibility than the big Kia. But the K900 is a more interesting choice. For starters, there won’t be many of them. I would be shocked if sales exceed a few thousand a year, which will make driving the K900 an exclusive experience – like that of a Rolls-Royce.

It is also a more lovable car than most of the entries from the major luxury player. German and Japanese luxury cars are often antiseptic and frankly a bit dull. The K900 may not have the sporting verve I would like, but driving it has a sense of drama.

What’s more, its old-school luxury car attributes stands out in the marketplace. While it isn’t for everyone, the big Korean’s focus on comfortable driving makes sense. In a car the size of the Queen Mary, the point isn’t to hammer through country roads like a madman. It’s to sit back and relax, while only occasionally using all 420 horsepower to blow a slow peasant in their Camry out of the water.