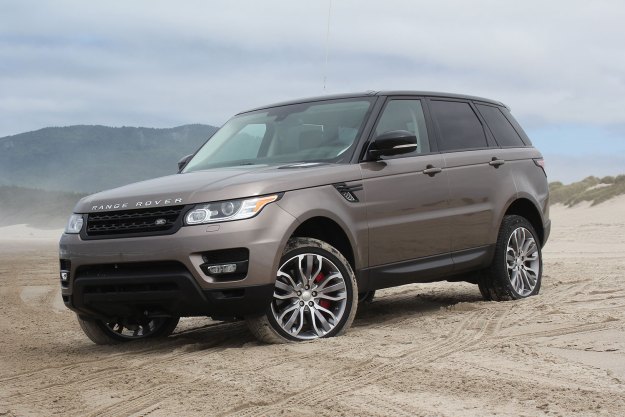 “The supercharged Range Rover Sport is one of the top dogs in the fight for sport SUV superiority, with stunning sports-car handling and staggering off-road capabilities.”

“Well, now we’re in trouble,” I thought as the Range Rover Sport slid backwards down a sand dune, inconveniently littered with pine trees. It looked like the kind folks at Land Rover had made a terrible mistake sending me out to the dunes of Sand Lake, Oregon.

Even their thoughtful inclusion of a hardened, off-road driving instructor was not enough to get us out of the predicament — this expert’s best efforts to un-beach the car from where I had gotten it stuck were of no avail. We stepped out of the vehicle to find the Sport buried to its skid plates in sand, perilously close to sliding its flawless paint into a tree. I thought that I had finally found something this heretofore impeccable vehicle couldn’t do.

I won’t leave you in suspense: We didn’t die of starvation in the sand, and we weren’t eaten by marauding ATV riders (in fact some stopped to help). That is because, despite the grim situation, I was very wrong about the Range Rover Sport — it can do anything.

It took some digging and airing down of the conspicuously out of place street performance tires, but in a surprisingly short amount of time, the Sport and its insane 510-horsepower powerplant were soon howling up the 30-degree slope with a vengeance. This experience was simply a repeat of my entire week with the Range Rover Sport: Every time I thought I had finally showed it up, it struck back.

The supercharged V8 lurking beneath the Range Rover’s hood howls like a T.rex on meth.

On the sand, that meant I found myself doing massive powerslides in a $90,000 luxury SUV that most customers will use to get from the local Whole Foods to soccer practice. The sensation of looking back and seeing a massive, 50-foot long rooster tail of sand — and an army of stunned onlookers — was enough to leave me giddy. And that was before I even mention the noise.

The 5.0-liter supercharged V8 lurking beneath the Range Rover’s hood howls like a T.rex on meth. Slapping down the throttle out on the sand creates a choking torrent of noise so loud that the world seems to be coming to an end.

It isn’t all powerslides and high-speed shenanigans, either. Despite the eventual mess I would get the car in, the Sport has the ability to master just about any terrain. The driver interacts with the off-roading tech through the Terrain Response system, a knob that rises out of the center console. This can be set to specific types of terrain such as mud, snow, or sand, each depicted with its own inscrutable pictogram. The lazy and incompetent (such as yours truly) can always leave the system in auto, allowing the onboard systems to dictate settings for the diff, traction control, and suspension.

The result of this system is that there are very few circumstances in which the Range Rover Sport can’t move its wheels. The limiting factors are tires and skill. My press demonstrator was fitted with Continentals that were excellent for the on-road performance, but struggled in sand. I found this out when I ground to a halt and then began back sliding on a steep dune. I got the Rover Sport stopped and switched places with the Land Rover instructor, only to find that we couldn’t move forward — and backwards was going to be dicey. In the end, we found ourselves buried to the axles in sand, with the tail end of the rig perilously close to a drop off and a very hard looking tree.

I was convinced we were in for it then, and in most vehicles we would have been. But in fact, once we dug away some sand with the help of a few friendly ATV riders and aired the tires down to the point they were resting on their sidewalls, the mighty Range Rover roared away up the slope.

This was an impressive feat, but where the mighty Sport truly surprises is on the road.

Reading the Range Rover Sport’s stat sheet, you could be forgiven for thinking that you were looking at a sports car. Between its 510 horsepower, 4.6-second 0 to 60 sprint, and 13-second quarter mile, the confusion is genuine.

More impressively, the confusion continues when you get behind the wheel. Toddling around town, you might notice the power and the nimble steering, but show the Sport some open road and it will embarrass the odd Porsche. The brutal acceleration is the most obvious quality, but anyone can cram power into a large truck body. The Range Rover Sport seemingly defies physics, shedding its bulk in corners while maintaining a ferocious grip on the pavement, despite a relatively soft ride.

The steering and braking in particular deserve credit. There are several sports sedans that, despite weighing nearly a ton less, don’t have the same crisp turn in or road feel. In fact, once I got my head around the fact that 5,464 pound Sport wasn’t about to tip over, I was able to throw it around at remarkable speeds. I find it very easy to believe that the Range Rover Sport managed an 8:30 lap time on the Nurburgring.

Even with all this on- and off-road performance, the Range Rover Sport doesn’t sacrifice style or comfort. The minimalist and hyper modern exterior styling is mimicked on the inside by a clean, spare interior.

Highland Universal Pet Barrier ($30)
Keep Fido, and his muddy paws off of the seats without having to resort to the Romney solution.

Cobra Radar Detector ($165)
With all that extra power this may come in handy, so long as it is legal in your area.

The materials are all high quality and high class with acres of leather, wood, and polished aluminum. Where other luxury interiors using the same materials would be garish or showy, the Range Rover designers have clearly gone for a “high-tech coffee bar” look. The dash and center console aren’t overburdened with buttons and controls; everywhere from the door panels to the seats themselves use clean simple lines. It’s a good look, as it takes a little of the new money gaucheness out of the luxury SUV ownership.

That being said, there are still plenty of gizmos to play with if you want. For instance, the Meridian stereo is capable of bending steel beams, not to mention the fabric of space-time, with the unbelievable bass wattage it kicks out. Once your eardrums have recovered from the sonic onslaught, you can bring up a series of clever off-roading displays on the infotainment system. These show the angle of the vehicle and what the all-wheel drive system is doing at any given moment. It’s not necessary by any means, but it’s exactly the sort of toy that makes drivers feel a just a bit special.

In the end, it’s pretty hard to find fault with a vehicle that looks great, goes fast, and can tackle tough terrain (even when its driver can’t). All of this excellence does come at a cost, specifically a price tag of more than $90,000. Not only is that a lot of money, but it also puts the Sport in competition with not just performance focused SUVs but its own big brother: the Range Rover.

That’s tough company, and while the Range Rover Sport may not quite manage the presence of the bigger Range Rover or the sports car precision of the Porsche Cayenne, it does manage to be a better compromise than either one. If money is not an issue and you want something that’s at home in mud, on a track, or outside the nicest restaurant in town, the Range Rover Sport will do just fine.

The best SUVs for families