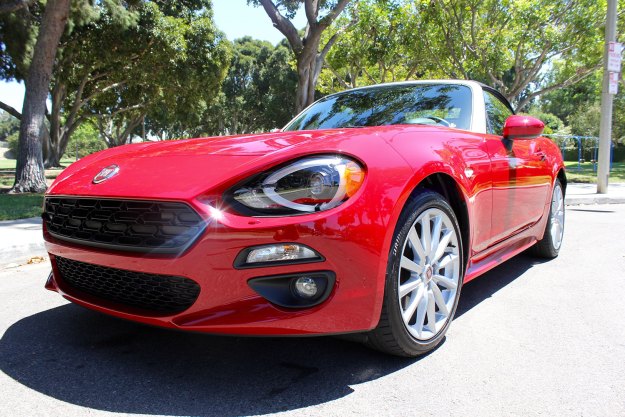 This year marks the 50th anniversary of the Fiat 124 Spider. Although the car has been out of production for more than three decades, Fiat roadster fans have cause for celebration because the Spider returning to the global market this summer as a 2017 model. Despite the fact that the car now carrying the torch bears little mechanical resemblance to the roadster it derives its namesake from, it’s no less compelling than the original, which has the notable distinction of being the best-selling U.S. market Fiat ever.

If something looks strangely familiar about the shape and proportions of the Fiat 124 Spider, it may be because this car owes just as much to Japan as it does to Italy. The result of an engineering partnership between Fiat and Mazda, the 124 Spider is built alongside the MX-5 in Hiroshima, and much like the Subaru BRZ and Scion FR-S, the Mazda and Fiat share a platform. But unlike Toyobaru twins, the differences here run deeper than just badging, content and minor tuning tweaks.

But can a sports car with the underpinnings of a Miata capture the essence of that iconic Italian ragtop? With 350 miles between Los Angeles and Pebble Beach, a balmy summer day taking shape, and no shortage of narrow, twisting tarmac at my disposal once I arrived in town for Monterey Car Week, I intended to find out.

While there’s a number of nuanced differences between the Mazda MX-5 and the Fiat 124 Spider, the most obvious difference between the pair, from a mechanical standpoint, is that the Fiat does not use Mazda’s naturally aspirated 2.0-liter SkyActiv four cylinder motor. Instead, Fiat has festooned their turbocharged 1.4-liter MultiAir four-pot into the chassis.

The boosted mill outputs 160 horsepower and 184 pound-feet of torque in the Classica and Lusso trims, while the performance-focused Abarth model gets a unique exhaust system that bumps peak horsepower up to 164. Comparing the 124 Spider Abarth and its Japanese equivalent in MX-5 Club, that’s a difference of nine horsepower and 36 pound-feet of torque. It also means the 124 Spider is the most powerful four cylinder currently available in its class. Considering the fact that Mazda has stated their intention to leave engine output as-is with this generation of the Miata, opting for the 124 may be the easiest path to a more grunt if you find the MX-5 a bit lacking.

If something looks strangely familiar about the Fiat 124 Spider, it may be because this car owes just as much to Japan as it does to Italy.

But the Fiat 124 Spider’s differentiation from the Mazda MX-5 doesn’t simply begin and end at the power plant. Fiat wanted to give this roadster its own character without losing sight of what’s made the Miata a venerable modern-day sports car icon. Every body panel on the 124 Spider is unique to this model, with the design handled at Fiat’s Centro Stile division in Turin, Italy. While similarities in the proportions of the two cars are unavoidable, the Fiat cuts a decidedly more chiseled figure than the smooth, flowing design of the Mazda, and the 124 Spider’s prominent bug-eye-style headlamps and split grille help give the Fiat a unique visual identity.

Along with suspension tuning that’s more aggressive than the MX-5’s across the lineup, there’s also numerous soft-touch leather options exclusive to the 124 in order to provide the interior with a sense of European flare as well. A bespoke gauge cluster and Sport mode are also on hand for the Abarth model.

While there are efforts to establish a unique identity for the 124 Spider found throughout the car, from behind the wheel none are more obvious than the engine under the hood. The Multi-Air’s personality is a bit more raucous than the relatively understated nature of the naturally aspirated 2.0-liter in the Mazda. Along with its raspy exhaust note – which is particularly prominent in the Abarth model – how the Italian mill delivers the power is substantially different from Mazda’s SkyActiv power plant.

Because of the Mutli-Air’s heavy reliance on boost to make power, below 3,000 rpm the motor can feel a bit lethargic, and unsuccessful attempts to get underway from second gear in stop and go traffic during the mania of Monterey Car Week in my manual gearbox-equipped tester drove this notion home. Yet if you’re willing to play by the turbocharged rules, this little car can be a legitimate riot to bomb around in, and its curb weight of under 2500 pounds is a refreshing change of pace from the industry-wide bloat we’ve become accustomed to.

When it goes on sale this summer, the 124 Spider will initially be offered in three trim levels – Classica serves as the entry level offering, while Lusso offers more luxury and tech content and the Abarth model caters to enthusiasts with its focus on performance.

If you’re willing to play by the turbocharged rules, this little car can be a legitimate riot to bomb around in.

Like the Miata, the 124 Spider’s size might seem like a daunting proposition to taller drivers. While it normally wouldn’t be my go-to choice for grand touring duty, my 6’3” frame settled into the 124 comfortably for the five hour drive to Monterey. Although adjustment on the 124’s seats is fairly rudimentary, the overall comfort of these buckets – which differ in construction from the MX-5’s – was admirable considering the lengthy stints behind the wheel.

I also got to know the infotainment system well during our journey together, which is essentially unchanged from Mazda’s implementation in the Miata. Although it lacks some of the latest features like Apple CarPlay and Android Auto, the system proved cooperative with my devices and responsive to commands, with a logically laid out and easy to navigate menu system. Inputs can be done either by touchscreen or an iDrive-like pivoting rotary knob and a collection of physical buttons, while basic tasks like volume control, skipping tracks and voice commands can also be done from the steering wheel.

The Fiat 124 Spider gets stiffer suspension tuning than the Mazda across its three trim lines, but it’s unsurprising to learn that the Abarth’s tuning is the most aggressive among them. Serving as a counterpart to the performance-focused MX-5 Club, the Abarth gets Bilstein dampers, bigger wheels with grippier tires, a throatier exhaust system, and the availability of Brembo brakes and Recaro sport seats.

To help drive home the on-track prowess of the Fiat 124 Spider Abarth, Fiat has partnered up with the Bondurant Racing School in Chandler, Arizona, to provide expert performance driving instruction to every new Abarth buyer. Not unlike the SRT Experience offered on high performance Dodge products, Abarth owners will be treated to a day at the purpose built facility learning various high performance driving techniques from Bondurant’s roster of highly skilled instructors, many of which are former professional racers like Bob Bondurant himself. That’s a particularly nice little perk when you consider that even the top-spec Abarth comes in under $30k.

If this has you torn between the MX-5 Club and the 124 Spider Abarth, I can’t say I blame you. Straight-line acceleration is essentially identical between the two cars at about six seconds flat to 60 mph, and while the Abarth undercuts the Club’s price by a few hundred bucks at $28,195, the difference becomes even more negligible when you start considering options like the Brembos and the Recaro seats. Still, the Abarth’s 1.4-liter turbo engine likely provides a bit more performance potential out of the box, yet lacks the linearity of the Mazda’s natural aspiration.

At the end of the day, choosing between a Fiat 124 Spider and a Mazda MX-5 is a subjective exercise – both cars are a blast behind the wheel and offer a genuine performance value along with a surprisingly amount of practicality. Although each cuts a substantially different figure aesthetically, which one is more appealing to the eye comes down to who you ask.

Perhaps the most reassuring takeaway here is that you can’t really go wrong with either one. Whether or not the Fiat suits you more ideally than the Mazda does, the notion of more of these light weight and well-balanced chassis finding their way into production – regardless of the badge on the hood – is a great thing indeed.