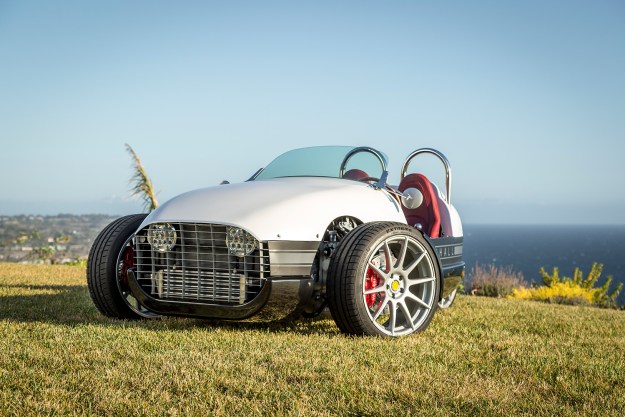 “Loud, quick, yet elegant, the Vanderhall Venice is an affordable nod toward motoring excitement.”

Let’s cut to the chase: The Vanderhall Venice is the three-wheeled vehicle you didn’t know you wanted. On a recent trip to Los Angeles, I was lucky enough to spend a day reviewing the latest model from Vanderhall Motor Works. I knew I loved it within the first 10 minutes—and I hadn’t even left the suburbs yet.

Founded in 2010, the Provo, Utah-based company adheres to the tagline “The Road is Calling,” and its vehicles—the all-new Vanderhall Venice and previously released Laguna—are transparent throwbacks to an era when driving wasn’t a chore and vehicles weren’t appliances to complete one. And thanks to its open-air cockpit, you will literally experience the road with your five senses, each one heightened with every rev, turn, and wide-open throttle.

The Laguna, which debuted in 2016, is a premium roadster. Not only priced as such (starting at $58,850 MSRP), the vehicle also takes a painstaking 800 hours to build with a current wait time of up to six months for every new order. By contrast, the more value-oriented Venice starts at $29,950, is built on the same platform, features the same powertrain, and offers similar equipment as its higher-priced sibling.

Hand-built by the same 35-member team, both models sit on the same mono-aluminum chassis. Their most notable difference, however, is on the exterior. The Venice utilizes a composite body which takes no more than five hours to build, while the Laguna features a carbon fiber body that is laid by hand.

Designed, developed, and manufactured in Utah, a vast majority of Venice components are American-made, either in-house or by vendor partners. One exception, for example, is the aluminum-forged wheels which are currently sourced from a Chinese manufacturer.

A mono-trim model, the Venice features a General Motors-derived drivetrain consisting of a 1.4-liter, turbocharged four-cylinder Ecotec engine paired with a six-speed transmission. Its powder-coated aluminum shifter lives between the seats and shifts in a park-neutral-reverse-drive sequence.

Designed, developed, and manufactured in Utah, a vast majority of Venice components are American-made.

A sequential-shift manual transmission is available as a $995 option and uses a separate chrome bump-shift lever located on the driver’s side body rail. Interestingly, the chrome shifter and body rails did not attract heat and were never hot to the touch, even though the vehicle spent most of its time in the sun.

Exterior features include automatic all-LED lighting and black details to the grille, headlights, and brake calipers. Apart from their odd arrangement, there’s nothing particularly remarkable about the Venice’s wheels. All three ride on 18-inch car-like rims, shod with ultra-high-performance summer tires.

There is something appealing about the bare-bones presentation of the Venice. With the abundance of technology in vehicles today, from the seemingly necessary (i.e., rearview cameras, blind spot monitors) to the nagging nannies (i.e., anything with a mandatory high-pitched beep), having no touchscreen and no warning lights was as refreshing as Malibu’s seaside air.

Still, what tech it did have we wished worked a bit better.

Take the sound system which consisted of two exposed speakers. The sound quality, while good, seemed unbalanced with their loudness somewhat skewed toward the driver. Maybe it was just the way the music was downloaded onto my phone, but the sound level was noticeably lopsided when I moved from one seat to the other. Still, even at highway speeds, the music permeated through whooshing winds fairly well… at least when my knee wasn’t blocking the speaker.

Both my passenger and I – who differ in height by at least a foot – kept finding our knees resting against the open speakers. Not only did this muffle the sound but we also worried about causing damage to the exposed parts. A traditional cover would likely fix the issue and add almost no additional weight.

As for other tech, the Bluetooth system was easy to connect to and the heated seats functioned as designed once the Southern California sun set into a cooler than expected night. Nightfall presented another irritant, however.

The lit gauges reflected directly onto the windshield to the point of distraction. Although taller drivers can simply look over the windshield to minimize the meters’ glare, shorter passengers like me have no choice but to view it straight on. Using my arm to create a shield over the dash immediately blocked the reflecting light so perhaps a small covering, even as an option, could be offered. I’d hate to relegate the Venice to only daytime excursions.

Limited to the confines of two seats and driving-related equipment like a shifter and steering wheel, there isn’t much room for error — or much room at all, to be honest. Two above-average sized adults would be hard-pressed to find elbow room within the interior of the Venice. Although no roof means taller occupants enjoy unlimited headroom, those sporting broad shoulders will find themselves in snug quarters.

Although the interior is minimalistic, the stock leatherette seats remained comfortable after a daylong drive, and I suffered zero arm fatigue with the slender, three-spoke steering wheel. On its own, the wood steering wheel was an artful contrast against the heavy black-and-aluminum interior. In general, the fit and finish was excellent as nothing appeared to be poorly made or cheaply assembled, and rattles were relatively absent.

One glaring omission, though, is a cup holder. There are none, unless you’re lucky enough to know someone unopposed to ever-tousled strands as they hold your seasonal beverage of choice. Okay, cup holders will be available as a future option to join the current list of extras that includes a Brembo brake kit, luggage rack, different upholstery materials, and varying chrome accessories. Still, this is one of the most basic of amenities, no?

Cargo space is expectantly meager, but another notable nonexistent feature is lockable storage. There’s a recessed area behind the seats that can hold, say, a few takeout containers, but bring anything beyond a large purse (murse?) and you’re out of luck. Backpacks, suitcases, and the like will be relegated to the front seat area. Good-bye, PSL-holding friend.

So, what makes us so sure the sole emphasis of the Vanderhall Venice is motoring enjoyment? Because it growls deliriously like a rabid beast as it scampers from 0 to 60 mph in 4.5 seconds. Not only does the market’s newest three-wheeler out-power the competition, its 1,375-pound dry weight barely tips the scales. And your math is correct. Its power-to-weight ratio is kinda bonkers. Oh, right. And it’s front-wheel drive. See? Bonkers.

Its power-to-weight ratio is kinda bonkers.

With a weight distribution ratio of 70:30, the Venice is surprisingly stable and with minimal torque steer. Taking the numerous winding canyon roads connecting the San Fernando Valley and Malibu, the vehicle was extremely planted, exhibiting no body roll thanks to its rather low 4.5-inch ground clearance. The steering was tight, though with a 60-inch front track, I found myself understeering as I mistook the vehicle’s prowess for a regular car. Instead, I should’ve been doing the opposite to compensate for its galaxy-sweeping cornering.

Without question, the Venice is an absolute hoot to drive, but its wide track and subsequent 39-foot turning circle make the everyday three-point turn an elusive achievement. While the pushed-out tires do win style points, frankly, the Venice turns with the finesse of a semi-truck.

There are no EPA estimates available regarding fuel economy, but even with my rather exuberant driving in a mixture of speeds, elevations, and traffic patterns, I averaged about 33 mpg. And, like its counterparts, the Venice prefers only the finest of premium octanes filling its nine-gallon fuel tank.

According to NHTSA, a motorcycle is any motor vehicle “designed to travel on not more than three wheels in contact with the surface.” By this standard, the Venice is considered a three-wheel motorcycle and does not undergo the same crash testing of automobiles — nor is it required to offer safety features such as airbags.

License and registration requirements vary by state, however, and to further confuse the matter, such vehicles are classified by different designations. For example, in the state of New York (where one Digital Trends editorial office resides), the Venice is considered a motorcycle and one is required to have both a motorcycle license and wear a helmet during operation. In neighboring New Jersey, the Venice is listed as an “autocycle” and only a driver’s license is required while helmets are optional.  California observes the same rule as New Jersey but lists the Venice as a three-wheel motorcycle.

The reasoning relates to whether there is a steering wheel, seat belts, and roll bars. In the case of vehicles like the Can-Am Spyder, a motorcycle endorsement would be required due to it lacking all of the above. Nevertheless, the Venice features ABS, brake assist, steering assist, and traction control as standard safety equipment.

My time with the Vanderhall Venice was genuinely one of the most fun I’ve ever had behind a wheel. Not just head-turning quick, its design is akin to a bygone era. While other models try to razzle-dazzle with character lines reminiscent of Batman’s over-the-top Tumbler, the Venice employs elegant simplicity. Its attractive profile had anyone from grade school boys to middle-aged women gasping “Wow!” There were plenty nods of approval as well from motorists and pedestrians alike.

Many still have a passion for the sheer joy of driving or riding, but thanks to modern technology—whether due to regulatory requirements or industry FOMO reactions—vehicles are becoming less about freedom and more about meeting standards, real or perceived. The Vanderhall Venice, with its affordable no-frills approach, is genuinely focused on offering an experience, as if urging, “Yes, we can have nice things.” And who am I to argue with that?