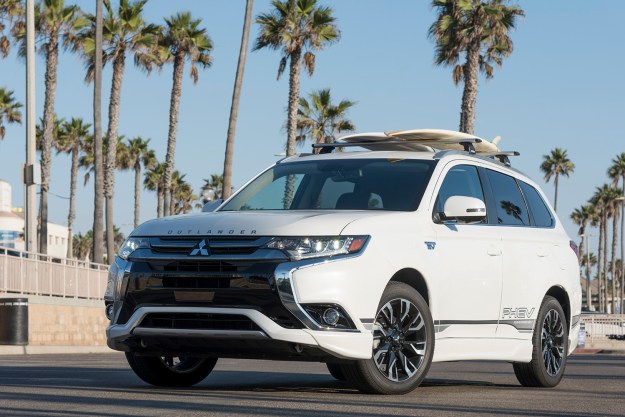 “The Outlander PHEV lets buyers have it all -- with some compromises.”

Catalina Island is an improbable place to hold a test drive event. Located just off the California coast, the island is run by a conservancy that restricts car ownership—there’s currently a 15-year waiting list to bring a car to the island. Not that there are many places to drive, as most of Catalina is wilderness. But the unlikely location was a perfect match for what is a most unlikely vehicle: the 2018 Mitsubishi Outlander PHEV.

The PHEV is a plug-in hybrid version of the Outlander, Mitsubishi’s answer to compact crossovers like the Honda CR-V, Subaru Forester, and Toyota RAV4. It’s the only plug-in hybrid crossover that isn’t a luxury model. Starting under $40,000, the Mitsubishi significantly undercuts the next-cheapest plug-in hybrid crossover, the $63,200 BMW X5 xDrive40e iPerformance. That puts the Outlander PHEV in a category of one, and it was almost a category of none. While the Outlander PHEV has been available in Europe and Japan for several years, Mitsubishi delayed the U.S. launch multiple times. After so long, we were eager to get behind the wheel to see if this plug-in hybrid was worth the wait; read our first drive review to find out.

The Outlander PHEV is a new variant of the current-generation Mitsubishi Outlander, which was introduced as a 2014 model and received a significant update for the 2016 model year. The PHEV version has been on sale in Europe and Japan for several years, but it’s only just now coming to the United States, hitting showrooms in December.

The Outlander PHEV is available in two trim levels that largely match those of the gasoline Outlander. Starting at $35,535 (including a mandatory $940 destination charge), the Outlander PHEV SEL offers the same standard equipment as the gasoline SEL, including: leather seats, a power liftgate, roof rails, automatic headlights, power-folding exterior mirrors, and an auto-dimming rearview mirror with Homelink.

Both trim levels also include some PHEV-specific features that aren’t available on their gasoline-only counterparts. These include model-specific leather seating surfaces, interior accents and wheel designs, power passenger seat, a 1,500-watt AC power inverter that draws power from the battery pack for electronic devices, DC fast charging, and a Wi-Fi link that lets owners control certain vehicle functions through a smartphone app.

Small changes—such as a gloss black front fascia and different wheels—differentiate plug-in hybrid models from their gasoline-only siblings. The Outlander is a fairly handsome, if conservatively styled vehicle. There really isn’t much that stands out beyond the in-your-face front-end treatment, complete with tusk-like chrome trim pieces. We did get a few looks on the streets of Avalon on Catalina Island, but likely because our Outlander was one of only a handful of full-size cars in a town where golf carts are the primary means of transportation.

The Outlander PHEV doesn’t excel in traditional areas of tech like infotainment, but it offers some features few other vehicles can match.

The PHEV-specific electronic shifter is as unpleasant to look at as it is to use.

The 7.0-inch touchscreen infotainment system doesn’t offer any standout features, although with standard Apple CarPlay and Android Auto it will likely cover all of the bases for most buyers. Using those features requires plugging your phone into an awkwardly placed USB port in the center console, however. Mitsubishi does not offer a built-in navigation system on the Outlander PHEV, so your phone is the only option for directions. The optional Rockford Fosgate audio system in our test car had fairly good sound quality for this price range.

Most of the included tech features focus on getting the most out of the Outlander PHEV’s plug-in hybrid powertrain. Like other automakers, Mitsubishi has a smartphone app that lets owners control certain vehicle features. The Outlander PHEV sports a dedicated Wi-Fi connection to ensure that it always works. Owners can use the app to start or stop charging, remotely activate the climate control, see how much charge the battery pack has, and check if the doors are open or the headlights are on.

That battery pack can also be used for more than just propelling the car. Two AC outlets (one by the rear seats, one in the cargo area) can draw power from the pack to run electronic devices, tools, or portable appliances. The entire system can produce 1,500 watts of power. On our test drive, Mitsubishi demonstrated one possible use by hooking up a blender for some beachside smoothies.

Mitsubishi said the interior materials used in the PHEV model are a “level up” from the standard Outlander, but we still found interior quality … lacking. Most of the interior is a sea of drab plastic shapes, and Mitsubishi chose a strange looking glossy black material for much of the trim that looks like it will smudge or scratch easily. To top it off, the PHEV-specific electronic shifter is as unpleasant to look at as it is to use.

It’s not all bad, though. The leather seats are comfortable, with plenty of legroom in the rear and a good driving position in the front. The Outlander’s boxy shape also gives the interior an airy feeling, and outward visibility is very good. Mitsubishi claims the battery pack—which is mounted under the floor—does not impact passenger or cargo space.

Figuring out the array of buttons that control the various drive modes and all-wheel drive settings is also fairly easy, and Mitsubishi doesn’t force the driver to rely completely on the touchscreen for audio and climate controls.

Our test drive of the Outlander PHEV was, to say the least, unconventional. The route across Catalina Island took us on twisting, mostly dirt, roads, many with sheer drop-offs on one or both sides. Those conditions have a way of instilling greater caution in a driver, and the island has a 25-mph speed limit anyway. So while we had a rare opportunity to evaluate the Outlander in rough-and-tumble conditions, we didn’t get to see how it fared in more normal conditions, like highway driving.

The Outlander PHEV relies primarily on two 60-kilowatt (80-horsepower) electric motors for power—one for the front axle, one for the rear. A 2.0-liter four-cylinder gasoline engine provides power when the 14-kilowatt-hour lithium-ion battery pack needs a charge. The Outlander PHEV can operate in all-electric mode, use the gasoline engine as a generator to power the electric motors, or use both electric and gasoline power for propulsion.

The two electric motors get the Outlander PHEV moving easily, providing the instant burst of torque electric-car drivers know well. The all-wheel drive system performed well on the low-traction surfaces of Catalina, providing fairly neutral, confidence-inspiring handling, even on dirt. That’s due in part to Super All-Wheel Control (S-AWC), a system derived from the defunct Lancer Evolution performance model that manipulates electronic driving aids like ABS, traction control, and stability control to keep the car pointed in the right direction.

The all-wheel drive system performed well on the low-traction surfaces of Catalina Island.

The all-wheel drive system may have been up to the task of navigating Catalina’s dirt roads, but the suspension certainly wasn’t. The ride was jarring, with washboard roads inducing a particularly discomforting shuddering sensation. Conditions were a bit more intense than what the average driver will experience, but we still think the ride quality could be improved.

A plug-in hybrid doesn’t offer much of an advantage over a regular car unless it’s actually plugged in, and Mitsubishi offers three options for that. Charging from a standard 120-volt household outlet takes about eight hours, according to Mitsubishi, while a 240-volt Level 2 AC charging station cuts that time in half. The Outlander PHEV is also equipped for DC fast charging, using the same CHAdeMO standard as the Nissan Leaf. If you can find a DC fast-charging station, it will charge the Outlander’s battery pack to 80 percent capacity in 25 minutes.

Official EPA fuel-economy and electric-range figures aren’t in yet, and our test drive was too short to provide a representative figure. But Mitsubishi claims the Outlander will exceed the electric range of the other plug-in hybrid crossovers currently on sale—the BMW X5 xDrive40e iPerformance, Mercedes-Benz GLE550e 4Matic, Porsche Cayenne S E-Hybrid, and Volvo XC90 T8. The Mitsubishi will need at least 15 miles of electric range to beat those luxury models.

Crash-test ratings should be similar to the gasoline Outlander, which received a five-star overall rating from the National Highway Traffic Safety Administration (NHTSA), and an Insurance Institute for Highway Safety (IIHS) Top Safety Pick+ rating. Note that the latter rating was achieved with optional driver-assist systems.

The 2018 Mitsubishi Outlander PHEV’s combination of a plug-in hybrid powertrain, crossover body, and mainstream price is something no other vehicle offers right now. But while the Outlander is the only plug-in hybrid compact crossover, there are better options for buyers who don’t need both.

If fuel efficiency is all you care about, the Chevrolet Volt and Toyota Prius Prime will likely save more gas than the Mitsubishi, albeit at the cost of practicality. At the same time, other compact crossovers like the Honda CR-V and Mazda CX-5 are better cars, even if they don’t offer a plug-in hybrid option.

That being said, no plug-in hybrid in this price range offers the space of the Mitsubishi (or its 1,500-pound towing capacity), and no other compact crossover will be able to match its fuel efficiency. The Outlander PHEV lets buyers have it all — as long as they are willing to live with some compromises.

How much does it cost to charge an electric car?
The best EV charging apps help you find the right station for any electric car
Business upfront, 31-inch TV in the back. BMW’s electric i7 is a screening room on wheels
GMC poured all of its truck-making expertise into the Sierra EV pickup
The Uber hack is an outrageous tale of a teen hacking for fun
Tesla to fix window software on 1M of its U.S. cars
Lux and refreshingly livable, Mercedes’ EQE moves EVs mainstream
How to watch Tesla’s AI Day tonight and what to expect
2023 Audi Q4 E-Tron first drive: the predictable and traditional EV SUV we need
We need more 7-passenger EVs, but the 2023 Mercedes EQS SUV has room to improve
Tesla AI Day 2022: Optimus, self driving cars, and everything else announced
Tesla hopes full self-driving beta will be out globally by the end of 2022
Elon Musk reveals first delivery date and customer for Tesla Semi truck