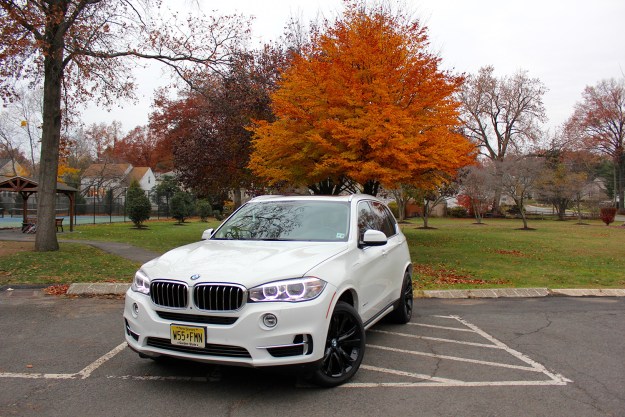 “BMW’s X5 xDrive40e adds the fun of electric torque and efficiency of EV driving to the already stellar X5 SUV.”

Driving efficiently is no longer the painful task it once was. Though there are still holdouts on the path to higher mpg (I’m looking at you, full-size pickups), most passenger cars have crept towards respectable EPA estimates.

Those who want to do one better than internal combustion have plenty of options. Diesels and gas-electric hybrids offer similar fuel economy, without demanding any lifestyle changes from their owners. Pure electric vehicles, on the other hand, don’t quite yet have the range to accommodate all driving behavior. This makes plug-in hybrids (PHEVs) the perfect fit for those who desire the perks of an EV without the major drawbacks.

Though plug-in hybrid tech has been part of the auto industry for years, it’s only recently transcended the mass-market to merge with luxury vehicles. Premium brands are now in a hurry to retrofit their best-selling models with plug-in tech, and that means SUVs are first to go under the knife. BMW, Mercedes-Benz, and Porsche now offer midsize SUV models with a short, all-electric range.

To experience the difference in fuel efficiency and performance, we decided to take a crack at BMW’s entry, the 2017 X5 xDrive40e. Just before the Northeast would dip into sub-freezing temperatures, we saddled up for a road trip between New York City and Boston.

Our journey starts among Manhattan’s skyscrapers and congestion – a perfect setting to sample the xDrive40e’s electric torque between red lights.

Though its name sounds more like a strong password than a vehicle nameplate, the plug-in X5’s badge does stand for something. All BMWs equipped with all-wheel drive wear the xDrive moniker, while rear-wheel drive X5’s use the sDrive name. The ‘40’ doesn’t really equate to any performance attribute, as far as we can tell, except that the PHEV X5 is slotted between the 35i and 50i versions in price and output. Finally, the ‘e’ is short for eDrive, which BMW associates with every iPerformance (plug-in) model.

Silently zipping us through New York’s streets and avenues is a 111-horsepower electric motor, powered by a 9.2 kWh lithium-ion battery and connected to a 2.0-liter turbocharged four-cylinder. Combined output is 308hp and 332 pound-feet of torque, channeled to all four wheels via an eight-speed automatic transmission.

In addition to the X5’s standard chassis modes, which include comfort, Eco Pro, and Sport, the xDrive40e features specific eDrive modes to adjust dependence on the electric motor. Though we start in Auto eDrive, which lets the computer find the most efficient balance between the gas and electric motors, we quickly become addicted to Max eDrive’s pure electric power. The instant torque is a velvety smooth rush that’s best enjoyed from a standstill, and feels all the more impressive when you factor in the plug-in X5’s 5,200-pound curb weight.

As we emerge from the Lincoln Tunnel, however, our electric shenanigans have caught up with us. The xDrive40e’s 14 miles of pure EV range are just about tapped. Without the time to charge (7 hours at 110V and 2.5 hours at 220V), we opt for the SUV’s gas generator, switching the eDrive to “Save” and the chassis mode to Sport. The performance drive mode may sound counter intuitive, but Sport actually translates to more aggressive energy recovery in this case. Think of it like an enthusiast’s approach to recharging: fast.

As we hit the open road, we find Comfort mode’s mild energy recapture and less regenerative braking pairs well with Auto eDrive’s intelligent powertrain management. As you’ve likely concluded by now, it takes a bit of effort to optimize the xDrive40e’s driving experience, but as we discover, even effort-free travel is efficient.

Once at a steady velocity, the plug-in X5 feels just like a standard model. Its plush seats, attractive cabin, and serene ride translate just as well with an e-motor on board. Along our route, the road narrows and winds, giving us a chance to evaluate the SUV’s steering response and chassis control. Predictably, sensation through the X5’s rudder is depressed, but inputs find their way to the front wheels extremely fast. Hefty machine that it is, the xDrive40e feels nimble through mid to large curves, but we expect its big body would roll to a more uncomfortable degree in acute corners. Highest among our praise for the plug-in X5’s driving experience is the transition between gas and electric power. In the moments when traffic slows to the point where the electric motor chimes in, the hand-off is barely discernible.

It takes a bit of effort to optimize the xDrive40e’s driving experience, but as we discover, even effort-free travel is efficient.

Strip away all the optional niceties and the X5 still feels high-end. Its standard 10.2-inch infotainment display is crystal clear, and paired with the iDrive controller, navigating to every main function is a breeze. Passenger volume is stellar, with ample room for rear seat occupants to stretch their legs and generous headroom for all. Trunk space, on the other hand, is modest due to the battery stored beneath the parcel shelf. Stowing the rear seats, however, affords up to 73 cubic feet of cargo volume – more than enough to accommodate a trip to Ikea.

By the time we’ve explored every feature, pressed every button, and tried every XM radio station, Boston is upon us. We beeline to the nearest charging station, scramble into a coffee shop, and crunch the numbers from our journey.

EPA estimates for the 2017 BMW X5 xDrive40e are 23 city, 25 highway, 24 combined, and 56 MPGe. Our real world test churns up 27 mpg from 190 miles of mostly highway travel (and no plug-in recharging). To put that figure another way, we’ve only used 30 percent of the X5’s 22-gallon fuel tank. You may officially label us impressed.

The xDrive40e may seem like a gap-filler to some, with limited all-electric range and only slightly higher mpg on paper. However, as we learned, BMW’s engineers have optimized the interplay between gas and electric powertrains to give a midsize SUV the real-world fuel economy of a much lighter, much smaller vehicle. Until battery technology renders PHEVs useless, there isn’t a more efficient option that ignores range limits.

BMW’s eDrive X5 price tag may seem steep at $63,095 (including destination), but factor in the $4,585 federal tax credit (and any available state incentives), and it becomes a much more attractive proposition. The silent joy of instant electric torque alone is worth a small price bump.

BMW’s X5 xDrive40e has two main rivals. Mercedes-Benz ‘s GLE550e boasts 436hp, 12 miles of pure EV driving, and 21 combined mpg. Porsche’s Cayenne S E Hybrid has similar performance: 416hp, 14 miles of all-electric driving, and 22 combined mpg. Both vehicles, however, cost more than the BMW ($66,300 for the Mercedes and $78,700 for the Porsche), and neither can match the X5’s combined or MPGe estimates.

BMW’s plug-in X5 debuted for the 2016 model year, and barring dramatic improvements in battery technology, expect the xDrive40e to continue in its current form for a couple more years. The next update will likely improve the X5’s all-electric range considerably.

Among its competitors, the plug-in X5 makes the least power, but is the most efficient and affordable. If you don’t absolutely need 400 horsepower to run errands, there’s no reason not to choose the xDrive40e. The plug-in X5’s greatest competition may actually come from within its own ranks. BMW’s X5 35d (diesel) offers better fuel economy, more torque, and is slightly cheaper (before the PHEV’s tax incentives). Still, we’d choose the xDrive40e for its fuel-free driving capability and electric torque.