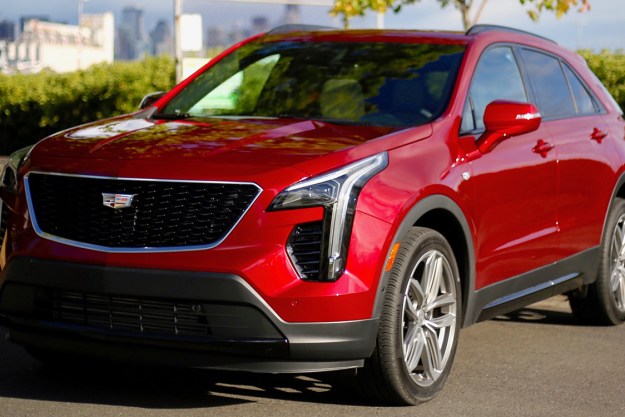 “To our eyes, the Cadillac XT4 is a respectable rival for current segment leaders”

A quick scan of the automotive market says Cadillac has some serious catching up to do. While just about every premium brand offers three or more SUVs, Caddy trudges along with just two: the XT5 and the Escalade.

Why is a sedan-heavy lineup such a big deal? As of this year, light trucks (including CUVs and SUVs) hold roughly a 2:1 market share compared to passenger cars. Customers in every income bracket want a utility vehicle, which is why we’re seeing first-time entries from sedan stalwarts like Rolls-Royce. If Cadillac wants to survive, it has to play ball — and play it well.

The 2019 Cadillac XT4 is the American luxury brand’s first small SUV, slotting under the XT5. Aimed at younger buyers, the XT4 is intended to be a nurturing product — something to introduce new customers and lead to future Cadillac sales. As such, it’s priced at an attractive $35,790 (including destination) and is offered with cutting-edge convenience tech. Though on the larger side of its subcompact segment, the XT4 matches up against BMW’s X1 ($34,895), Mercedes-Benz’s GLA ($34,395), Audi Q3 ($33,875), and Volvo XC40 T4 ($34,195).

No longer a tech dino

We’ve sampled some pretty frustrating infotainment systems over the years, but Cadillac’s User Experience system (CUE) was consistently among the worst offenders. Sluggish response to inputs, finicky touch controls, and confusing menus made CUE a complete headache. Imagine our surprise, then, to discover the overhauled infotainment in the XT4 to be completely brilliant.

CUE has done a complete 180 to become a clever, intuitive infotainment system.

To prove it was serious about this segment, Cadillac built the XT4 on an all-new platform, gave it a new engine, and borrowed some of the best suspension tech from top-shelf GM models.

“Stiff” and “light” are the key elements of the XT4’s underpinnings, with a high-strength steel architecture, a solid mounted front cradle with lateral cross-brace, newly designed control arms, and a new electric power steering system. The suspension is comprised of MacPherson strut front setup with rebound springs and a five-link independent rear. Luxury and Premium Luxury trims ride on fixed dampers, but Sport models can be optioned with GM’s Magnetic Ride Control (otherwise known as adaptive dampers).

With best-in-class torsional rigidity, the XT4 should handle itself well in corners — and it does. Trouble is, steering and braking feel doesn’t line up with the chassis responsiveness. A lack of initial brake bite and zero pedal feel are worrisome characteristics for a performance-oriented crossover. Cadillac says the XT4’s electro-hydraulically controlled braking system is more efficient and reduces parasitic demands on the engine, but if that comes at the cost of driver confidence, most won’t appreciate the trade-off. Steering feedback is no better, with minimal communication to accompany genuinely impressive road-holding maneuvers.

The flip side to this lack of engagement is premium-grade ride quality and cabin isolation.

The flip side to this lack of engagement is premium-grade ride quality and cabin isolation. Both fixed and active dampers filter harsh bumpers, with the latter units going a step further to continuously stabilize the body (up to 500 times per second). Meanwhile, engine, road, and wind noise are never distracting, helping establish the XT4’s luxury segment credentials.

Regardless of trim, the XT4 is equipped with a new 2.0-liter turbocharged four-cylinder that produces 237 horsepower and 258 pound-feet of torque. A nine-speed automatic transmission sends power to the front wheels or all four wheels if buyers choose the $2,500 all-wheel drive system. Cadillac says the XT4 will jog to 60 mph in about 7.0 seconds and top out at 130 mph. None of those figures are segment highs, but from the driver’s seat, the XT4 feels properly quick in all driving conditions.

The reason for the XT4’s surprising performance is the combination of smart engine technologies. Twin-scroll turbocharging, cylinder deactivation, and a three-stage valvetrain balance power and efficiency. Peak torque is on hand from just 1,500 rpm, and the drop-off doesn’t arrive until after 5,000 rpm. Cadillac’s transmission engineers also deserve some credit. In auto mode, shifts from the nine-speed box are darn near imperceptible and there’s never a delay in response when punching the throttle. Manual mode is less of a victory, with painful delays between gear changes and a general refusal to downshift at times.

The EPA estimates front-drive XT4 models will return 24 city, 30 highway, and 27 combined mpg. All-wheel drive models should take a 2-mpg hit to combined mpg, though our time behind the wheel of an AWD version saw 27.1 mpg from a day’s worth of mixed driving.

Dashing details on a demure body

Unlike Volvo’s XC40, the XT4 doesn’t grab your attention with funky styling or sharp angles. Rather, the smallest Caddy matches the refinement of its German rivals while sneaking in a few upscale details.

Our favorite looks are the front and rear views, each showcasing unique LED light signatures that help distinguish the XT4 from its rivals and bring it in line with other Cadillac models. Head on, the XT4’s daytime running lights add a raised “brow” to Cadillac’s traditional L-shaped beams. At the back, Cadillac’s designers merge the Escalade’s “light tower” design with a horizontal blade for a striking new form. Look closer at each light arrangement and you’ll spot Cadillac emblems and horizontal slats that are carved within the glass housings.

The rest of the XT4’s exterior is best characterized as a downsized XT5 crossover – save for the notched tailgate, which is reminiscent of the SRX (predecessor to the XT5). An overabundance of black plastic cladding – decorating the front bumper, wheel arches, rocker panels, and rear bumper – feels a bit lazy, but the XT4’s design is otherwise handsome.

Choosing either the Sport or Premium Luxury trim takes the XT4 in either a fierce or flashy direction. Sport models add black gloss exterior accents, a black mesh grille, dark taillight housings, body color-matching door handles, and optional 20-inch wheels. Premium Luxury variants, meanwhile, feature bright, satin chrome details, and an alternate set of 20-inch wheels. Given the segment and the audience, we aren’t quite sure why Cadillac even offers the blinged-out Platinum Luxury trim, but perhaps aging empty nesters will appreciate the classic chrome bits.

Inside, the XT4 balances premium touches with an eye-pleasing layout for a convincing entry-lux product. A thick-rimmed leather steering wheel feels excellent in the hands, supple leather chairs (optional upgrades from standard leatherette) are available with heating and ventilation, a panoramic sunroof brightens the cabin, and the embedded infotainment display is more appealing than the tacked on monitors found in competitor SUVs. We prefer the Sport version’s carbon fiber trim to the Premium Luxury’s gloss wood inserts, but little else is distinguishable between the two grades.

The XT4 doesn’t completely escape GM’s cost-cutting tactics. Below the driver’s beltline, hard, flimsy plastics spread like a weed. Even the rear door panels are covered in cheap materials. Base XT4’s also feature a weensy, outdated TFT display. At the $35K price point, these niggles are forgivable, but as the XT4 approaches its loaded $55K+ watermark, they are less so. Passenger space, meanwhile, is excellent for the segment. At 39.5 inches, the XT4’s rear legroom is substantially more than the next closest rival, BMW’s X1. Headroom is adequate, but tall riders may brush their noggins in the headliner. Cargo has a tighter squeeze, with just 22.5 cu. ft. behind the second row and 48.9 cu. ft. total.

Cadillac backs the 2019 XT4 by a 4-year/50,000-mile new vehicle warranty, including 3 years or 36,000 miles of free basic maintenance. This level of coverage is among the best in class. Unfortunately, Cadillac’s poor reliability ratings could mean trouble for owners beyond the warranty period.

The NHTSA and IIHS have yet to crash test the XT4, so it has not been scored.

The premium subcompact SUV segment is both a natural entry-point for first-time luxury car buyers and a replacement for premium sedan owners. To say the market is getting crowded is a severe understatement, but for all the options, only a few models are compelling. Volvo’s XC40 and BMW’s X1 stand apart as fun-to-drive, technologically advanced, and utility-oriented offerings. These are the XT4’s fiercest rivals.

Entry-level versions of the XC40 ($34,195) and X1 ($34,895) are a slightly cheaper than the XT4 and offer better mpg. The XT4 counters with higher power and torque figures, available all-wheel drive at all trim levels, and the more rear legroom. We prefer the XT4’s infotainment to Volvo’s buggy tablet-style system, but BMW’s iDrive remains a favorite. Only the XC40 is available with a fully digital driver display (it’s actually standard equipment). All three SUVs can be optioned well over $40K, but the X1 and XT4 easily push past the $50K point.

Fiddling around with Cadillac’s online configurator, here’s how we’d build our ideal XT4. Jump first to the Sport trim ($4,500) for its styling details, thicker steering wheel, and adjustable bolsters. Add to that Cadillac’s dual-clutch all-wheel drive system ($2,500). The only no-cost paint color is silver, so we’ll begrudgingly pay $625 for the stellar black metallic. Choosing Sedona leather seats necessitates both the comfort and convenience and cold weather packages for a total of $3,300. These two packages add a power adjustable passenger seat, massaging front seats, front ventilated seats, a hands-free tailgate, heated front and rear seats, and a heated steering wheel. Grouping the driver awareness and driver assist packages ($1870) cover the best driver aids, but require adding 20-inch wheels ($2,200). Last is the technology package ($1,400) to get wireless charging, a power adjustable steering wheel, a head-up display, and 8-inch TFT display. The total for all this equipment is a frightful $51,085.

Whether the XT4 will completely revive the Cadillac brand and increase its appeal with younger buyers remains to be seen. What is certain is the premium subcompact’s significance to Caddy’s bottom line. Even if the XT4 were a dud, its sheer presence would boost sales. To our eyes, though, the XT4 is a respectable rival for current segment leaders. A good powertrain, advanced tech, handsome styling, and adult-sized cabin should pique the interest of open-minded shoppers. Best to keep the options to a minimum, though.