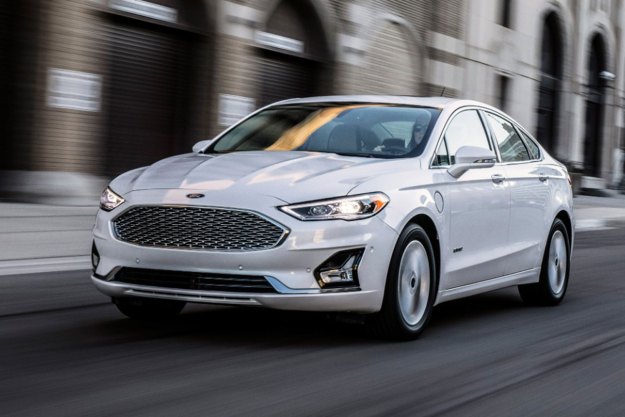 The 2019 Ford Fusion Energi is a car without a future. After 116 years building family cars, Ford has announced the end of its passenger car lineup to instead concentrate on SUVs and trucks. Only the Mustang will survive past next year. On top of that, the threatened tariffs on products made in Mexico could add thousands of dollars to the Fusion’s price.

So, why are we covering this moribund car? Because it’s the last American plug-in hybrid sedan, it does a good job at its intended purpose, and you can get a great deal on one before they’re gone.

The Fusion Energi is based on Ford’s bread-and-butter Fusion midsize sedan, except it has a 9 kWh battery pack living in the trunk and a plug-in hybrid drivetrain that can go up to 26 miles on electric power. The sticker price on a top-drawer Titanium trim Fusion Energi is $34,595 after Ford’s $2,000 sales incentive is applied. There’s only one option you can elect for, and that’s a power moonroof for an extra $1,095. The destination charge is a very reasonable $895. Out the door with the moonroof and one of the premium paint colors, the Fusion Energi costs $36,980.

Because the Fusion Energi comes in just one trim, there are no real choices to make. You get comfortable perforated black or brown leather seats throughout the car. The front seats are heated, ventilated, and 10-way adjustable with position memory. The steering wheel is also leather-trimmed and heated. Dual-zone climate control is included, too.

There’s always a tradeoff somewhere, and in the case of the Fusion Energi, it’s in the back. Specifically, the battery pack is located in the trunk. That takes the capacious 16 cubic feet in the standard Fusion down to a cramped 8.2 cubic feet in the Energi model. Think about an average overhead bin on an airliner and you’ve got the right idea. If you need to haul a bunch of luggage, it’s going to go in the back seat.

Let’s cut to the chase—this is not an exciting car. But in fairness, it’s not intended to be. Buyers who want performance are going to walk right over to the Mustangs, as they should. What the Fusion Energi does well is fuel economy and comfort.

There’s always a tradeoff somewhere, and in the case of the Fusion Energi, it’s in the back. Specifically, the battery pack is located in the trunk.

The lithium-ion battery that powers the Fusion Energi hybrid system has 9 kilowatt hours of capacity, which is enough to drive the car on electric power for about 26 miles. The really good part happens when the Fusion Energi is running on gasoline. At that point, you’ll still get 42 MPG in typical combined city/highway driving. Best of all, the Fusion Energi will cover about 610 miles before it runs out of electrons and gas. That level of efficiency makes the Fusion Energi a solid choice for an economical commuter car.

Because the battery is small, you can recharge the Fusion Energi from zero in about 2.6 hours on a standard Level 2 (240 Volt) charger. You can completely recharge the battery in 7 hours using any ordinary household 120 Volt outlet, so you can even get away without installing a charging station at your house.

There’s nothing negative to say about the Fusion Energi on the road, but nothing overly positive either. The car does its job without any bad habits worth mentioning. This car is vanilla head to toe. The only fault I observed in a week of driving the Fusion Energi is that the engine vibration is particularly noticeable after you’ve been driving on electric power. Bottom line: this is a car you can drive back and forth to work every day, saving a lot of money on fuel. Don’t expect interesting dynamics here.

There are still comparatively few plug-in hybrid sedans on the market, and with the way EVs are adding range, plug-in sedans are not likely to become a growth market. The Toyota Prius Prime leads the pack at $27,350 with 25 miles of EV range and total range of 640 miles. The Honda Clarity Plug-in Hybrid at $33,400, the Kia Optima Plug-in Hybrid at$36,090, and the Hyundai Sonata Plug-in Hybrid at $37,500 are the other contenders.

The Honda will go 47 miles on its batteries, but only 340 miles of total range. The Kia Optima and the Hyundai Sonata both offer about the same EV and total range as the Fusion Energi.

The Chevrolet Volt would also have been a rival, but the last one left the factory a few months ago. The Fusion Energi will exit the marketshortly, leaving only the Toyota,Honda, Hyundai, and the Kia.

The Fusion Energi comes with Ford’s standard 3 years or 36,000 miles total warranty, with the drivetrain and rust-through covered for 5 years or 60,000 miles.

Because there’s only one trim, this part is easy. We’d take the brown leather, pay $395 extra for the nice metallic red color, and we’d skip the moonroof. That being said, we’d also play hardball with the dealer to get the best possible price on a car we know they are having trouble moving.

The Fusion Energi isn’t for everyone, but if you want a fuel-efficient, comfortable car for a longer commute, it’s a worthy choice. You get a lot of cabin amenities for your money, plus a tax credit. The Fusion Energi qualifies for a Federal income tax creditof $4,609. Many statesoffer tax credits and benefits as well.

Yes. If you’re looking for a commuter or family vehicle, the Fusion Energi offers a solid package of tech, comfort, and economy. With the current incentives and looming possibility of crushing tariffs, the time to buy is now. The car might not a future at Ford, but that’s no reason not to consider it in the present.

Business upfront, 31-inch TV in the back. BMW’s electric i7 is a screening room on wheels
Ford and VW close down Argo AI autonomous car unit
GMC poured all of its truck-making expertise into the Sierra EV pickup
Check out Spectre, Rolls-Royce’s first all-electric car
Cruise’s robot taxis head to Arizona and Texas
Uber says it’s investigating ‘cybersecurity incident’
Nvidia’s Drive Concierge will fill your car with screens
The Uber hack is an outrageous tale of a teen hacking for fun
Tesla to fix window software on 1M of its U.S. cars
Lux and refreshingly livable, Mercedes’ EQE moves EVs mainstream
How to watch Tesla’s AI Day tonight and what to expect
2023 Audi Q4 E-Tron first drive: the predictable and traditional EV SUV we need
We need more 7-passenger EVs, but the 2023 Mercedes EQS SUV has room to improve