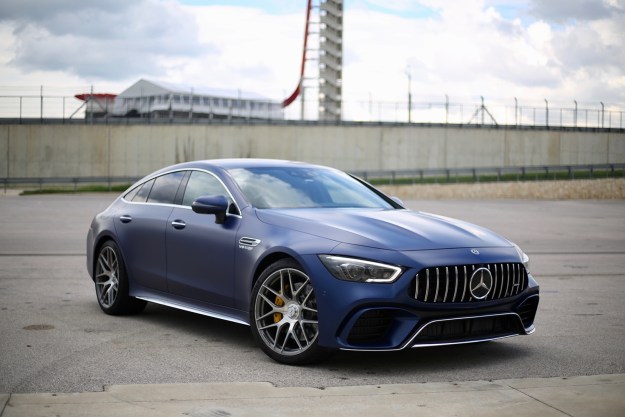 “With the GT 4-Door Coupe, AMG has seemingly bent physics to its will.”

For the last few years, Mercedes-Benz has put a great deal of effort and resources into the development of its in-house performance division, AMG. No longer tasked with simply enhancing Mercedes-Benz models, Mercedes-AMG now builds production vehicles from the ground up with an emphasis on track-capable performance.

Following in the footsteps of the SLS AMG and Mercedes-AMG GT, the new Mercedes-AMG GT 4-Door Coupe is the third AMG vehicle designed and engineered entirely in-house. With this level of creative control, Mercedes-AMG says it’s endowed the GT 53, 63, and 63 S 4-Door Coupe with true sports car driving dynamics — at no cost to daily driving comfort. Pricing information has not yet been disclosed, but the GT 4-Door will compete directly with Porsche’s Panamera, which ranges from $85,000 to $185,000.

Our first drive of the low-slung four-seater takes us to the twisty back roads around Austin, Texas, and to the Circuit of the Americas which welcomes the annual American Grand Prix. Will the GT 4-Door be too fierce for the family, too tame for the track, or snugly in between?

Though the AMG GT 4-Door Coupe doesn’t receive Mercedes-Benz’s latest infotainment tech, MBUX, its twin 12.3-inch displays and COMAND module are still dazzling. The high-quality glass displays appear as one seamless widescreen but split content right above the start/stop button. The driver’s display is viewed in one of three orientations: classic, sport, or supersport (which centers the tachometer). Touch controls on the steering wheel, which swipe like a smartphone, customize information on the instrument cluster. An 8.0-inch head-up display is available to complement the large digital monitors.

There’s no such thing as a slow GT 4-Door Coupe, but the range does graduate from simply “fast” to viciously so.

A track pad with haptic feedback and a set of brushed metal toggles on the dash control the center screen, which displays navigation, media, climate control, and other common functions. COMAND still isn’t the most intuitive system on the market, but it’s no longer frustrating to use thanks to faster response times and a more logical menu structure. Multiple USB ports, Bluetooth, Apple CarPlay, Android Auto, and a Wi-Fi hotspot are all part of the package.

There’s no such thing as a slow GT 4-Door Coupe, but the range does graduate from simply “fast” to viciously so depending on your chosen spec.

GT 53 models embrace a turbocharged, 3.0-liter straight six-cylinder engine with a hybrid trick. Though the 429-horsepower six has plenty of grunt, the addition of a starter-generator positioned between the engine and the transmission bumps output by 21 hp and cuts torque delay significantly. If 4.4 seconds to 60 mph doesn’t impress, the GT 63 and 63 S should satisfy.

The Mercedes-AMG GT 63 S 4-Door Coupe is unlike any four-door we’ve driven in anger.

On paper, a family hauler seems like a mismatched vehicle for a Formula One racetrack, but the Mercedes-AMG GT 63 S 4-Door Coupe is unlike any four-door we’ve driven in anger.

Wielding what is surely two-plus tons of mass (its official curb weight hasn’t been announced yet) is no easy task, but AMG uses a number of sophisticated technologies to make the GT 63 S light on its feet. The root of all athleticism is AMG’s Performance 4Matic+ AWD system, which continuously varies torque split between the front and rear axles based on driving style and conditions. Paired with an electronic limited-slip rear differential, multi-chamber air suspension, active rear steering, and a set of grippy Michelin PS4S tires, the GT 63 S clings in corners and surges at exit. S models also benefit from adaptive engine mounts, which stiffen depending on drive mode to increase chassis rigidity and responsiveness.

Barreling through COTA’s 3.4-mile circuit, the GT 63 S takes precise lines through corners, carries tremendous velocity down the straights, scrubs speed effectively (thanks to our tester’s six-piston carbon ceramic stoppers), and rips between gears without hesitation. Weight transfer is the only indicator that you aren’t driving a track-bred two-door; compared to the AMG GT R, the GT 4-Door Coupe needs a fraction of a second longer to settle before taking the next move. That said, we doubt any other four-door could keep pace with the GT 63 S on a racing circuit.

With the all-new CLS forfeiting its AMG specification, the GT 4-Door Coupe assumes the mantle of Mercedes-AMG’s most dynamic four-door. Styled to match its aggression, the GT sits low and wide, with a fastback silhouette, broad fenders, and long hood.

Like the two-door, the GT 4-door wears Mercedes-AMG’s shark nose, slotted Panamericana grill, piercing LED headlights, and active air channel flanked by large inlets. If not for the hood angle and taller ride height, one could easily confuse the two- and four-door GTs. In profile, a range of 19-, 20-, and 21-inch wheels tuck neatly within the GT’s pronounced fenders. Our favorite set, the chunky five-spoke monoblock, is a throwback to late 1990s AMG models and look appropriate on the GT’s pumped-up bod. Importantly, the GT’s gently tapering silhouette is also distinguishable from the redesigned CLS. At the rear, thin LED taillights, integrated air extractors, and quad exhaust ports balance muscle and elegance.

The GT 4-Door Coupe can be dressed in one of six styling packages, with black gloss, bright chrome, or carbon fiber treatments paired with unique bumpers. A class-exclusive fixed rear wing is part of one such kit, though we prefer the integrated (and vastly subtler) trunk spoiler. Customers can also choose from a large selection of standard and matte paint colors. However you spec it, the GT 4-Door Coupe is a handsome devil.

Within the GT 4-Door Coupe awaits Mercedes-Benz’s familiar, luxurious cabin — aroused with AMG performance touches. A large, three-spoke, flat-bottom steering wheel features a dial to quickly flip between drive modes and a pair of reconfigurable tabs to change performance settings on the fly. Customers can choose from two front seat options, each available in MB-Tex, Nappa, or microfiber suede coverings. The more aggressive AMG Performance seats include adjustable side bolsters and are available with seat heating or ventilation. Standard sport seats add a massaging function to the comfort equation.

However you spec it, the GT 4-Door Coupe is a handsome devil.

Only a pair of rear passengers can tag along for the ride, accommodated by a choice of seating configurations. Standard is a set of non-foldable chairs with an open center area. The optional executive package adds a fixed center console with convenience feature settings and folding seatbacks. In the name of chassis rigidity, the GT 4-Door Coupe isn’t available with a panoramic sunroof, which does make the rear compartment feel smaller than it is.

The GT 4-Door Coupe has not yet been crash-tested by the IIHS or NHTSA.

A year ago, the GT 4-Door Coupe would have had several direct rivals, including BMW’s M6 Gran Sport and Audi’s RS7, but today the only direct competitor is Porsche’s Panamera. Shoppers in the performance four-door space will likely consider BMW’s M5 and Tesla’s Model S P100D, as well. The GT will inevitably overlap with the E63.

Mercedes-AMG hasn’t released its online configurator or full packaging details, so we can only submit our vote for the GT 4-Door Coupe’s high-level equipment. It should come as no surprise that, of the three, we’d pick the range-topping GT 63 S for its monstrous power and sensational handling. Loaded with standard performance and tech goodies, there are only a few add-ons we’d choose: the driver assistance features, the Burmeister sound system, the head-up display, and the executive rear seats.

With the GT 4-Door Coupe, AMG has seemingly bent physics to its will. Though weighed down by luxury features, sound-deadening materials, and advanced safety technologies, the GT tames a race track better than most two-door sports cars. And when the lapping session ends, it takes on the role of premium commuter with the same readiness. Consider the four-door performance benchmark elevated.