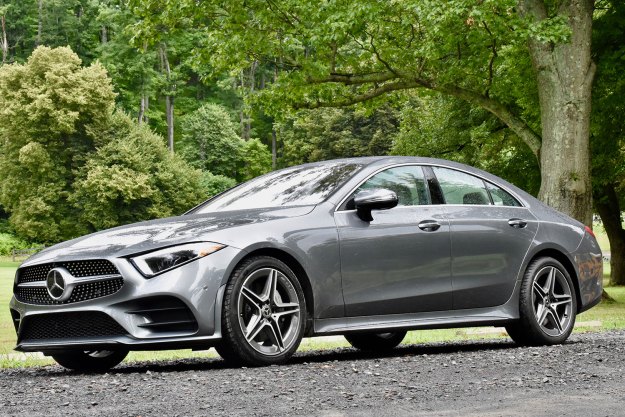 You might think a coupe has two doors and a sedan has four, but Mercedes-Benz begs to differ. In 2004, the German luxury automaker launched the first-generation CLS, a “four-door coupe” sporting two sets of doors but with sleeker styling than the average sedan. As nonsensical as a four-door version of a two-door body style may seem, the CLS spawned an entire segment of similarly styled four-door luxury cars.

The Mercedes now faces competition from the BMW 6 Series Gran Coupe, which will soon reach the end of its career, and the freshly redesigned Audi A7. So, can the redesigned 2019 Mercedes-Benz CLS-Class remain on top in the segment it created?

When the 2019 CLS hits U.S. showrooms later this year, Mercedes will offer CLS450 and sportier AMG CLS53 models, with rear-wheel drive or 4Matic all-wheel drive on the CLS450 and mandatory 4Matic+ on the CLS53. We took a CLS450 4Matic on a rainy trek across New York City and New Jersey. Mercedes hasn’t released pricing, but our test car was loaded with options like air suspension, 12.3-inch digital instrument cluster, Burmester 3D surround-sound system, and an array of driver aids.

The interior of the CLS450 will be immediately familiar to anyone who has spent time in a current-generation Mercedes S-Class or E-Class. It features the same elaborate COMAND infotainment system, consisting of a 12.3-inch central screen and a controller that’s part touchpad, part click wheel.

Whether it’s digital gauges or navigation maps, the graphics are beautifully rendered. A combination of steering wheel controls, the touchpad-click wheel controller, and voice commands make it relatively easy to perform basic functions. But other functions, like adjustments the head-up display, are buried deeper in the menus. The central screen also includes icons that make one initially think it’s a touchscreen when it isn’t. As with many other luxury-automaker infotainment systems, the CLS’ system works once you get used to it, but there is a bit of a learning curve.

The rest of the interior featured exactly the level of quality one would expect from Mercedes. While we’re not aware of any trees on planet Earth that produce silver wood, the trim looked cool. So did the speakers for the Burmester audio system, the row of round air vents, and the ambient lighting (voice controlled and featuring 64 colors) that lights up the cabin like a nightclub. Like the infotainment system, the overall design of the interior borrows heavily from the E-Class and S-Class sedans.

The CLS is roughly the same size as the E-Class (the two cars share a basic platform), but its lower roofline reduces headroom, and there is less trunk space as well. That’s the price you pay for style, and it’s a price customers have been willing to pay not only for two previous generations of CLS, but for rivals like the Audi A7 and BMW 6 Series Gran Coupe. But even the Bimmer offers more headroom, legroom, and shoulder room front and rear than the Mercedes. Audi is in the midst of launching a redesigned 2019 A7 in the U.S. and didn’t have full specs available.

Thankfully, we didn’t have to test that feature, but we did experiment with some of the others. Like other adaptive systems, Distronic can automatically adjust its speed to the car in front. We found it lagged a bit in catching up after the leading car slowed down and reaccelerated. The lane-keeping assist system was a bit of an annoyance, aggressively wrenching the car to one side when it detected a wheel out of place.

Under the hood, the CLS450 offers something old and something new. It’s the first Mercedes since 1999 to have an inline-six engine but it works with the automaker’s new EQ Boost mild-hybrid system.

The interior featured exactly the level of quality one would expect from a Mercedes.

An inline six places all six cylinder in a row, hence the name. Mercedes used the configuration in the legendary 300SL Gullwing and numerous other models for decades. But, the straight-six is more than a piece of trivia for card nerds. Putting six cylinders in a row creates excellent balance, allowing the engine to rev more smoothly while vibrating less. The more compact packaging of V6 and turbocharged inline-four engines has made inline-sixes quite rare. BMW is one of the few firms that has never walked away from the configuration.

The 3.0-liter turbocharged gasoline engine produces 362 horsepower and 369 pound-feet of torque, and it’s bolted to a nine-speed automatic transmission. The EQ Boost system adds a small electric motor that can contribute 21 hp in short bursts. Mercedes claims the rear-wheel drive CLS450 will do zero to 60 mph in 5.1 seconds, while the all-wheel drive 4Matic model can perform the same task in 4.8 seconds. Both versions are electronically limited to 130 mph.

The CLS is a regular gasoline car with a hint of electric assist, not a conventional hybrid like a Toyota Prius. But even this limited amount of electrification eliminates the need for belt-driven accessories, allows the standard engine start-stop system to operate more aggressively, and even enables the car to glide with the engine off under certain circumstances. It’s all in the name of fuel efficiency, although official EPA figures won’t be available until closer to the car’s launch.

Under the hood, the CLS450 offers something old and something new.

We didn’t really notice the intervention of the electric motor while driving, which is probably what many customers will prefer. In a straight line, the CLS450 feels as quick as Mercedes’ zero to 60 mph claims suggest but it turns into a stereotypical luxury cruiser in the corners. Our test car’s optional air-suspension system couldn’t keep body roll in check, though at least it kept the ride nice and comfy. The steering gave very little indication of what the front wheels were doing.

Mercedes has plenty of other options if you want a sporty midsize four-door. Around the same time the CLS450 hits showrooms, Mercedes will release an AMG CLS53 version with a performance-tuned version of the 3.0-liter inline-six EQ Boost powertrain good for 429 hp and 384 lb-ft of torque. Mercedes-AMG will soon launch its GT 4-Door Coupe, adding more sportiness to the CLS’ basic “four-door coupe” recipe. Alternatively, you can also get a Mercedes-AMG E63 S sedan with a 603-hp 4.0-liter twin-turbo V8.

Insurance Institute for Highway Safety and National Highway Traffic Safety Administration crash-test ratings for the 2019 Mercedes-Benz CLS450 are not available at this time.

Mercedes-Benz offers a 48-month/50,000-mile bumper-to-bumper warranty on new cars. The 2019 CLS450 is an all-new model, debuting a complex new powertrain, so predicting future reliability is difficult.

But we were less enthusiastic about the performance of the driver aids in the driver assistance package, particularly the lane-keep assist and steering assist features. These features are supposed to make driving easier and safer, but we found them to be less than helpful on the road. Their interventions were clumsy and unpredictable. While you can turn these features off, we really don’t see the point of paying for something you don’t plan on using.

The 2019 Mercedes-Benz CLS450 is a great car let down by the fact that it sits in a lineup crowded with other great cars. Most of its tech comes from the E-Class. We liked the features that are unique to the CLS – its four-door coupe styling and inline-six powertrain – but they’re not enough to make a case for the CLS on their own.  If you want a car that’s more stylish than a four-door sedan, Mercedes already offers the two-door E-Class coupe. The imminent launch of a second Mercedes four-door coupe – the AMG GT 4-Door – muddles things even further. The CLS just doesn’t stand out among so many three-pointed stars.

We need more 7-passenger EVs, but the 2023 Mercedes EQS SUV has room to improve
Lux and refreshingly livable, Mercedes’ EQE moves EVs mainstream
Tesla to fix window software on 1M of its U.S. cars
2024 Chevrolet Equinox EV aims for affordability with $30,000 base price
Jeep is launching its first two electric SUVs in the U.S. in 2024
Cruise’s robot taxis head to Arizona and Texas
Uber says it’s investigating ‘cybersecurity incident’
Nvidia’s Drive Concierge will fill your car with screens
The Uber hack is an outrageous tale of a teen hacking for fun
How to watch Tesla’s AI Day tonight and what to expect
2023 Audi Q4 E-Tron first drive: the predictable and traditional EV SUV we need
Tesla AI Day 2022: Optimus, self driving cars, and everything else announced
Tesla hopes full self-driving beta will be out globally by the end of 2022