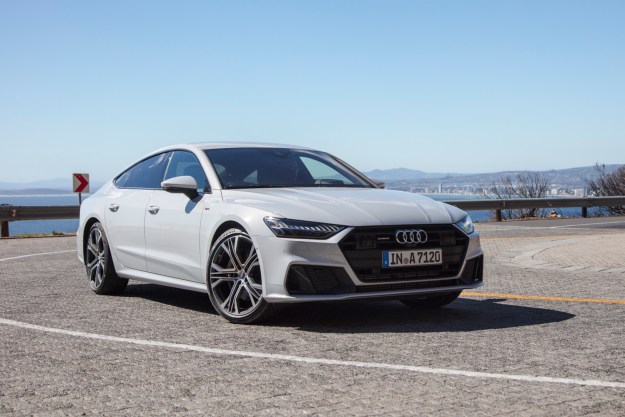 “The second generation of Audi's style symbol is off to a flying start.”

As journalists, we constantly measure details when we test cars. We know which engine makes the most horsepower, which car returns the best fuel economy, and which performance coupe is heavier than it ought to be. How do you quantify the more abstract aspects of a car, like curb appeal, road presence, and driving enjoyment? We’d use the all-new 2019 Audi A7 as a yardstick.

The second generation of Audi’s driver-friendly fastback made its debut last October. Stylists took what people liked about the original car, such as the dashing design, and carefully honed it into a smarter, more refined package. To our eyes, it works well. It’s one of the most aesthetically-pleasing cars to come out of the four-door coupe mold. Intricately-styled lights on both ends help the A7 stand out even when it’s pitch black outside.

The A7 upholds Audi’s reputation for making cars with crisp-looking interiors. Horizontal pieces of trim on the dashboard emphasize the cabin’s width while adding a touch of understated elegance, which matches the exterior design. It’s all clean, purposeful, and characteristically Teutonic; you won’t find a line, a crease, or a dip that’s superfluous or overly ostentatious. Designers neatly embedded the air vents into the top part of the dashboard, and hid the front USB ports out of sight under the armrest. We found the front seats softer than the ones in the Porsche Panamera, which puts a bigger focus on dynamism than its cousin from the Audi clan.

The infotainment system seems daunting at first. Three separate screens; picture that. That’s at least one more than you’ll find in most cars currently in the A7’s competitive set, like the Mercedes-Benz CLS. Road testers in the 1970s had to worry about humidity making its way under the distributor cap. In 2018, we only pop the hood to satisfy our own curiosity, and we don’t bring our own tools to launch events, but we need to figure out how to integrate a trio of small televisions into the average commute. In reality, the setup is a lot less intimidating than it looks because it’s intuitive and, ultimately, everything is there for a reason.

The 2019 Audi A7 read our handwriting, an astounding feat even we can barely pull off.

Take a seat in the A7 and the first screen you see is behind the steering wheel, right in your line of sight. It’s a 12.3-inch digital instrument cluster Audi calls a virtual cockpit. It displays the map and a pair of gauges, and buttons on the steering wheel give you the useful option of zooming in and out. Instead of the map, the screen can display information such as the outside temperature and real-time fuel economy, the media settings, or a connectivity menu.

We left the map on during our time behind the wheel. We found it’s less distracting to look down at the instrument cluster for directions than over at the center console, and the virtual cockpit was more informative than the head-up display our test car came equipped with.

This brings us to screen number two. It’s the standard infotainment screen you find in a majority of new cars today. It’s a 10.1-inch, driver-oriented haptic unit that simulates button presses, and Audi made it as easy to use as a smartphone or a tablet. If you want the navigation icon closer to you, simply press down on it for a second or two and drag it towards you. The bottom, 8.6-inch screen displays the climate control and seat adjustment settings. It also doubles as a notepad thanks to handwriting-recognition technology the driver can use to manually write in an address. The A7 read our handwriting, an astounding feat even we can’t normally pull off.

Tesla and Volvo eschew the dual-screen setup in favor of one immense screen, so why didn’t Audi do the same? We asked. It turns out decision-makers concluded the two-screen look better suits the sporty vibe they sought to create inside the A7. Placing the bottom screen at a different angle than the top one also lets the front passengers use the gear selector as an arm rest when they write in a destination.

The accelerator pedal summons 340 horsepower, which isn’t asking a lot from a 3.0-liter V6. Twin turbochargers – in lieu of the outgoing model’s supercharger – help the six-cylinder make 368 pound-feet of torque, while a seven-speed automatic transmission sends the total output to the pavement. The masterstroke is the quattro all-wheel drive system, which Audi drew from the depths of its successful rally department in the 1980s and has perfected since.

The 340-horsepower rating places the new A7 right between the entry-level Panamera, which offers 330 horses, and the base CLS, whose straight-six engine turns the dial up to 362. The Audi and the Mercedes are within a pound-foot of each other in the torque department, while the Porsche lags behind with 331. Of course, numbers rarely tell the whole story.

Audi made a genuine grand tourer that’s pleasant to travel in and not over the top.

Like the bigger A8, the A7 adopts electrification in the form of a 48-volt belt-starter generator permanently connected to the crankshaft and linked to a lithium-ion battery pack. The mild hybrid system recuperates the energy generated while braking. It also allowed engineers to fit a more aggressive start/stop system, which helps save gasoline. The Environmental Protection Agency (EPA) hasn’t released fuel economy figures yet, however.

That’s the fine print; what does it mean in real life? For starters, the A7 isn’t a hardcore, no holds barred performance car like the RS 3 or the R8. It’s not the kind of sedan that urges you to hit the track for a session of hot laps. It’s a genuine grand tourer, one that exists at the intersection of performance and comfort and thrives on a twisty back road with the occasional long, sweeping turn. Even when pushed hard, it remains composed and docile. The passengers don’t get thrown around like tennis balls in a cement mixer unless the pace really picks up, and the volume in the cabin never exceeds indoor voice-like levels.

You can have it your way. The A7, like virtually all modern luxury cars, offers several driving modes that each bring out a different facet of its personality. What surprised us here is that the spread between the modes is surprisingly large.

Comfort mode, for example, lightens up the steering to make the A7 a cinch to maneuver around town, at the expense of feedback at higher speeds. It also reduces the V6’s bite by softening the throttle response and makes the suspension more compliant. Consider it the mother-in-law-friendly mode for when you need to tread lightly.

At the other end of the spectrum, patiently waiting for you to drop off your mother-in-law, is the sport mode. It livens up the A7. The steering gains weight and, unlike Elvis when he got heavier, becomes more communicative. The suspension gets firmer to reduce body lean in corners, and the V6 marches to a different beat. There’s always a noticeable amount of turbo lag but the car quickly overcomes it and rockets forward as the turbos answer roll call with a slight whine. Audi quotes a zero-to-60-mph time of 5.3 seconds; we didn’t time it, but it certainly felt the part.

The spread between the different driving modes, like comfort and sport, is surprisingly large.

It’s possible to shift gears manually by flicking the gear selector or the paddles mounted behind the steering wheel. We tended to agree with the transmission’s decisions so we never used the former and rarely operated the latter. What, you want a manual? Fuhgeddaboudit! Those days are gone, auto-makers are increasingly consigning the stick to the attic. The take rate would be so low that Audi would never recoup its investment. It’s not a coincidence that none of the A7’s rivals offer buyers the option of a manual transmission.

The errant springboks that nonchalantly dart across South African roads need not worry because the A7 brakes as well as it accelerates. We’ve driven cars whose wheels were smaller than the rotors Audi mounts on the A7’s front axle. The sizable hardware brings the A7 to a stop confidently and firmly, with a reassuring amount of feedback from the pedal.

Traffic, like death and taxes, is inevitable. Unless you have the funds to buy a country and kick everyone out, you’re bound to find yourself dancing the stop-and-go waltz sooner or later. We did entering Cape Town. The A7 handled most of the driving, luckily, giving us the opportunity to ogle some of the locally-built cars enduringly idling around us. Did you know Volkswagen made the original Golf until 2009? Google it; it’s fascinating.

Back to the road: the A7 isn’t an autonomous car, and Audi wisely doesn’t market it as such, but it’s a well-mannered co-pilot in dense, low-speed traffic. Left to its own devices, it stays in its lane and automatically follows the flow of traffic. All it asks in return is that the driver remain alert with his or her hands on the steering wheel. It emits visual and audible warnings if it detects you’re not following instructions.

Audi won’t release warranty information until closer to the A7’s on-sale date, which is set for the fourth quarter of this year. For what it’s worth, the current-generation A7 (which has already entered its last model year on the market) comes with a four-year, 50,000-mile warranty and four years of 24-hour roadside assistance.

We won’t see the list of standard and optional features for another few months so it’s difficult to say how we’d configure the 2019 Audi A7. We didn’t select the “product planning” option when we configured our crystal ball, unfortunately. Judging from what we saw at the launch event, we’d select triton blue paint for the exterior and wood trim inside.

In an era where crossovers and SUVs reign supreme, Audi’s all-new 2019 A7 proves the four-door sedan doesn’t have to be a model of dullness. Its mission is to ally style, performance, and comfort. While design is subjective, the A7 ticks the other two boxes by adhering to the time-tested formula of a grand tourer.

This all bodes well for the V8-powered models, respectively called S7 and RS 7, which Audi will introduce in the coming months. The updated 7 family is off to a flying start.