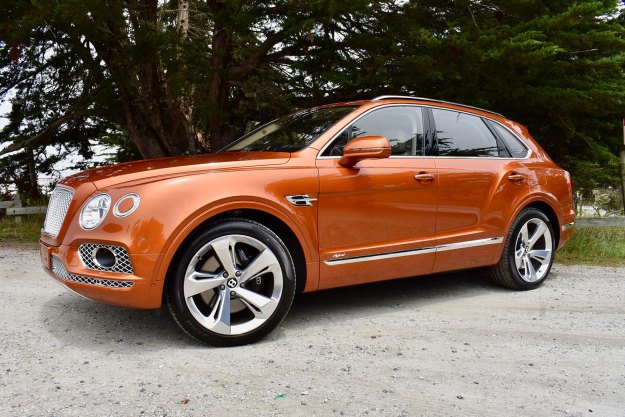 “The Bentayga Hybrid points the way toward an electrified future for this tradition-minded British brand.”

At first glance, a Bentley Bentayga plug-in hybrid seems as oxymoronic as a Mazda Miata delivery van. The Bentayga is a big SUV designed to deliver equally high levels of performance and luxury. That doesn’t leave much room for fuel efficiency.

Yet Bentley’s first SUV is also its first plug-in hybrid. In fact, the 2020 Bentley Bentayga Hybrid (like certain other automakers, Bentley omits “plug-in” from the official name) is the first production Bentley with electric assist of any kind. It points the way for Bentley’s other models, which will all get hybrid powertrains by 2023. With Bentley’s electrified future on the line, engineers needed to get the Bentayga Hybrid right on the first try.

To find out of they succeeded, Digital Trends headed to Silicon Valley, where Bentley arranged a test drive through neighborhoods enriched by the tech industry. Our route took us past Facebook’s headquarters and through Atherton, considered the most expensive ZIP code in the United States. That made it the perfect place to test out the Bentayga Hybrid. It may be the least expensive Bentley, but with a base price of $156,900, it’s still one of the most expensive SUVs on sale today.

Why a plug-in hybrid? Why a Bentayga?

The typical Bentley customer is too wealthy to care about saving money on gas, so why bother with a plug-in hybrid at all? It’s partly down to stricter emissions standards. While U.S. standards have become trapped in political turmoil, Europeand China are pushing ahead with tougher rules. Some European countries have even discussed outright banson sales of new gasoline and diesel cars.

Bentley also has to anticipate changes in customer tastes. Chris Craft, Bentley board member for sales and marketing, told Digital Trends that 30% of luxury-car buyers are interested in electric cars. He also said Bentley plans to launch its first all-electric model in 2025. In the meantime, the Bentayga Hybrid allows Bentley to take a step in that direction, without alienating its more conservative customers. But why start off the electrification push with an SUV?

“At the simplest level, the Bentayga came first,” Peter Guest, Bentley product line director, said. The SUV started development in 2011, and a plug-in hybrid version was part of the plan from day one, Guest said. The Bentayga also offered the added advantage of space. Guest noted that “there’s a lot more room to put the battery pack.”

The most opulent plug-in hybrid around

The only visual differences between the Bentayga Hybrid and other Bentayga variants are discreet “Hybrid” badges, and a charge port located near the rear of the car on the driver’s side. The exterior works very hard to advertise that the Bentayga is a Bentley, borrowing styling cues from the automaker’s models. It’s as if, because the Bentayga was the brand’s first SUV, designers were extra self conscious about making it look like the real deal.

The interior is a step up even from other luxury SUVs.

The interior is a step up even from other luxury SUVs. The steering wheel is perfectly sized, the 22-way power adjustable seats are comfortable, and the interior has a level of craftsmanship not normally seen in other cars. You get plenty of wood and leather, and an attention to detail unmatched by any other SUV, except perhaps the Rolls-Royce Cullinan. For example, each of the 15 pieces of wood trim in every Bentayga is hand selected and cut to fit.

Yet the Bentayga’s cabin could be even better. We drove the Bentayga Hybrid back to back with a Bentley Continental GT V8, and couldn’t help but notice that the SUV’s interior wasn’t quite as upscale as its sibling’s. We saw a lot more plastic trim, for example. Granted, the Bentayga Hybrid’s base price is about $50,000 less than that of the Continental GT, and the difference is something you’d only notice after driving the two together. But we’re just not used to the idea of a Bentley being built to a price.

The Continental GT highlights another issue with the Bentayga. The SUV’s development head start gave engineers time to add the plug-in hybrid powertrain option, but it also meant the Bentayga missed out on the latest infotainment tech. It’s not available with the Continental GT’s digital instrument cluster, or the Bentley Rotating Display, which hides the central touchscreen when not needed. However, rooted in place as it is, the 8.0-inch touchscreen works just fine. The Bentayga is also available with a head-up display, night vision, built-in WiFi hotspot, and two 10.2-inch Android tablets for rear-seat passengers. Bentley offers Apple CarPlay, but not Android Auto.

You have to dig beneath the layers of wood and leather to find the Bentley Bentayga Hybrid’s raison d’etre. The plug-in hybrid powertrain consists of a 3.0-liter turbocharged V6 engine and eight-speed automatic transmission, with an electric motor sandwiched between them. The Hybrid keeps the conventional Bentayga’s standard all-wheel drive, but loses the option of a third row seat. The 13-kilowatt-hour battery pack is housed under the floor in the cavity where the third-row seats would normally fold away, so the Bentayga Hybrid is only available as a four- or five-seater.

Electric range and MPGe are good for a luxury SUV, but they won’t make hypermilers’ pulses race.

Total system output is 443 horsepower and 516 pound-feet of torque. That will haul this massive SUV (it weighs around 5,700 pounds) from zero to 60 mph in 5.2 seconds, and on to a top speed of 158 mph, according to Bentley. That makes this plug-in hybrid the slowest Bentayga; even the diesel version (which isn’t sold in the U.S.) outsprints it. But the numbers are still respectable for such a large vehicle, and are better than what a Range Rover plug-in hybrid can muster. The redesigned Porsche Cayenne E-Hybrid, which goes on sale in the U.S. later this year, is quicker (zero to 60 mph in 4.7 seconds), but its top speed is 1 mph slower than the Bentley.

Acceleration and top speed figures are what make the Bentayga Hybrid a good Bentley, but what about the numbers that make it a good plug-in hybrid? Bentley claims the Bentayga Hybrid can drive up to 16 miles on electric power alone, at speeds up to 84 mph, with an EPA efficiency rating of 50 MPGe. Those are good figures for a luxury SUV, but they won’t make hypermilers’ pulses race. Comparable figures for the Range Rover and Porsche Cayenne plug-in hybrids are not available at this time.

A full recharge from a standard household outlet takes 7.5 hours, according to Bentley. A recharge using a 240-volt Level 2AC source takes a more reasonable 2.5 hours. Bentley does not offer a DC fast-charging option.

The Bentayga Hybrid’s greatest asset isn’t its fuel efficiency or performance – it’s the way it drives.

The electrified powertrain is a perfect match for a Bentley. Its copious torque and smooth, quiet operation are exactly the qualities this revered British automaker is known for. Buyers who think a V6 engine is inadequate compared to the V8 and W12 engines in other Bentley models needn’t worry. With the electric motor pitching in, there is more than enough grunt in real-world traffic. Bentley also noted that the hybrid system always leaves some battery power in reserve, so that electric assist is always available.

The Bentayga Hybrid’s greatest asset isn’t its fuel efficiency or performance. It’s the way it drives.

Driving the Bentayga like a Bentley is great, but driving it like a plug-in hybrid yields mixed results. The SUV has an electric-only mode, but in hybrid mode, pushing the throttle pedal past a certain point automatically turns on the gasoline engine. It’s similar to the kick-down switches in automatic-transmission cars, only you get a burst of internal-combustion power instead of a lower gear.

It’s a fairly straightforward way to manage the interplay of gasoline and electric power, but because the switch is fairly high up in the pedal’s travel, keeping the gasoline engine off requires a light touch. We spent over 90 percent of our (admittedly short) drive on electric power, according to the car’s trip computer, but that was achieved by treating the right pedal like an eggshell. Customers will likely find themselves relying on gasoline power a greater percentage of the time, reducing overall efficiency.

The Bentayga Hybrid does have some tricks to help maximize mpg, though. The hybrid system, adaptive cruise control, and navigation can work together to predict route conditions and determine the most efficient way to drive, according to Bentley. The Bentayga Hybrid is available with other driver aids – including traffic sign recognition and night vision – but nothing as lavish as the top German luxury SUVs.

The Bentayga Hybrid sets itself apart from other luxury SUVs with its finely crafted interior and air of exclusivity, but a pair of other plug-in hybrid SUVs come close to matching it.

Land Rover Range Rover P400e (base price: $95,950): The Range Rover was arguably the vehicle Bentley had to surpass when it launched the Bentayga. Land Rover still offers an impressive combination of luxury, on-road driving dynamics, and off-road capability.

Porsche Cayenne E-Hybrid (base price: $79,900): The Cayenne is a cousin of the Bentayga, as the two share the same basic platform. It fulfills the same basic mission as the Bentley at a lower price, albeit with a bit less luxury.

Bentley offers a three-year warranty with unlimited mileage. Aside from the plug-in powertrain, the Bentayga Hybrid is identical to other Bentayga models. That means it’s still a very complex vehicle with high maintenance standards. As is often the case with high-end, low-volume vehicles, the Bentayga has not received crash-test ratings from the Insurance Institute for Highway Safety (IIHS) or National Highway Traffic Safety Administration (NHTSA).

We would check the box for the City Specification package, in order to get rear cross traffic alert, traffic sign recognition, park assist, and a top-view camera, as well as the Touring Specification package, which adds adaptive cruise control, lane keep assist, head-up display, and night vision. Ventilated and massaging front seats round out our chosen list of options. As with other models, Bentley lets Bentayga Hybrid customers go wildwith exterior color and interior trim options, allowing a greater level of personalization than most other cars. There’s no need to stick with basic black or silver.

The Bentley Bentayga Hybrid isn’t the best plug-in hybrid, nor is it the best Bentayga. It’s a pretty good vehicle, but we expect more than that from Bentley. However, the driving experience bodes well for future electrified Bentley models.