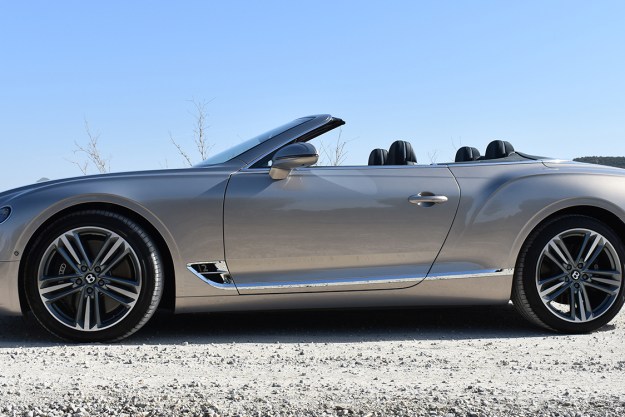 Launched in 2003, the first-generation Continental GT resuscitated the Bentley brand, proving the legendary British automaker was safe in Volkswagen’s hands. Combining luxury and sportiness, that car lived up to the reputation established by legendary Bentley models like the prewar Speed Six and the 1950s R-Type Continental. It was always going to be a tough act to follow.

Bentley launched an extensive update to the original car in 2011, but the Continental GT you see here is the model’s first true clean-sheet redesign. Bentley unveiled a coupe first, and is now launching a convertible version. The automaker brought Digital Trends to Spain to drive latter version from the Mediterranean resort of Malaga to the city of Seville. It was the perfect test of a luxurious long-distance cruiser like the Continental GT.

The new Continental GT convertible looks much sleeker than its predecessor, which was a handsome car that nonetheless had trouble hiding its bulk. Dimensions haven’t changed dramatically, Stefan Sielaff, Bentley design director, noted. It’s all about the proportions and detailing: the new car has a shorter front overhang, but a longer rear, as well as different wheelbase that allowed Bentley to stretch out the hood a bit. Like the Continental GT coupe, the convertible also has headlights made to look like cut crystal, and body panels created using an aluminum super-forming process. It involves heating the metal to 932 degrees Fahrenheit and molding it into shape, leaving creases as sharp and clean as a well-ironed pair of pants.

As with any convertible, the top does eat intro trunk space: the convertible has space for 8.3 cubic feet of stuff, down from the coupe’s 12.6 cubic feet. Owners will probably use the rear seats for additional storage space, as they don’t offer much room for humans. The front seats are quite spacious, as they should be in such a large car. Buyers can specify heated front seats, a heated steering wheel, and neck warmers to make top-down driving in cooler weather possible.

A Bentley is all about the interior. The lavish materials and craftsmanship are on a completely different level from most other luxury cars, with the exception of rival Rolls. Each car features a vast expanse of hand-assembled wood veneer with leather trim held together using over 310,000 stitches and 1.7 miles of thread. Many cars feel expensive but, thanks to Bentley’s attention to detail, the Continental GT is one of the few that feels truly special and desirable.

This time around, the Continental GT gets a digital instrument cluster, a head-up display, and a 12.3-inch central display screen. Based on Bentley cousin Audi’s MMI system, the infotainment system is compatible with Apple CarPlay, but not Android Auto. The system is not as elaborate as the setup in the Mercedes-Benz S-Class Cabriolet, but it’s also not as frustrating to use. Order the optional rotating display, and the screen can be swapped for analog gauges or a plain section of dashboard at the push of a button. After all, who wants to look at a blank screen when the car is turned off? It also lets drivers take a break from digital distractions and just enjoy the experience.

Bentley offers three audio system-options in the Continental GT convertible: a standard, unbranded system with 10 speakers and 650 watts, a 16-speaker, 1,500-watt Bang & Olufsen system, and an 18-speaker, 2,200-watt Naim system. Our test car had the latter, which also features bass transducers under the front seats that have the effect of giving occupants a musical massage. The high levels of bass may not be for everyone, but the clarity and power of the Naim system (which is an $8,670 option) was impressive.

The Continental GT does feature some driver aids, but this did not seem to be a priority for Bentley. Adaptive cruise control, lane keep assist, and autonomous emergency braking are available, but Bentley doesn’t offer anything you won’t find on much cheaper cars. Not that anyone will want to rely on electronic nannies once they slide behind the leather-wrapped steering wheel and feel the rumble of the engine.

The Continental GT convertible uses Bentley’s latest 6.0-liter twin-turbocharged W12 engine, which made its debut in the Bentayga SUV. Essentially two narrow-angle V6 engines fused together, this massive motor produces 626 horsepower and 664 pound-feet of torque. That’s enough to propel the Continental GT from zero to 60 mph in 3.7 seconds, and on to a top speed of 207 mph, according to Bentley. Yup, this 5,322-pound slab of British luxury can top 200 mph.

The Bentley also leaves its rivals in the dust. The Rolls-Royce Dawn, which has a 563-hp twin-turbocharged 6.6-liter V12, can do zero to 60 mph in 4.9 seconds, and is limited to 155 mph. The most potent Mercedes-Benz S-Class Cabriolet also packs twin-turbo V12 power. While the Merc’s 621 hp is close to the Bentley’s output, the German car is three tenths of a second slower to 60 mph, and its top speed is electronically limited to 186 mph.

The engine lays down torque and propels the car to ridiculous speeds with no drama.

It’s not all about the numbers, though. The Bentley W12 is a unique experience. It rumbles like distant thunder, laying down torque and propelling the car to ridiculous speeds with no drama. Roll up on a slower car, and the engine emits a grumble of overrun, like the car is unhappy about being delayed. EPA fuel-economy ratings are not available yet, but the W12 uses cylinder deactivation, which shuts off up to six cylinders under light throttle, and an engine start-stop system to improve efficiency.

Bentley opted for an eight-speed dual-clutch transmission, rather than the torque-converter automatics used in its previous vehicles. Dual-clutch gearboxes can shift faster, but they’re also generally less refined than regular automatics. Bentley felt the tradeoff was worthwhile to give the Continental GT a sportier feel. Our main issue with the new transmission was not refinement, but that it automatically upshifts even in manual mode. Overriding the driver doesn’t jibe with the car’s performance mission.

Also new to the Continental GT is the Bentley Dynamic Ride active suspension system. First seen in the Bentayga, it uses a 48-volt electrical system and electronic actuators to counteract body roll. It makes the Continental GT feel much more agile than a car this big has any right to and, teamed with air springs, it preserves Bentley’s unflappable ride quality. Despite having a fabric convertible top, the Continental GT was library quiet on the inside. With the top down, wind noise was manageable. It’s hard to imagine getting worn even after hundreds of miles of driving, which is the whole point of a true grand tourer.

As before, the Continental GT is available only with all-wheel drive. The system defaults to a 20/80 front/rear torque split in sport mode to give the car a more lively feel, but switches to 40/60 in the tamer Bentley and comfort modes. Torque vectoring shunts torque side to side to help turn the car in corners by applying the brakes on individual wheels. Speaking of the brakes, Bentley opted for cast iron rotors rather than the carbon-ceramic items many other performance cars use. But the Continental’s brakes are enormous, and were more than up to the task of hauling the car down from high speeds.

The Bentley Continental GT competes in a rarefied world of ultra-luxury cars. Its rivals are a case of quality over quantity.

Rolls-Royce Dawn (base price: $335,000): The Dawn is very similar in concept to the Continental GT. Like the Bentley, it’s a big convertible built around a handcrafted interior and a fanatically refined driving experience. But performance wasn’t a priority for Rolls, as it was for Bentley. The Continental GT adds a bit more excitement to the traditional luxury-car formula, something we appreciate.

Mercedes-Benz S-Class Cabriolet (base price: $134,300): Mercedes’ flagship convertible is less expensive than the Bentley, and includes more tech features. But it doesn’t feel as special as the Bentley, and can’t match the British car’s acceleration or handling.

Bentley offers a three-year warranty with unlimited mileage. The Continental GT convertible shares many components with the Bentayga SUV, so things like the engine and 48-volt suspension system are known quantities despite the Continental being an all-new model. Crash-test ratings for the Continental GT convertible are not available at this time, but the car includes industry-standard safety features such as anti-lock brakes and stability control, as well as a rollover protection system.

Our test car came with 21-inch wheels, which are standard equipment on the Continental GT convertible. Bentley does offer 22-inch wheels, but we’d stick with the smaller rims. They fill out the wheel wells nicely, and bigger wheels could have a negative effect on ride quality.

We would also try to personalize “our” car as much as possible. Bentley offers a standard palette of 17 exterior colors, as well as an extended range with up to 70 colors. Buyers can also choose from seven convertible-top colors, 15 carpet options, eight wood veneers, and 15 color options for the interior’s leather hides.

We liked our test car’s Kona wood veneer, and two-tone interior consisting of Camel (tan) and Brunel (gray) leather. But Bentley also offers a deep red leather called burgundy, which also caught our eye, as did darker gray and black options. We would also trade our test car’s extreme silver paint for something more extroverted, like the orange flame (a metallic orange) seen on other cars at the Continental GT media drive. All of this comes down to personal preference, of course.