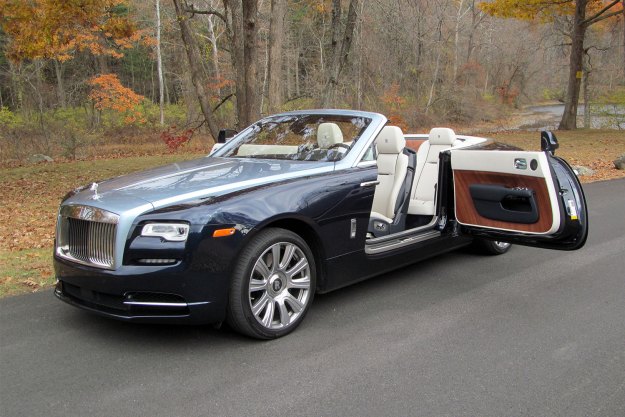 Rolls-Royce doesn’t come out with new models very often, so the introduction of the 2016 Dawn convertible was a very special moment indeed. The Dawn is essentially a convertible version of the Ghost sedan and Wraith coupe, and is currently the only droptop in Rolls’ lineup. Blessed with a few days of convertible-friendly weather in the Northeast, I hopped in Dawn to see whether this newcomer is worthy of the Rolls-Royce name, and how it measures up to the competition.

The Dawn certainly makes a strong first impression. With its massive, upright grille and hood ornament featuring Rolls’ mascot, a woman with outstretched arms known as the “Spirit of Ecstasy,” it’s instantly recognizable as a Rolls-Royce. It’s also gigantic, stretching 17.34 feet from bumper to bumper, about the same length as a Chevy Tahoe.

Just because the Dawn isn’t sporty, that doesn’t mean it isn’t fast.

Rolls manages to make this massive convertible look fairly elegant, though. While the body is fairly thick in the middle, the roofline is nice and low, with a steeply-raked windshield giving the Dawn a sleek look. The body has a refreshing lack of excessive details, and the rear-hinged suicide doors are just about the coolest way to exit a car yet devised.

The Dawn attracts plenty of attention, and with it plenty of opinions on its appearance. Multiple bystanders said the car looked handsome, but lacked the style of older Rolls-Royces. I think they might have a point: the Dawn is not a bad looking car, but it may not be a timeless design either.

An interior you never want to leave

Thanks to its large footprint, the Dawn has a fairly spacious interior, and a well-appointed one at that. Rolls prides itself on the craftsmanship of its interiors, and the Dawn doesn’t disappointed. Every surface is covered in leather and wood trim that’s a cut above the materials in just about any other car. It’s a shame you have to pay this much (the Dawn starts at around $340,000) for something that actually looks like real wood.

The rest of the interior is just as pleasing as its materials. The seats are so comfortable they feel like they belong in someone’s living room, but also offer plenty of support for cornering maneuvers. The thin-rimmed steering wheel and gearshift and turn signal stalks look great, and are wonderful to operate. Impressively for a two-door convertible, there is also enough room in the back seats for (small) adults.

Rolls also offers buyers a couple of features you won’t find in most other cars. That includes the pair of umbrellas that hide in the front door jambs, and something called a “Power Reserve” gauge. It shows you how much power the engine isn’t using, which is a very clever way of showing off.

You’d be excused for thinking the Dawn was powered by an electric motor.

In an age when many new luxury cars inundate their drivers with tech features that aren’t necessarily helpful, the Dawn is refreshingly simple. A 10.25-inch display screen hides behind a wood panel in the center stack, and is controlled via a rotary knob on the center console, ringed by helpful buttons that allow you to jump to different menus. The setup appears fairly similar to the iDrive system of Rolls parent BMW, but more streamlined.

Some tech-savvy buyers might be disappointed at the lack of a digital display in the gauge cluster, as on numerous other cars. Instead, Rolls included a thin display beneath the gauge cluster for things like the odometer reading and idiot lights. The main analog gauges look great though, better than any computer graphics. Unfortunately, the chrome trim does become a bit blinding in direct sunlight, and both digital displays tend to wash out. That’s a bit of oversight on Rolls’ part, especially in a convertible.

No sound, plenty of fury

The Dawn is powered by a 6.6-liter twin-turbocharged V12, a massive engine that sends 563 horsepower and 575 pound-feet of torque to the rear wheels through an eight-speed automatic transmission. But you’d be excused for thinking it was powered by an electric motor.

That’s because, in keeping with Rolls tradition, the Dawn is uncannily quiet. Only a slight murmur from the engine and some minor road noise apparent as it whooshes along. Virtually no mechanical noises can be heard with the top down, and when it’s up, the Dawn’s interior is pretty much sound free. In fact, it’s basically sensation free: the suspension does such a good job of absorbing bumps that you could run over a peasant and never know it.

This means the Dawn is a supremely comfortable car, but not a sporty one. The driving experience is certainly satisfying, but this isn’t a car built for attacking twisty roads. Still, despite being tuned for comfort, the Dawn didn’t exhibit body roll in corners, the steering provides a decent amount of feedback, and the brakes perform fairly well at the unenviable task of stopping 5,644 pounds of car.

Just because the Dawn isn’t sporty, that doesn’t mean it isn’t fast. Rolls says it will do 0 to 60 mph in 4.9 seconds, and the top speed is electronically limited to 155 mph. Given the size of the engine and the amount of weight it has to push around, the Dawn’s 563 hp doesn’t initially sound that impressive. But whenever you need to get moving in a hurry, it delivers, whisking you away on a smooth and steady stream of torque.

The 2016 Rolls-Royce Dawn is a fast and fabulous convertible with impeccable road manners and a luxurious interior. It emphasizes traditional luxury-car attributes at the expense of performance and value.

The Dawn has very few direct competitors, but one of them is arguably the Mercedes-Benz S-Class Cabriolet. Like the Dawn, it’s a big, luxurious, four-seat convertible. The S-Class is much less expensive and boasts a greater array of tech features, but isn’t in really in the same class (pun not intended) as the Dawn when it comes to interior quality, and generally doesn’t feel as special.

The Bentley Continental GT is arguably the Dawn’s closest rival. Where the Rolls focuses on quietness and comfort, the Bentley is genuinely sporty, with more responsive steering and brakes. It’s also quicker to 60 mph, and has a higher top speed.

The Bentley may be more of a hot rod than the Rolls, but it’s an older design, and that shows in a somewhat lower level of refinement, and less-sophisticated tech offerings. The choice between the two basically depends on whether you want to emphasize performance, or luxury.

The Dawn is an-all new model, so it should remain up to date for quite some time. It’s based on the Ghost sedan and Wraith coupe, both of which have been around for a few years, but given the length of automotive development cycles, don’t expect a redesigned model to usurp the Dawn for a while.

If you have the money, and prefer serene cruising to maximum-attack driving, then the 2016 Rolls-Royce Dawn is for you. It may not be the sportiest or most practical car, but the Dawn certainly lives up to the Rolls-Royce name.