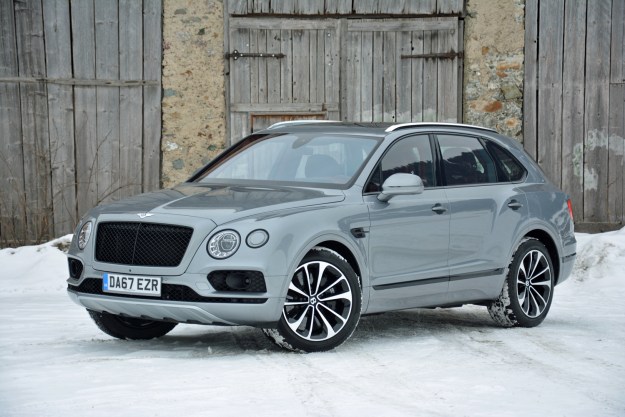 “We love the 12-cylinder engine, but the V8 is the best Bentayga variant yet.”

The entry-level Bentayga Bentley promised us three years ago has arrived. You didn’t expect steel wheels and hubcaps, did you? The new variant gets eight cylinders instead of 12 and a handful of minor visual tweaks. For our 2019 Bentley Bentayga V8 first drive review, we traveled to the Austrian Alps to find out how it compares to the mighty W12 model.

The Bentayga is a mono-spec model; Bentley doesn’t offer trim levels in the conventional sense of the term. Buyers simply choose a car, pile on options, personalize it if they wish, and sign the dotted line. That’s how a transaction normally happens in this segment of the market. The extra-cost options add up fast, but the good news is the Bentayga comes with a long list of standard features. It includes an adjustable air suspension, 20-inch alloy wheels, LED lighting, a panoramic roof, a 10-speaker audio system, an eight-inch touch screen with navigation, voice commands, text-to-speed, and an SD card slot. There’s a 60GB hard drive to back up the infotainment system and store media files.

Pricing starts at around $165,000, which makes the V8 a real bargain in the grand scheme of things. Why? Well, consider this: the W12 kicks off at roughly $230,000. The difference between the two is enough to buy a Porsche Cayman.

Other models in the V8’s competitive set include high-end variants of the Land Rover Range Rover and, if you’re the option-ticking kind, the recently-introduced Lamborghini Urus. The Urus and the Bentayga are actually distant cousins, but they’re two different animals.

Heads-up, car spotters. The Bentayga V8 stands out from the Bentayga W12 with gloss black trim all around. It’s on the grille, on the fender vents, around the windows, and on the light bezels found on both ends. The eight-cylinder engine also exhales through engine-specific exhaust tips. Inside, the two models are all but identical. Note the V8 is offered with high-gloss carbon fiber trim, a first in Bentley-land.

Bentley gifted the Bentayga with an interior so lavish we’re a little surprised it doesn’t have a sauna and a caviar bar. We called the W12 model the most luxurious SUV on the market and the V8-powered version is no different. Mirror-matched pieces of wood complement the soft leather upholstery that swathes the seats, the dashboard, and the door panels. The materials are authentic. If it looks like leather, it is; if it looks like metal, it is, too. The exception to the rule are the buttons on the steering wheel, which reveal the SUV’s Audi origins. There are other posh 4x4s on the market, including the aforementioned Range Rover, but the Bentayga represents the cream of the crop when it comes to craftsmanship.

An eight-inch touch screen embedded in the center stack displays the infotainment system. It’s a relatively straight-forward, easy to use software with menus that are clearly labeled plus redundant buttons and knobs on either side of screen. It’s everything you expect from an infotainment system and nothing you don’t. Apple CarPlay compatibility comes standard, for all you iPhone fans, but the system isn’t compatible with Android Auto and it most likely won’t be anytime soon.

The rear-seat entertainment system ensures the rear passengers stay connected, too. We’ve seen screens attached to the front seatbacks before. You’ll undoubtedly remember the phenomenal coolness of the in-car VCR if you grew up in the 1990s. This is not that. These are 10.2-inch Android-based tablets that provide internet access via the car’s Wi-Fi connection, plus trip updates while letting the passengers in the back select their own entertainment.

Bentley gifted the Bentayga with an interior so lavish we’re surprised it doesn’t have a sauna and a caviar bar.

The best part of the rear-seat entertainment system is a little smartphone-sized remote cleverly integrated into the back of the center console. It pops out at the push of a button. With it, the passengers can check the outside temperature, change the climate control settings, turn on the seat’s heating, cooling, or massaging functions, and more. It’s in-car cocooning at its best.

There are two basic ways to spec the Bentayga’s interior. The first configuration brings five seats, while the list of options includes a more comfort-oriented four-seater layout. Passenger space is ample in both configurations. Cargo capacity, however, is not the Bentayga’s strongest point. The standard five-seater boasts 17.1 cubic feet of trunk space, while the four-seater comes with only 15.2 cubes. In comparison, the Range Rover stands proud with its 32.1 cubic feet.

The Bentayga’s wide grille hides a twin-turbocharged, 4.0-liter V8 engine closely related to the eight-cylinder that powers Porsche’s Cayenne and Panamera models and the Lamborghini Urus. All three companies operate under the same umbrella. Bentley applied its in-house magic to the V8 to extract 542 horsepower at 6,000 rpm and 568 pound-feet of torque over a wide band that stretches between 1,960 and 4,500 rpm. An eight-speed automatic transmission channels power to the four wheels.

To add context, the Bentayga’s other engine is a twin-turbocharged 6.0-liter W12 with 600 horsepower and an impressive 664 pound-feet of torque. Walk across the street to Land Rover and you can drive away in a Range Rover with 565 horses and 516 pound-feet of twist.

This concoction of metal, leather, wood, and oily bits tips the scale on the wrong side of 5,200 pounds. Convert that to timber and you could build one helluva barn. You’d understandably expect it to take a turn like a Forlanini airship from the early 20th century, but you’d be dead wrong. The Bentayga handles better than any SUV ought to. It takes turn with virtually no body roll thanks largely to the available anti-roll technology fed by a 48-volt electrical system. It essentially uses electricity to prop up the SUV as it tries to lean into a bend. The front end feels lighter, too. Though not exactly a lightweight, the V8 engine weighs less than the W12. It’s like removing a few bags of cement from the hood.

The V8 makes its presence known, which we like; we found the W12 too quiet when we drove it. It propels the Bentayga from zero to 60 mph in 4.4 seconds, according to Bentley. We verified that figure just for kicks and, fear not, it’s accurate. But, how often do you drive like that in real life? Rarely, if ever. More important, then, is the peak torque that blasts through the driveline relatively low in the rev range. The power is there when you need it, always in a controlled way and never overwhelming.

The Bentayga V8 weighs about 5,200 pounds. Convert that to timber and you could build one helluva barn.

The optional carbon-ceramic brakes deserve a special mention. If you’re willing to foot the bill, Bentley will build your Bentayga with the largest front brake system available on a production car today, regardless of market segment or price. Gargantuan, 10-piston brake calipers slow the SUV. If that’s gibberish, just keep in mind the average family car uses calipers with a single piston. Our test car came equipped with this option, which isn’t cheap, and we watched with near-superstitious awe as it came to a stop like we’d just hit a mile marker on the side of the road.

Driving aids like adaptive cruise control and lane-keeping assist work as-advertised. We decided not to try out the collision avoidance system to avoid causing a very expensive mess in a very expensive car – and placing a very embarrassing phone call to a Bentley representative.

Our time behind the wheel was too short to measure real-world fuel economy.

Like the W12-powered model, the Bentayga V8 comes with a three-year warranty with no mileage limitations. Bentley began building the Bentayga three years ago, and the V8 model shares its engine with other models, so there’s nothing awfully unpredictable about it in terms of reliability.

If we were spending our own money, we’d tick a few boxes on the list of options. We’d order the all-terrain specification, which adds goodies like a top-view camera and skid plates. We’d also get the city specification to add park assist, pedestrian warning, and traffic-sign recognition. And, sign us up for the high-performance audio system. Finally, we’d order ours in Alpine Green with the grey twin-spoke, 21-inch wheels. We’d skip the carbon fiber trim on the dashboard and instead select the liquid amber veneer, which goes well with the dark green we selected for the body.

Though the Bentayga V8 lacks the prestige of the W12-powered flagship, it’s not a conventional entry-level model by any stretch of the imagination. It’s just as luxurious – and very nearly as fast – as its range-topping sibling. It’s also sharper to drive, more efficient, and considerably more affordable. We love the 12-cylinder, and we wish it a long, healthy life so our kids can enjoy one someday, but the V8 is the best Bentayga variant yet. It’s also not the last variant, as we found out during the Geneva auto show, so time will tell if it retains its crown.

We need more 7-passenger EVs, but the 2023 Mercedes EQS SUV has room to improve
Lux and refreshingly livable, Mercedes’ EQE moves EVs mainstream
2024 Chevrolet Equinox EV aims for affordability with $30,000 base price
Jeep is launching its first two electric SUVs in the U.S. in 2024
The Uber hack is an outrageous tale of a teen hacking for fun
Tesla to fix window software on 1M of its U.S. cars
How to watch Tesla’s AI Day tonight and what to expect
2023 Audi Q4 E-Tron first drive: the predictable and traditional EV SUV we need
Tesla AI Day 2022: Optimus, self driving cars, and everything else announced
Tesla hopes full self-driving beta will be out globally by the end of 2022
Elon Musk reveals first delivery date and customer for Tesla Semi truck
Nissan wants the 2023 Ariya to be its comeback EV, but the bar has been raised
2023 Kia Niro EV first drive review: Practical doesn’t have to bore you to tears