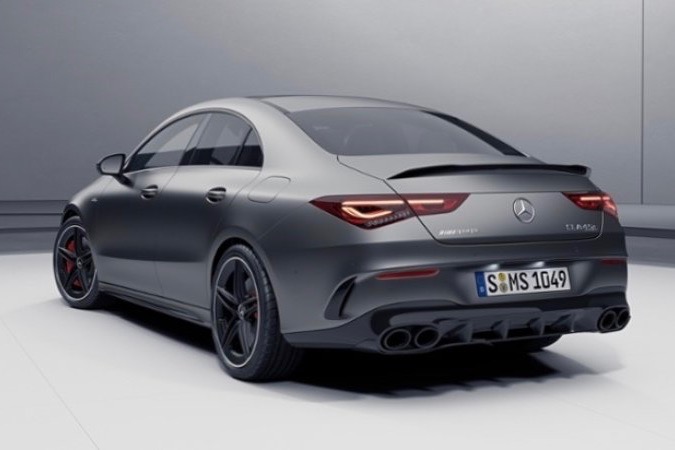 Mercedes-Benz has already revealed two versions of its redesigned CLA compact four-door: The base CLA250 and the sportier AMG CLA35. But there’s one more version on the way, and it’s making its first appearance earlier than expected. Auto Bild and Motor1 spotted a leaked photo of that car, the 2020 Mercedes-AMG CLA45, on Mercedes’ own German website.

The photo in question appeared in the online configurator for the CLA35. The website initially shows a yellow CLA35, but clicking on the section detailing an optional Night Package brings up a photo of the rear of the CLA45. The badging gives it away, as do subtle differences like quad exhaust tips (the CLA35 only has two exhaust tips), different wheels, and red-painted brake calipers. We don’t know what the front looks like, but it will likely feature more aggressive styling to further differentiate the CLA45 from the CLA35 and could possibly include the Panamericana grille used on other AMG models like the GT four-door coupe.

The CLA45 likely won’t get a proper unveiling until later this year, but it should be worth the wait. The current-generation CLA45’s 2.0-liter turbocharged four-cylinder engine already produces 375 horsepower — quite a lot for such a small engine. The redesigned CLA45 is expected to continue using a 2.0-liter turbo four, but with output pushed to 385 hp in the base model and 415 hp in the range-topping CLA45 S, reports Car and Driver.

All-wheel drive is expected to be standard, but Car and Driver also reports that the S model will get a rear-wheel drive “drift mode,” similar to the AMG E63. Pricing will be revealed at a later date, but expect the CLA45 to command a significant premium over the CLA35.

Mercedes-AMG will likely wait until after the unveiling of the European market A45 hatchback before fully revealing the CLA45, following its pattern of revealing A-Class variants before their CLA counterparts. The CLA and A-Class have different styling, but share virtually everything else under the skin. The United States gets an A-Class sedan, rather than the hatchback, but it’s unclear if an AMG A45 sedan will be sold here. That would fit Mercedes’ tendency to build seemingly endless variants to fill every conceivable market niche.