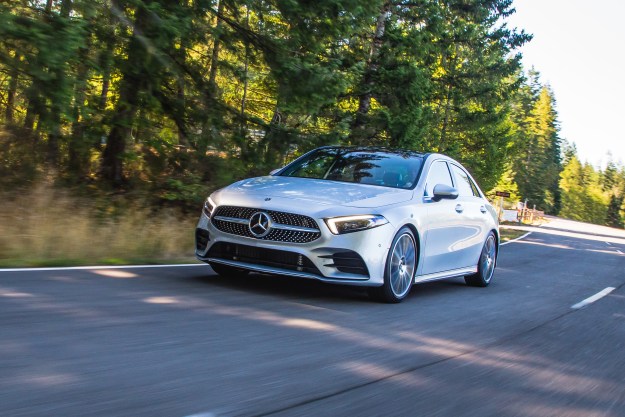 “The Mercedes-Benz A-Class sedan offers tech and style that you can’t find elsewhere in its class.”

In marketing 101, students often learn to “start ‘em young.” It’s the golden ticket to securing brand loyalty for life and a successful marketing campaign. Mercedes-Benz isn’t known for making affordable automobiles so it has a difficult time reaching younger buyers. Its cars are priced for people who tend to hover in the same age bracket as those ready to cash out their 401K.

The company realized it was possible to speak to the young – not just the young at heart – with the original baby Benz in the 1980s, the 190. It was the precursor to the modern C-Class. Though the C-Class has since matured, Mercedes again tried reaching younger motorists with the CLA in 2013. While it was a nicely-packaged vehicle, it suffered from a variety of fundamental flaws.

To try once more, the company decided to import one of its most affordable models to the United States, the all-new 2019 A-Class sedan. We sampled it while exploring the Pacific Northwest’s signature city: Seattle. Prior to the 2019 model year, the A-Class was only available in Europe and Asia, where it sold by the millions over three generations and 20 years. And that’s because the executives at Mercedes-Benz didn’t think such a model aligned with the company’s image here in America.

But times have changed and the new A-Class sedan arrives in dealers in early 2019, not only to prove that sedans aren’t dead yet, but also to take on the Audi A3 while swaying new buyers away from the competitors. Pricing isn’t available yet, but Mercedes-Benz representatives said to expect a starting price somewhere in the mid-$30,000 range.

For decades, Mercedes maintained a tradition of revealing its latest innovations on flagship models, like the far more expensive S-Class and E-Class sedans. But with a desire to put its technological advancements in a brighter spotlight, the company now introduces them in its more affordable models. By making its newest tech more reachable, the automaker believes it will make a far more lasting impression on younger buyers. That’s why it decided to inaugurate its latest infotainment system and digital personal driving assistant in the A-Class.

Called Mercedes-Benz User Xperience (MBUX), the infotainment system adopts a high-definition dual-screen configuration that replaces the gauge cluster and the center console display. It’s similar to the layout found in the A-Class’s more expensive siblings. MBUX is standard across the A-Class lineup, complete with Android Auto and Apple CarPlay connectivity. The base system comes with smaller seven-inch screens while paying extra for the more advanced system adds the much larger 10-inch displays shown on our test car.

By making its newest tech more reachable, Mercedes believes it will make a lasting impression with younger buyers.

Along with the new system comes a new user interface. There’s Alexa- or Siri-like voice command with natural speech recognition, activated by announcing “Hey Mercedes,” and a new central touchpad controller that replaces the traditional dial. And, for the first time in a Mercedes-Benz, MBUX combines both an external controller and touchscreen for easy navigation.

Software engineers simplified all the menu and option selections within the graphical user interface, organizing them in a navigable way that’s fairly logical, especially for a vehicle with so many features.

Testing the “Hey Mercedes” function and its natural speech recognition, the system eliminates the need to speak like a robot in order to work. Rather, the system is programmed to recognize more conversational requests. For instance, instead of saying, “Hey Mercedes, raise driver’s side temperature to 71 degrees,” the passengers can simply express what they’re feeling and the car will obey. Like, “Hey Mercedes, I’m cold.”

Alternatively, when craving a cup of joe in the city home to Starbucks, we simply said, “Hey Mercedes, I want some coffee,” and the system pulled up the nearest shop options based on top Yelp reviews.

The only pressing issue we found was that the system was often annoyingly and unintentionally triggered whenever we inadvertently said the word Mercedes.

The A-Class boasts an interior that’s surprisingly spacious and comfortable.

Optional equipment includes a solid Burmester high-end sound system, heated and cooled front seats, navigation with augmented reality (which displays a forward view on the center display with directional overlays), an inductive charging station for compatible smartphones, and the same Distronic Plus radar-guided cruise control with self-steering function and route-based speed adaptation that’s found on the more luxurious E-Class and S-Class models. Choose the driver and parking packages and they’ll bundle up safety features like blind-spot and lane-keeping assist plus pedestrian, forward collision, and intersection cross-traffic detection, all with automatic braking.

Despite being a subcompact sedan, the A-Class boasts an interior that’s surprisingly spacious and comfortable. Though, naturally, those breaking the six-foot figure will find the rear quarters a bit cramped with some slight difficulties with entering and exiting. Otherwise, the interior is as solid and well-built as any other model in the lineup.

At launch, the A-Class launches with one trim level and one engine choice. It’s called A220. Driving either the front wheels or all four is a transversally-mounted, 2.0-liter, turbocharged four-cylinder bolted to a rather lethargic but fairly smooth seven-speed dual-clutch automatic. Official 0-60 times aren’t yet available, but from what it felt like behind the wheel we estimate that time to be in the sub-seven-second range with just a hint of turbo lag. Once in the engine’s power band, the A220 hustles more than adequately around town and on the highway with plenty of passing power.

The A sports agile handling, with a quick and accurate front-end, nicely tuned brakes, and a firm yet, compliant ride.

Though it’s a dual-clutch unit, the A220’s transmission performs like a traditional automatic with a torque converter. It delivers slow up and downshifts by dual-clutch standards. It can’t match the quickness of the dual-clutch in comparable Audi models, even when it’s in sport mode. And yet, it manages to be one of the smoother dual-clutches we’ve sampled as of late, especially considering the transmission’s reputation for being a bit clunky around town. We imagine the faster-shifting transmission is being reserved for the high-performance A45 AMG, if it comes to the United States.

While the A-Class is front-wheel drive-based with a short-wheelbase, it sports agile handling with a quick and accurate front-end, nicely tuned brakes, and a firm yet compliant ride with well-sorted body control. The rear-end, however, can feel a bit bouncy over wavy roads. The larger wheels and more aggressive tire package made for quite a bit more tire roar noise than we were expecting from a brand known for serene interiors. But, all things considered, it does drive and feel like a Mercedes-Benz from behind the wheel.

All Mercedes-Benzes come with a 48-month, 50,000-mile warranty that covers the vehicle bumper-to-bumper. There’s a factory-extended option which adds 36 months and 100,000 miles worth of coverage.

In the J.D. Power Initial Quality Survey for 2018, Mercedes-Benz ranked in at only having 92 problems per 100 vehicles manufactured new, just below the industry average of 93 problems. That figure is down from last year’s number of 102 problems, suggesting a considerable improvement in vehicle reliability right off the assembly line.

Mercedes-Benzes in general have a reputation for being stoutly robust and over-engineered. And when cared for, they’re also known for reliability and longevity.

We would take the 2019 Mercedes-Benz A-Class sedan as we experienced it during the press launch in Seattle: fully loaded. That includes the more advanced MBUX system with the larger 10-inch screens, which is part of the premium package, the sportier AMG Line package with sport-tuned suspension, steering, and brakes, plus the driver assistance package, which adds the clever Distronic Plus radar-guided cruise-control and all of the active safety gear. The Burmester sound system is worth the upgrade and, to make the most of the MBUX, it’s important to opt for its sat-nav capabilities.

If you’re in the younger age bracket and the prospect of owning a car as luxurious and feature-rich as a Mercedes-Benz seems impossible, that prospect might now be able to become a reality. While the A-Class is the company’s most affordable model, that doesn’t mean it feels cheap in any way. Rather, it feels like the premium product that it is.

The 2019 Mercedes-Benz A-Class sedan is hugely impressive and a significant improvement over the CLA in a variety of ways. It offers a level of tech and style that not even its direct competitor, the Audi A3, can match. But the biggest determinant of the A-Class’s success is its price. Until we find out how truly expensive the A-Class testers were as equipped on the press drive, it’s hard to say if the A-Class will be a smash hit.

But, if it manages to remain as affordable as the Mercedes-Benz representatives implied, then the company will have a winner on its hands.

Nissan wants the 2023 Ariya to be its comeback EV, but the bar has been raised
Elon Musk reveals first delivery date and customer for Tesla Semi truck
We need more 7-passenger EVs, but the 2023 Mercedes EQS SUV has room to improve
Lux and refreshingly livable, Mercedes’ EQE moves EVs mainstream
Cruise’s robot taxis head to Arizona and Texas
Uber says it’s investigating ‘cybersecurity incident’
Nvidia’s Drive Concierge will fill your car with screens
The Uber hack is an outrageous tale of a teen hacking for fun
Tesla to fix window software on 1M of its U.S. cars
How to watch Tesla’s AI Day tonight and what to expect
2023 Audi Q4 E-Tron first drive: the predictable and traditional EV SUV we need
Tesla AI Day 2022: Optimus, self driving cars, and everything else announced
Tesla hopes full self-driving beta will be out globally by the end of 2022