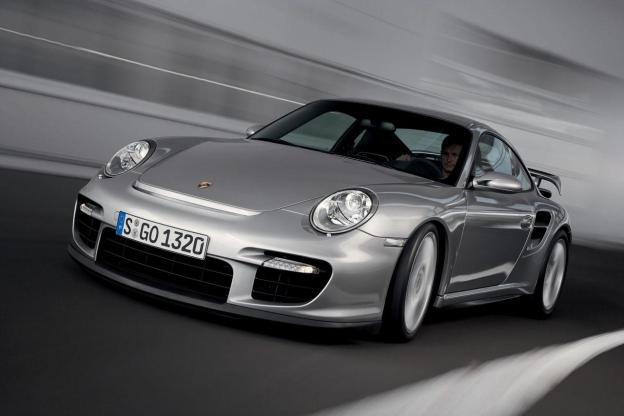 The Porsche 911 rollout parade is in full swing. Celebrating the 911’s 50th year the right way, Porsche has already shown new versions of the 911 Turbo and GT3, and details of the next high performance Porsche sports car, the GT2, are already starting to leak out.

Like the GT3 and Turbo, the GT2 will make the switch from its current 997 platform (pictured) to the new 991 platform in the near future. According to Autocar, the headline for this car will be a 552 horsepower version of the Turbo’s flat-six.

That means 3.8-liters, two turbochargers, and direct injection. As with the Turbo, Posche’s PDK dual-clutch automatic gearbox will probably be the only transmission choice.

That sounds impressive, but it actually isn’t. Porsche is already planning on offering a 911 Turbo S with 560 hp, topping the GT2 by eight ponies. It will do 0 to 60 mph in 2.9 seconds and reach a top speed of 198 mph.

So why buy a GT2 over a Turbo? Assuming Porsche doesn’t come out with a revised, higher power rating for the GT2 between now and its launch, the difference will mainly be one of character.

As with all previous GT2s, the 991 model will ditch the Turbo’s all-wheel drive system for rear-wheel drive. That means the GT2 will be lighter and more responsive, but also more challenging to drive. The Turbo’s new four-wheel steering system will be included.

Like the GT3, the GT2 will also be a hardcore model, emphasizing performance over luxury. That means buyers can expect reinforced brakes and suspension, but fewer luxuries.

So perhaps it’s best to think of the GT2 as a GT3 with turbos, instead of a 911 Turbo Plus.

Regardless of its exact place in the 911 pecking order, the GT2 will likely face the same criticism as the other 991 911 models.

The latest generation of 911 is by far the most high-tech, with electric power steering a preference for PDK on all but base models. That might make the cars faster and easier to drive, but it won’t endear them with fans like their predecessors.

Will the GT2 buck the trend? Stay tuned as Porsche gets ready to launch this latest addition to the 911 lineup.