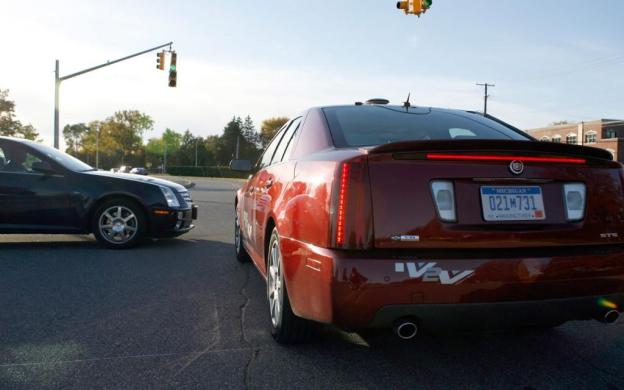 After investigating school bus crashes that left students dead in New Jersey and Florida, the National Transportation Safety Board (NTSB) concluded that they might have been prevented if the vehicles involved had been able to somehow communicate to each other using some sort of automated technology.

Both crashes involved trucks colliding with the school buses at intersections. The NTSB believes that vehicle-to-vehicle communication (V2V) technology, which allows networked vehicles in close proximity to transmit information between each other, could have made a difference.

“This technology more than anything else holds great promise to protect lives and prevent injuries,” Deborah Hersman, NTSB chairperson, said at a board meeting Tuesday.

In its report on the New Jersey and Florida crashes, the NTSB recommends that the National Highway Traffic Safety Administration (NHTSA) begin the process of mandating V2V.

The NTSB called on NHTSA to “develop minimum performance standards for connected vehicle technology for all highway vehicles.”

Once those standards are established, the NTSB recommends that manufacturers be required to install V2V in all new vehicles.

From collapsible steering columns to traction control, new cars are full of government-mandated safety gear. How will V2V change things?

V2V allows vehicles to communicate with their surroundings and each other, widening the range of perception beyond a driver’s eyeballs.

If a car could act as a second set of eyes, it could theoretically cut down on crashes caused by distraction or low visibility. A V2V-equipped car could, for example, see a deer run into the road before the driver does, or see someone running a stop sign at an oblique intersection and warn the driver.

Many of V2V’s other potential features are already becoming common in new cars. A V2V system could warn a driver if a car in front stops short and detect cars in a driver’s blind spot.

However, while V2V does make cars self-aware, it still leaves the driver in control. The systems currently being tested alert drivers of potential danger, but the humans are the ones reacting.

It wouldn’t be too hard to connect the awareness of V2V to limited autonomous driving functions; it’s already being done with the automatic braking and lane keep assist features, which can steer a car back in course, offered in many new cars. These safety features use onboard sensors to detect danger, just like V2V, but give that information to the car instead of the driver. It would be a small step to share that data with nearby vehicles.

For now, though, policymakers feel V2V will make a big difference on its own. The NHTSA believes V2V can prevent 80 percent of crashes where driver impairment isn’t a factor.

“This is a game-changer for transportation,” said Jim Sayer, an associate research scientist at the University of Michigan Transportation Research Institute (UMTRI), on the eve of a massive V2V field test.

The Safety Pilot Model Deployment, currently being conducted on the roads around Ann Arbor, Michigan, consists of a fleet of 2,850 vehicles, as well as sensors embedded in the region’s major highways and at several urban intersections. Conducted by the U.S. Department of Transportation (DOT), the NHTSA, and UMTRI, it could determine if the NTSB’s V2V mandate recommendation is feasible.

How does V2V work?  At this time, the technology is still in its infancy and there are no industry standards. However, trends are beginning to emerge.

All current V2V systems use Dedicated Short Range Communication (DSRC), a type of wireless signal in the same range as Wi-Fi. This has become the de facto standard because its signal has a relatively long range (the system in the Michigan test is good for up to 300 meters) and, unlike radar, it can be transmitted through solid objects like buildings.

In the DOT/NHTSA/UMTRI Michigan test, sensors in the cars and infrastructure transmit their speeds and locations to each other, allowing each vehicle to keep track of where everything else is. If an obstacle is detected, the vehicles alert their drivers with beeps, flashes, or steering wheel and seat vibrations.

Notably, the Michigan coalition is testing both embedded V2V devices, replicating what an OEM might install, and “aftermarket safety devices” that could potentially be retrofitted to any car, whether it comes with V2V from the factory or not.

The vehicle’s in Michigan’s Safety Pilot Model Deployment have been retrofitted with V2V equipment from Cohda Wireless and Savari, but carmakers are preparing systems of their own.

Ford’s “Electronic Brake Light” warns drivers in stop-and-go traffic if the car in front of them is braking, with a light on the dashboard, supplementing the one above the preceding car’s tailgate. The Blue Oval tested the system on 20 S-Max minivans in Germany last month as part of simTD (Safe and Intelligent Mobility – Test Field Germany). PDF

BMW also tested a suite of V2V tech at simTD. “Cross Traffic Assistant” monitors the road ahead for obstructions and uses visual and audio warnings to alert the driver. “Traffic Sign Assistant” warns of upcoming speed limit changes or congestion. BMW tested both systems on 120 vehicles at simTD.

The Ford and BMW systems would have to be embedded into new cars, but Mercedes-Benz is working on a system that could be easily retrofitted to existing vehicles.

Simply called Car-to-X (another generic name for V2V tech), it will basically function as an information router for the driver. The system will read warnings from emergency services, and take advantages of the many sensors that come packaged in Mercedes cars, transmitting information on road conditions to other cars in the network.

Car-to-X will be flexible because it won’t require any extra hardware. Drivers will use a smartphone app called Digital DriveStyle to connect their cars. However, the system will only work with Mercedes vehicles.

These are just a few possible permutations of V2V. Audi, General Motors, and Volkswagen are also reportedly working on systems of their own.

Let’s say the NHTSA really does mandate V2V: how would that change driving? Would it really make the roads safer, or would it just give drivers a technological excuse to not pay attention?

At first, it might actually be hard to tell. V2V only works if every car in the vicinity has the tech; otherwise they will be undetectable. Like crowd sourcing, the system requires a large pool of information to be effective.

As with past mandates for safety equipment such as airbags, anti-lock brakes, and traction control, or low emissions levels, a V2V mandate would only apply to new cars. The wrinkle is that, unlike airbags, V2V could be installed in older cars relatively easily. Given the precedent though, it seems unlikely that the NHTSA will force people to retrofit their cars. V2V-equipped cars will probably be in the minority for some time.

The people that do buy new cars could face another issue: privacy. V2V-equipped cars constantly transmit their location and speed, which sounds like perfect fodder for an Orwellian scenario. UMTRI says its devices and Dedicated Short Range signal are tamper-proof, but it could still make some drivers uneasy.

Big Brother aside, what will V2V-equipped cars be like to drive? Quite normal, probably. The driver will always be in control of the vehicle and will still be responsible for keeping it pointed the right way. V2V will only intervene when it senses something bad about to happen.

When that something happens, the car will warn its driver with a light on the dashboard, a beep, or possibly by vibrating the seat or steering wheel.

Even that, though, wouldn’t be too different from what drivers currently experience in cars equipped with blind spot and lane departure warning systems, which also use beeps and flashing lights to warn us fleshbags of potential collisions.

The difference is that V2V would work more often. Even when the car isn’t moving, it would be checking for potential obstacles and telling other vehicles its location, and it wouldn’t be limited to specific scenarios such as stop-and-go traffic or lane changes. Driving is unpredictable; V2V’s flexibility could be its biggest benefit.

V2V will make cars more aware of their surroundings than their drivers, but does that mean they don’t need drivers? Is V2V a step toward autonomous cars?

So far, the answer seems to be “no.” After all, Google, Audi and others are already testing fully autonomous cars in a line of parallel development to V2V; the NHTSA is encouraging testing of both concepts.

V2V may very well develop into an alternative to fully automated cars. Even combined with limited autonomous functions like automatic braking, V2V-equipped cars won’t be able to orient themselves among non-transmitting cars and objects. Autonomous cars do this with GPS and radar, but V2V cars can only read their own DSRC network.

Consequently, building a Google-style robot car from scratch would be easier than converting a V2V model. The latter gathers information that is relevant to a human driver, but not enough for a car to drive itself 100 percent of the time.

If it performs as advertised, V2V could be a good balance between using digital tech to make driving safer and taking control of cars away from human beings as if they were irresponsible children.

An NTSB mandate could change the way we drive, but not by that much. Will it be able to prevent an errant truck from T-boning a school bus? There is still much testing to be done before policymakers, and the public, will be able to find out.

Would you buy a car with V2V technology? Let us know what you think about the idea in comments.