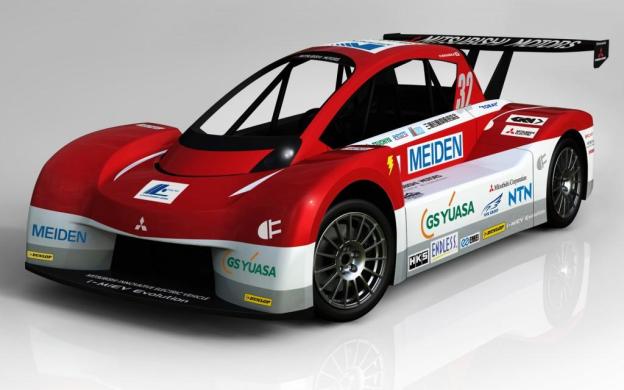 It takes more than door numbers and sponsor decals to make a race car, as Mitsubishi is proving with its latest project. The egg-shaped iMiEV (a.k.a. Mitsubishi i) electric car may be rear-engined/rear-wheel drive, just like a Porsche 911, but other than that it is the antithesis of sporty. Mitsubishi must have something to prove, because the Japanese company will enter an i-MiEV Evolution racer in the upcoming Pikes Peak International Hill Climb.

Helping the i-MiEV racecar up the hill will be three electric motors. They produce a combined 322 horsepower and drive all four wheels, which should give the Mitsubishi the grip it needs to avoid plummeting off cliffs. One motor powers the front wheels, while the other two power the rear wheels. To match the increase in horsepower, the i-MiEV’s battery pack gets a boost from 16 kWh to 35.

Mitsubishi also made some radical modifications to the i-MiEV’s body to prepare it for racing. A stock i-MiEV is very narrow (it actually had to be widened to suit U.S. customers), yet tall, which creates a high center of gravity. To keep the i-MiEV Evo from flipping over, Mitsubishi widened it. The racer’s body may look like someone strapped pontoons to a stock iMiEV, but it will also be more aerodynamic and, thanks to carbon fiber construction, very light.

The i-MiEV Evolution will need to improve on the stock i’s performance figures if Mitsubishi wants it to win. The car civilians buy weighs about 2,600 pounds, and has 66 hp. That’s good enough for a 0-60 mph time of 13.0 seconds, and a top speed of 80 mph.

The i-MiEV Evolution should be faster than that, but it will still be up against some tough competition. This year, Pikes Peak will have a class specifically for electric vehicles. Reigning champion Nobuhiro “Monster” Tajima will be entering a purpose-built electric racer of his own.

First run in 1916, the Pikes Peak International Hill Climb challenges racers to reach the summit of its namesake Colorado mountain in the fastest time possible. The track climbs 4,721 feet in 12.42 miles. The race is made more treacherous by the fact that, if a driver misses a corner, instead of sand and a tire wall, they will be met with a sheer cliff.

If the i-MiEV Evolution does well, it might cast a little glow on the plebeian i. Electric cars are great for the environment, but they are not exactly “cool.” That is especially true of a car with only 66 hp that’s barely bigger than a golf cart. The i-MiEV Evolution could improve that image, even though it would be hard to mistake it for a stock i.