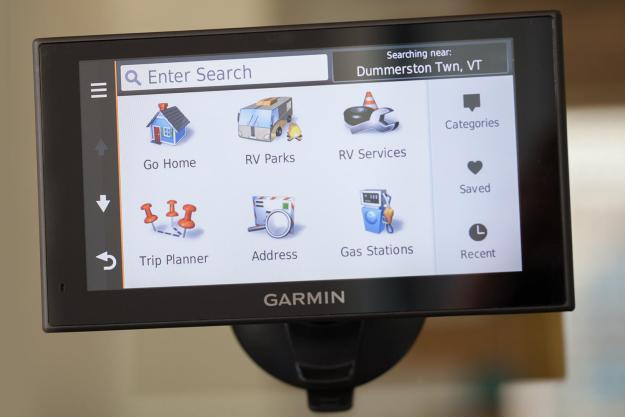 “Garmin’s latest is uniquely built with mobile homes and trailers in mind -- but mixed navigation results hold it back from excellence.”

Stranded RV’s stymied by a low-slung covered bridge are a regular sight in my neck of the woods. Most are victims of navigation programs that fail to account for the special needs of highway caravans, which is where Garmin’s $330 RV 660LMT comes in. It’s designed to address the particular needs of RV owners. Unfortunately, the RV 660LMT delivered mixed results in our road trips.

The 660V has a 6-inch touch screen and includes a solid suction mount that remained steadfastly affixed to the test vehicle’s windshield for hundreds of miles. A 12-volt car adapter cord is included, although it doesn’t include an extra USB plug (something I find helpful given the limited number of plugs for charging in most vehicles).

Owners can select the size and type of vehicle being driven, such as a motor home or trailer, so that the 660 will base its routes on the specific RV. The idea is to avoid roads with height and weight restrictions that may not otherwise apply to smaller cars and SUVs. The 660LMT will also warn you of sharp curves and steep grades that may prove problematic for big Winnebagos and oversized motor coaches.

To supplement life on the road, the 660LMT also includes among its points of interest a directory of RV parks, and service and repair locations. You can search campgrounds according to specific amenities, including water hookups, Internet access, and electricity access. Garmin has also added FourSquare recommendations to the portable navigation device (PND).

Navigation features include lane guidance for complex intersections, voice recognition, free traffic data, and lifetime map updates. Map updates are installed via a PC, where you can also choose to add customized vehicle icons (rubber duckies to big rigs) and a couple of free voice options, such as using a Yeti to growl instructions at you.

Over several road trips over several hundred miles along the Eastern seaboard, the Garmin 660LMT’s GPS receiver proved to be sensitive and accurate. In fact, it managed to acquire a signal in many remove locations where other PNDs have failed. In fact, the GPS radios seemed more sensitive than most, picking up a signal in some places where other PNDs have failed to make a connection.

The 660LMT will warn you of sharp curves and steep grades that may prove problematic for big Winnebagos.

Comparing it to familiar routes, the Garmin navigation system generally steered me in the right direction, avoiding construction on I-95 and lengthy delays in New Jersey. There was plenty of warning about impending lane changes and divided highways (it gave me more advanced notice than a built-in nav system I was using for reference, for example). Audible instructions were clear and loud enough so that I didn’t miss a turn. The 660LMT’s updated traffic reports also seemed to be in sync with the likes of live, crowdsourced smartphone apps such as Waze, although in theory, Waze should be better at warning about sudden congestion spots. (The Garmin device uses Here’s traffic reports via a built-in FM radio data system receiver.)

The RV 660LMT also accepts voice instructions, which we frequently availed ourselves of. If you can keep people quiet in your camper, simply say “Voice command” to initiate the voice recognition system. It’s limited to specific commands based on a limited lexicon, such as “Start new route!” But overall, I found it effective and easy to master.

One additional highlight in testing was the Garmin RV 660LMT’s notifications about impending speed limit changes. Warnings appear in an orange bar across the top of the screen, which drew my attention and gave me enough time to start slowing down. Should you exceed the posted speed limits, your mph is noted in a red square in the lower left of the screen.

Drivers may at first be confused by the RV 660LMT’s choice of some seemingly odd routes until one realizes that the nav system is trying to circumvent problem areas, such as the low overpasses on the Merritt Parkway in Connecticut. In tests, I set the parameters rather high, specifically for a tall vehicle rising up to 11 feet 7 inches tall. Most of the time, I was directed to friendly highways…until it came to a covered bridge in Vermont. Unfortunately, even though the bridge has a maximum height restriction of 11 feet, the Garmin RV 660LMT directed me to drive over it. For an RV owner, that could have been a costly mistake. Furthermore, at one point when I ignored a route instruction, the nav system tried to direct me to a narrow dirt mountain road, a decision that would have been at the very least uncomfortable for an RV of any substantial size.

You need an espresso machine for your vehicle.

Grill in style at the campgrounds

Easily rent RVs from owners, anywhere. Find the perfect RV for your next adventure

As a standalone navigation device, the Garmin RV 660LMT has many strengths to recommend it over smartphone navigation apps. The 660LMT is big, bold, and loud with a GPS receiver that’s more accurate and quicker than what a smartphone typically offers (it constantly beat the direction from a Samsung Galaxy S6, for example).

Unfortunately, when it came to specific RV routes on back country roads, it fell prey to some of the same obstacles that have tripped up conventional nav systems. More detailed mapping work, at least covering more obscure roads in the Northeast, appears to be needed.