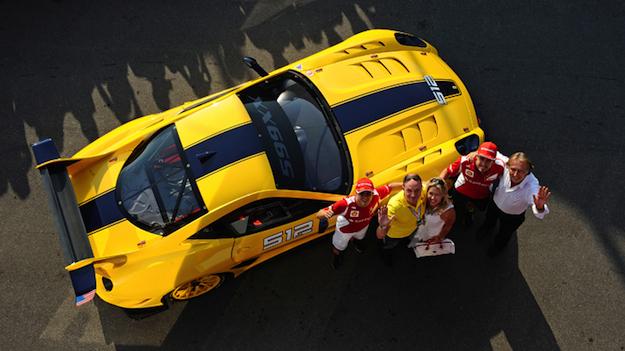 Google’s Vice President of Engineering, Benjamin Sloss, picked up a new car this weekend, and had a couple of pictures taken at the same time.

Lucky him, you’re probably thinking, and are about to skip to the next article; but hold on, this wasn’t a trip down to his local dealership, and the car wasn’t a Prius, a Corolla or even something slightly interesting like a Tesla Model S.

No, he was collecting a Ferrari 599XX Evo, which was be presented to him at the Monza Grand Prix circuit in Italy, on the same day as the Italian F1 Grand Prix. Oh, and the photos would be with Ferrari F1 drivers Fernando Alonso and Felipe Massa.

Sloss paid 1.4 million Euros — that’s $1.79 million, currency conversion fans — for the car at a charity auction back in June, the proceeds of which went to an earthquake relief fund for those affected by the quake in the Emilia Romaga region of Italy in May.

To make a 599XX Evo, you take a 599XX, which produces 720 horsepower from its 6.0-liter V12, then reduce the weight by 35kgs, up the power to 740 horsepower using a side-exit exhaust and liberally sprinkle it all with proven F1 technology.

Besides the wheel “doughnuts” fitted to the 599XX — used to reduce drag and cool the brakes — and active suspension, there’s a DRS-style active rear wing, which pops open at the press of a button to reduce drag at high speed.

The results are impressive to say the least, with 0-60 taking 2.9 seconds, and a top speed of 196 miles-per-hour. Additionally, 599XX ownership buys you entry into the Corsa Clienti, an exclusive club for Ferrari FXX and 599XX owners.

This is a good thing, as the 599XX and the 599XX Evo aren’t road legal, and these Ferrari events are the only time owners get to drive their cars, where they’re supported by a team of Ferrari engineers and test drivers.

To help Sloss’ 599XX Evo stand out amongst the other cars — although only 30 of them have been produced — it has a commemorative plaque signed by Ferrari chairman Luca di Montezemolo and F1 drivers Alonso and Massa.

As weekends go, this one sounds like a good one.

Topics
Ferrari LaFerrari FXX K priced at $2.7 million, already sold out
The king has arrived: 1,050-hp LaFerrari XX coming this December
Ferrari to use Formula 1-derived turbo V6 in hardcore LaFerrari XX
What a bargain: only $7.5-million for a stripped-down, lighter-weight version of the LaFerrari hypercar
Uber says it’s investigating ‘cybersecurity incident’
Nvidia’s Drive Concierge will fill your car with screens
The Uber hack is an outrageous tale of a teen hacking for fun
Tesla to fix window software on 1M of its U.S. cars
Lux and refreshingly livable, Mercedes’ EQE moves EVs mainstream
How to watch Tesla’s AI Day tonight and what to expect
2023 Audi Q4 E-Tron first drive: the predictable and traditional EV SUV we need
We need more 7-passenger EVs, but the 2023 Mercedes EQS SUV has room to improve
Tesla AI Day 2022: Optimus, self driving cars, and everything else announced