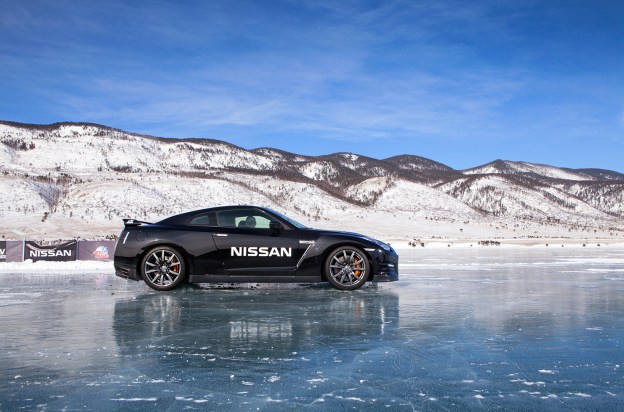 For centuries, Russians have been trying to find the best way to cross Lake Baikal, the world’s largest freshwater lake. Boats work fine during the summer, what about the winter?

A railroad was once built on Baikal’s frozen surface, but it didn’t last very long. Fast forward to 2013, and Nissan has come up with a way to cross the lake that is much faster, and doesn’t involve falling into the freezing water. It’s called a Nissan GT-R, which recently set an on-ice speed record for Russia.

Driving on ice is tricky business, but the GT-R’s all-wheel drive system helped to keep it pointing in a straight line, while the 540 horsepower and 463 pound-feet of torque from its twin-turbocharged 3.8-liter V6 created some serious velocity.

Still it, wasn’t exactly a drive to Starbuck’s.

“Every moment you drive, you should adjust the steering wheel,” Rusinov said. “The slightest gust of wind makes the car lose the track.”

So Rusinov’s run was an impressive testament to the synthesis of skilled driver and high-tech sports car, but the GT-R isn’t the fastest car on ice.

That honor still belongs to Juha Kankkunen and the Bentley Continental Supersports convertible he drove to 205.43 mph in Finland in 2011.

Nissan is claiming the GT-R’s 182.8 mph top speed as an on-ice record for Russia, which is still something. Reaching that speed on ice is pretty impressive, even if it doesn’t set a world record.

Under normal conditions, the GT-R can do 0 to 60 mph in 2.8 seconds, and reach a top speed of 190 mph. So not only did Rusinov go much faster than is strictly sane on Lake Baikal, he also brought the GT-R very close to its actual top speed.

Check out this video of the GT-R on ice, and tell us what you think in the comments.